Apparently the Bengals are one of three teams that Anthony Collins is choosing.

Share All sharing options for: Anthony Collins choosing between Bengals, Panthers and Buccaneers

We get the game. We understand it. Add teams to a repository of those interested in a player, the more certain teams may add a few dollars and coins to their respective offers. That's how the free agency game works. 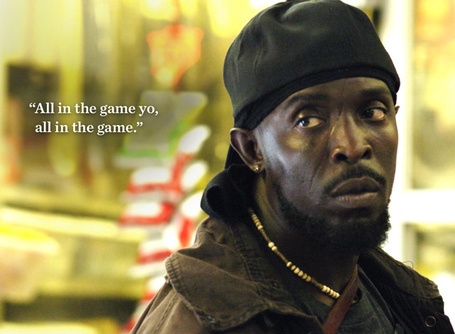 (Continuing our Wednesday night theme of The Wire)

Earlier on Wednesday we asked, "what's the hold up with Anthony Collins."

Long long day with MJ, Clinton, and silly AC (soon to be Bengal, Panther, or Buc). AC wouldn't tell us where tho.. pic.twitter.com/uzFDy2hJp6

We've known about the Buccaneers. The Bengals are in, per former Bengals defensive tackle John Thornton. And so are the... Panthers (who had their $18.3 million-under-the-cap figure smoked after Greg Hardy's $13 million franchise tag). According to Over The Cap, the Panthers currently have $5 million against the cap. On the perceived $6-7 million/year average being speculated, it could work with a minimal base pay in the first year.

We'll see about the Bengals though... Collins-fatigue is starting to set in.

I can confirm that free-agent tackle Anthony Collins is choosing between Bucs, Panthers and return to Bengals. Offers have comparable money.