Is Keith McGill the next 2nd round Gem? Analysis of his game tape, strengths, weaknesses, and why I believe the Bengals covet him.

He has great length and speed for a bigger CB.  He has great leaping ability and can break up plays even when he is behind the action. (Showcased in breakdown)  Versatile player and could end up as a corner or a safety in the NFL.  He has great recovery because he is so physically gifted. He has pretty good hands capability to locate and track the ball.

Has been compared to Richard Sherman because he is so big, it's safe to say if he ends up to be 95% the player Sherman is he will be a good player.  With his size he is ideal to cover the bigger WRs and TEs that split out wide in today's style of play.

With his height and leaping ability if he works on his skills to be great at coverage he will win every 50/50 ball that is thrown his way.  He is very rangy and has good timing of his jumps maximizing the radius he can deflect balls.  He has the potential to be a shut down corner in 2-3 years.

He has such good athleticism he sometime gives too much cushion to the WR and gives up easy dig routes and back shoulder throws. His mechanics are not great so can get caught on blocks because his technique is bad or doesn’t notice the run play soon enough.

He is great as a press man corner so you would expect would play the run well but he actually struggles in the run game, that will have to be coached up.  He comes in with similar footwork concerns like Dre did when he came out.
For a big corner he is not strong against the run. He transferred to Utah from Junior college so has limited time at the top level of college football.

Had some injuries early in his career so that may concern teams, shoulders can be troubling and linger for secondary players.

Key plays picture breakdowns below (times from link in parenthesis)

Pass breakup because of excellent recovery: 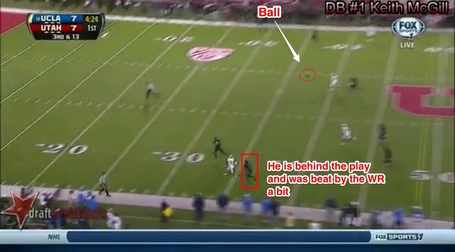 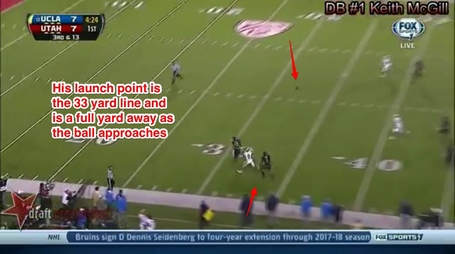 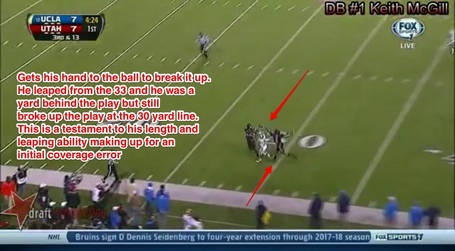 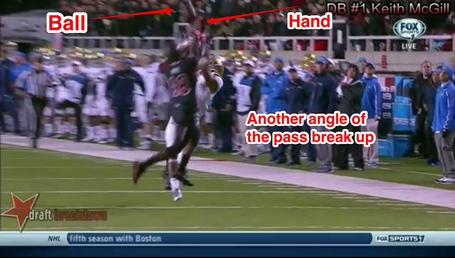 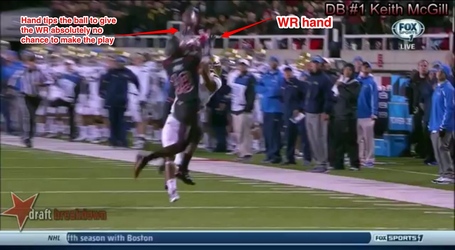 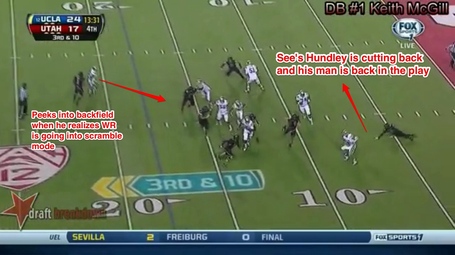 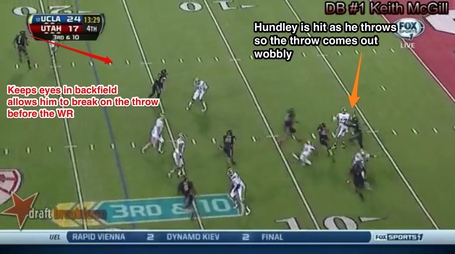 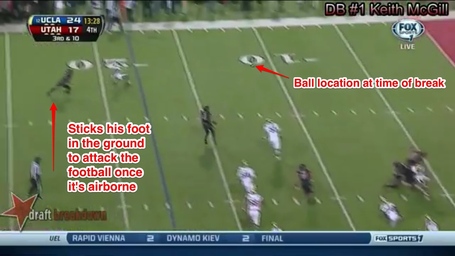 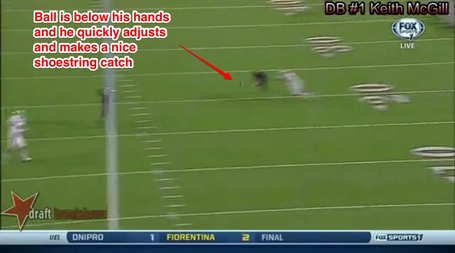 1) Misreads run vs pass and give up rushing TD to the QB (0:12) see full picture breakdown

2) Opened up hips to QB and gives up easy completion underneath. (1:10)

5) Good break on a pass attempt and breaks up the play on the out route. (4:50) uses outside hand instead of inside hand or he would have gotten the INT. 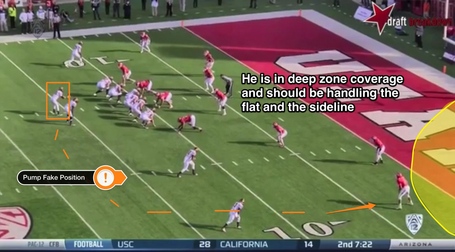 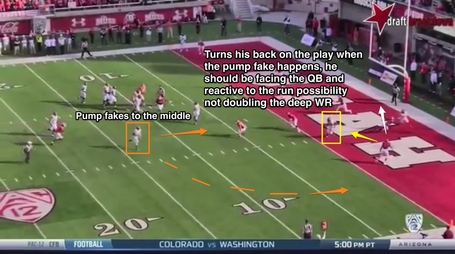 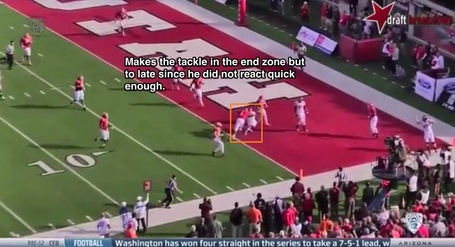 Pass breakup and near INT 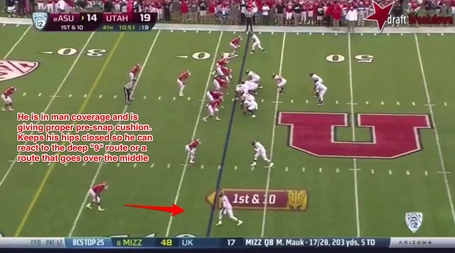 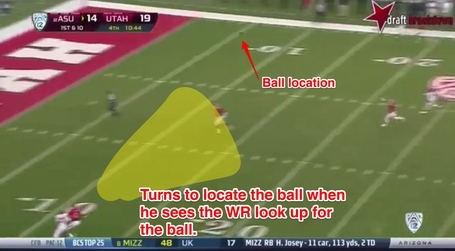 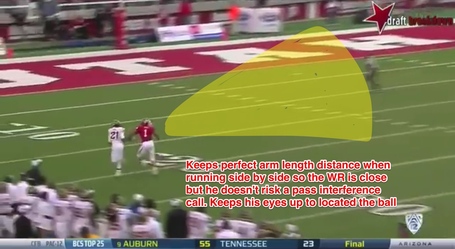 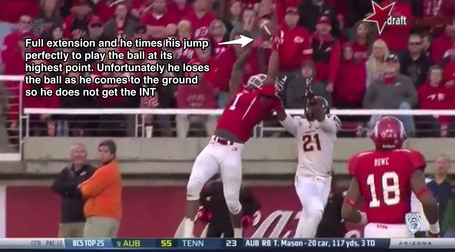 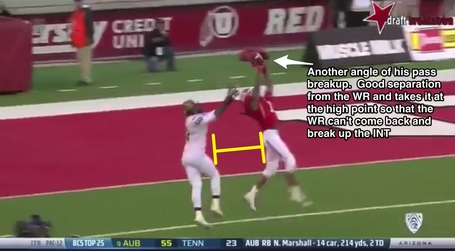 He is project type that will need time to learn but he is a physical freak. He'd be a similar pick to Michael Johnson in 2009.

He is the best of the "big" corners but still needs to be molded to be an NFL CB.  He could still contribute in year one because of his athletic ability he can make up for errors as shown in the breakdown above.  He is a great fit with the Bengals for multiple reasons.

McGill is really big, has abnormally long arms, and he is good in man press coverage. This is the Bengals preferred defensive set so his learning curve will be reduced.  He is probably a year away from starting because he is so raw, but the good thing is the Bengals don't "need" a CB right now. They just need to get younger.

They still have Adam Jones and Terrance Newman but they are getting long in the tooth but, have shown they can and will help out young CBs. He could learn behind them and play special teams and some situational packages like Hunt did last year. With his size, he could end up at safety or corner at the next level.

This is why he is the perfect pick in the 2nd round for the Bengals. When Marvin actually says something in a press conference what does he talk about as it pertains to personnel...versatility of the players.

He played well against Shaq Thomas in the UCLA game which shows he can play against top competition.  Coach Joseph will have his work cut out for him if they make this pick.

He really needs to improve his footwork and his hips. This is my biggest concern with his game. We have all seen how much Dre has struggled to improve his footwork. However, if they go a different direction then secondary in the 1st and he is available at pick 55 he will get serious consideration.  Could McGill be the next 2nd round Gem that the Bengals uncover?

Leave your comments and feedback below or tweet me, I welcome discussion on the article.

These screenshots came from videos from www.draftbreakdown.com