A look at the notable offensive line prospects in this year's NFL Draft.

The Bengals are in a flexible position when it comes to drafting an offensive lineman. Andrew Whitworth can play LT or LG and Mike Pollak is currently penciled at C, but can start at LG if needed. They like last year's 5th round pick Tanner Hawkinson and he could start at LG if they had to play today.

Look for Cincinnati to draft a development LT that could replace Anthony Collins. They could also find an upgrade to Clint Boling/Hawkinson at LG. Maybe they take a C, but this class is particularly weak again and I expect every Center to be overdrafted. Versatility is key. If a lineman can double at another position, the Bengals will have more interest. 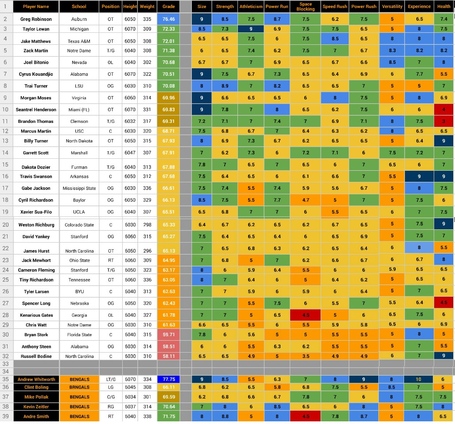 *Majority of scouting and analysis work done by Ryan Coyle (@RoyleRedlegs) with guidance from Joe Goodberry.*

Most devastating run blocker I have seen at tackle in college. Plays with anger and leverage...two things that get ends killed. Strong punch. Incredible base and hip roll. Inexperienced. Needs refinement but nothing that can be fixed with reps. Athletically gifted enough all things are possible with him in pass pro.

Lacks ideal length given his size. Possesses all the physical gifts in the world but needs refinement. Character red flags. Needs to strengthen his lower body and base.

Lacks ideal length and strength. A bit softer than you would prefer. Technitian who won't ever be a mauler. Best suited in a ZBS where he can use his athleticism and technique more. Maybe even at LG.

Can play any scheme at multiple spots. Should get a chance at tackle despite less than ideal length. Displays great awareness and footwork. Uses his hands well and has a good base. Better run blocker than anticipated.

Like Martin can play any scheme and has been worked out all across the line. Displays great footwork and punch. Needs to get stronger but has the basics of OL play down and can be a great player. Likely to end up inside due to his lack of length. All upside type of player.

As gifted as any tackle in the class, health and inconsistent footwork will hold Cyrus back at first. Can be devastating in the run game and shows the upside you need at LT for pass pro. Everything here is coachable.

Inexperienced guard with all the upside in the world. Terrific size and athleticism. Displays a great punch and good use of leverage. Quick to the second level. A real dick at times. Has lapses in technique but it's expected for a sophomore. Shows ability to handle speed and power rushes and can reset.

Probably the best pass blocking LT. Needs to develop a desire to run block. Could be a top 20 talent if he did. Incredible use of his hands/length in pass pro. Absorbs and directs traffic. Dominated games against very talented rushers

Mammoth of a man. Very strong and very athletic for his size. Has to dedicate himself to the game to untap all the potential here. Injuries, off field issues will plummet his stock to the later rounds. Talent alone is top of the class worthy.

Very talented and underrated. Has the length and agility to play the outside but struggles when defenders go inside on him. Plays with an attitude but could stand to play with more leverage at times. Quick to the second level and squares off his block. Strong punch and good hip roll.

Most gifted center in the class. Best athlete of the bunch and strongest on the field. Very raw at center and it shows. Gets turned around too often.

Small school prospect who lacks refinement but has all the traits of an NFL lineman. Plays with an attitude but gets out of control and will miss some blocks. Needs to get stronger in his core to stay in control. Has a good punch and doesn't reach. Good hand placement and quick choppy

Great athlete with quick feet and agility. Bends well and moves in space. Quick step back on pass pro and has the size/athleticism to recover. Doesn't play with great leverage in the run game and doesn't generate much movement there. Could see time at tackle or guard in either scheme.

Right on the heels of Billy Turner as best small school prospect on the OL. Dozier plays with attitude and aggression. A bit more controlled than Turner, he has a good punch and good base. Strong drive in his lower body. Was a man playing with boys. Quick feet at the second level. Needs to get better recognizing blocks.

Good size and very experienced. Technically sound blocker, but not explosive and doesn't create lanes in the run game. Punch is only mediocre and his base lacks drive. Solid in pass protection being able to absorb and redirect. Won't fit run-heavy schemes.

Bobbie Williams clone. Heavy hands and heavy feet. Wins with strength and leverage. Will struggle with speed at the next level. Likely won't be a pulling guard. Limited scheme wise to power.

Got very overrated then torn down. Very good run blocking guard who will look better outside of the Baylor offense in a power scheme. Good trap blocker. Limited to a power scheme. Will struggle with speed as he stops his feet on contact.

Hardest grade for me. I see the run blocking everyone likes, but I don't get blown away by his pass pro skills. Partially because he was overwhelmed when asked to play LT due to injuries. Doesn't look the part. Upside is on his side. Could fit in either ZBS or power run scheme.

Okay at everything, great at nothing. Richburg is a safe center. He won't ever be great in any one aspect but he's dependable and can probably work in ZBS or power but most likely ZBS is his best fit.

Despite the talk, he's only an alright pulling guard. Doesn't generate much movement if any. Lets defenders in on his body. Plays off balance at times. Feet are slow at the second level. Strictly a guard at the next level.

Once highly thought of prospect. Suffered an injury later in the season. Shows the promise to be a quality NFL player. Might be better suited at guard than tackle. Has the base that can be built on in the NFL. No real holes but nothing stands out either.

Mewhort should be able to contribute as a RT pretty early. Nasty in the run game, he could get some looks at guard but wouldn't be comfortable unless he plays with a better pad level. Doesn't seem to have the feet to be a LT.

College tackle who has to move into guard at the next level. Can't hand outside rushes. Not a very powerful blocker. Could potentially be scheme versatile.

Very good weight room strength and seems like that is what he relies on. If he can't win with strength he seems beat. Doesn't seem comfortable in pass pro at times. Knee issues?

Could develop into a solid starter if he can work around length issues. Strong. Solid base. Power run center. T-Rex arms will hold him back. Too easy for defenders to get into him and shed him.

Hard working gritty player. Walk on at Nebraska. Good movement in the run game. Solid punch and base. Needs refinement in pass pro and won't offer too much 2nd level blocking.

Bengals two-fer. College tackle who likely kicks inside in the pros but has the versatility to be an emergency tackle. Paul Alexander will fall in love with that ability. He's a bull dog so that's a plus too. Good run blocker. Struggles with outside speed and recovering once beaten.

Has no glaring weaknesses but isn't exactly good at anything either. Dependable spot starter and backup type.

Excellent size. Only average strength. Seems to have narrow base, broad chest. Lowers his head too often and leads to him ending up on the ground. Developmental type. Probably better college player than pro prospect. Tons of talent around him at FSU.

Shortest arms of OL at the combine. While technically sound, this will hinder Steen in the NFL a great deal. If he can't immediately lock on and win with strength/leverage, struggles to secure the block. Likely limited scheme wise. Could maybe slide into center.