Garrett Scott has the size and look of an NFL OL. He played tackle at Marshall but could easily be looked at as a pulling guard in the NFL. Has long arms and holds his weight very well. Not a lot of excess weight.

Scott absolutely needs to improve here or it will be his down fall. In the run game, he struggles to apply his strength to functional field strength. Often not getting a push or being able to move defenders. In pass pro he shows better core and anchor strength. This isn't where he wins.

Very athletic on the field. Quick feet, displays above average balance. Moves very well. Quick to the second level and getting to the LB. Good body control when in space.

His weakest attribute. Needs to build lower body and upper body strength. Doesn't get a great punch and doesn't have great drive. Technique seems alright but gets sloppy at times. Driven backwards by power moves too often. Needs a better get-off on the snap to make up for lack of strength.

First move off the snap is up, not forward. Not a great start here for Scott. 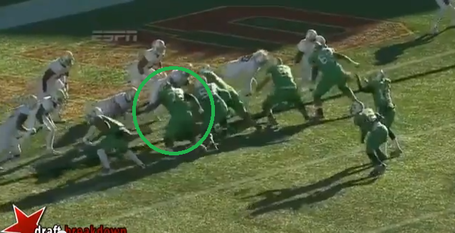 His second move is leaning forward and dropping his head way too low on the defender with his hands out wide and giving the defender the advantage. 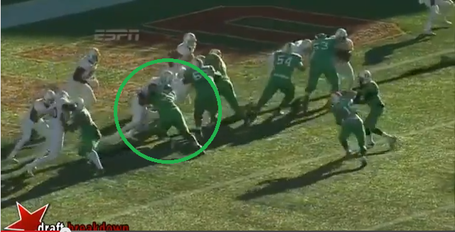 With his head down, Scott can't stop the defender from ripping across his face and getting off the block to shut the lane for the RB down immediately. 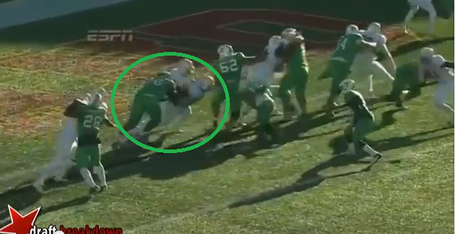 Now Scott is completely off the block and the defender is making the play in the hole on what should have been an easy run for a short TD. 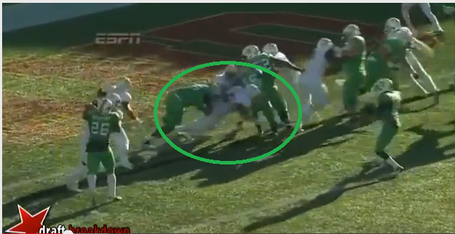 This is the first area where Scott will make his living. Very quick active feet. Doesn't let his feet get heavy. Excels getting to the second level and taking out the LB. Pulls effectively is out of his stance quick. Rarely misses a block on the move. Good body control and awareness to not let defenders cross his face.

Nothing overly fancy here, Scott pulls from the left tackle spot, and picks up the edge player who is breaking a block. 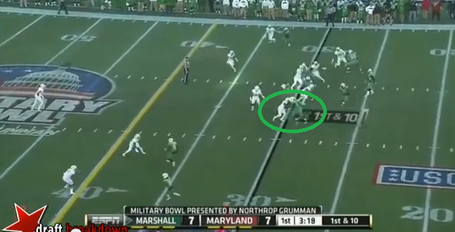 Rides the defender out and gives the runner his lane. Again, not fancy but highlights his awareness in space recognizing the edge wasn't set and needed to get that block in. 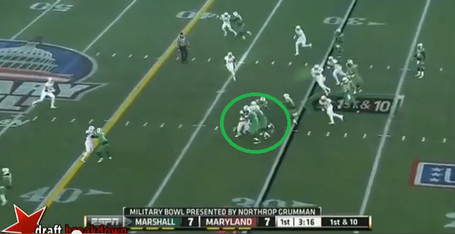 Power Pass Pro:
Anchors surprisingly well given his lack of strength run blocking. Able to use his core to recover when beat initially. Occasionally his hands get wide but majority of the time he keeps them in tight. Susceptible to the bull rush at times.

Excels here. Quick back and into his stance. Scott mirrors defenders with ease. Capable of making a good recovery when defenders make the inside move with his strong inside step. Active hands and quick feet to stay with blocks through the play. Seems to frustrate ends with his athleticism here.

Scott starts with his good strong kick back, keeping a hand on the defender. 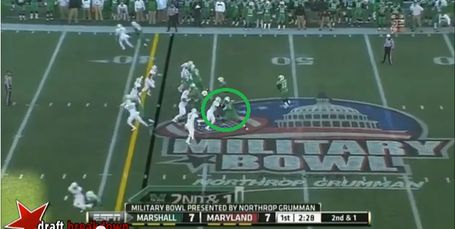 Recognizes the inside move, he corrects himself and squares himself to the LOS. 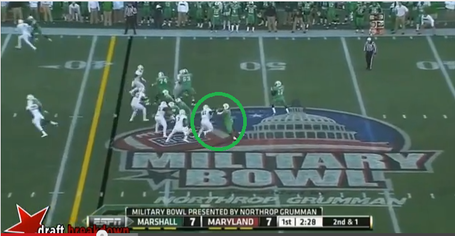 Steps hard to the inside to take away the direct lane to the QB and stops the rush. Another case showing the heads up play and awareness Scott brings to the table. 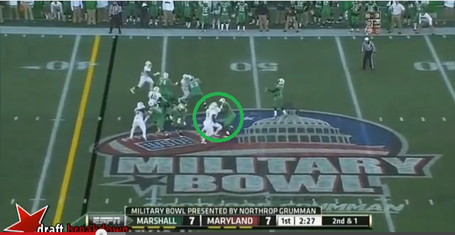 Where does he play?

Garrett Scott is a versatile player who could easily be seen as a reserve at both tackle and guard. With his ability to pass block and block in space, you can find roles and positions for him. He has upside enough to potentially start in this league if he can find a way to be an average blocker in the run game. As a rookie, he would more than likely be the backup for Andrew Whitworth at LT and Clint Boling at LG and probably push Boling at guard pretty steadily likely earning time.

Scott's run blocking is bad. Really no way around that and it was against less than stellar programs. It's a big concern going forward but he is worth the investment late to surprise in the NFL. Outside of the run blocking, Scott doesn't have much in the way of bad tape. Playing at Marshall he didn't always play great competition. As a late round player, you could do a lot worse. A hell of a lot.

Scott isn't exactly a killer in the run game, but he doesn't give up on blocks and is capable of being aggressive and showing that side at times. Not afraid to get the last word in.

We like guys who offer flexibility on the OL. Scott gives us that in droves. We also have a knack for smaller school OL late. Scott fits the bill of what we like in lineman especially late and it shouldn't be a surprise we have interest.

Scott is a talented player but is flawed. He's a late round (6-7) prospect with enough upside to get heavy consideration and be worth the pick. His space blocking and pass protection will work in the NFL. It's just whether or not the rest will catch up. Being an under the radar prospect from a moderately small school like Marshall makes resources hard to come by for Scott. He didn't get a combine invite.