Breakdown of Darqueze Dennard's college career, how he is a scheme fit, and what he will need to do to excel at the NFL level. 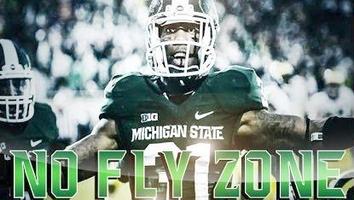 Darqueze Dennard
5'11"  199 lbs
40 yard dash: 4.51
Bench press: 15 reps
Initial Thoughts:
As the draft began on that fateful Thursday night the Bengals brass were hoping that maybe, just maybe, one of the top CBs would fall to them.  For that to happen they were going to need some luck and a lot of it, or so it would seem.  As most Bengals fans I was thinking we would need a run on quarterbacks to have a shot at the top 3 corners.  The top ten rounded out and only Bortles was off the board, I was extremely nervous.
I had pretty much written off the notion that Dennard or Fuller would make it 14 more picks. The Bengals watched their board as names they had ranked in the teens kept being taken. Then the Bears pick Fuller at 14 and the #7 prospect on their board was gone, yet one name remained Dennard.
The Steelers are on the clock and have a need at corner with an aging secondary they surely will take Dennard.  I mean how many years have they taken guys after the Bengals that turn out to be great, and we are left with guys like Keith Rivers?  This was their chance to stick it too the Bengals, to take the last top tier corner and leave us hanging out to dry.....right?  The pick comes in and what?
It's Ryan Shaizer.
I felt like Lloyd Christmas "so you're telling me there's a chance." The picks keep coming in and as the entered the 20s the Bengals war room had to be clutching the Dennard magnet trying to work some kind of voodoo on it.
Then Cleveland trades back into the first so Philly isn't there to take a CB, and the Bengals get the guy #8 on their board at pick 24.
In the end they got one of the top football players in this draft at pick 24, a guy that comes in polished and ready to contribute Day 1 if he needs to; Below I will show you why.

He excels in man press coverage (Bengals primary defense) and is good in man off coverage too. He will come up and help support the run, is a physical corner that will hit you if given the opportunity.  He stays close to the receiver at the line of scrimmage and does a great job of jamming the receiver to slow them off the line.  Has a fluid and controlled backpeddle and comes in pretty polished technically.

He has great instincts and recognition skills of routes.  He plays to the whistle and fights to dislodge the ball all the way to the ground. He is great at stripping the ball away from the receiver pre and post catch.  He played big when the lights were on, had 2 interceptions in the outback bowl vs Georgia and Aaron Murray.

Was solid in the Rose bowl vs Stanford and got them to that game by shutting down his side of the field vs an undefeated Ohio State team (Too soon?).  He has good hands and body control in the air, he does lose focus and drop the easy interception every once in a while.

Exceptional after the catch at directing traffic during the run back on interceptions, is patient and crosses the field to gain more yards. He is very Ed Reed esc in his returns; who was also selected with the 24th pick in 2002 I might add.  High character player and is a natural leader teammates gravitate to him and look to feed off of his energy.

Good study of the game he improved every year at Michigan State so one can only think that trend will continue in the NFL.  Plays with swagger the Michigan State secondary was know as the "no fly zone" and they enforced it, and when they laid the wood on you they let you know about it!

He didn't play much zone coverage but from the time he did he is better suited in man coverage. He lacks elite speed for the position, so he has to use technique and physicality to make up for it.  He will need to work on his downfield grabbing and hand location to avoid costly pass interference calls at the next level.

He should model his game after a guy like Richard Sherman who has become one of the best at walking the fine line of being physical vs pass interference. His durability is a concern he missed games throughout his college career (5 in 2010, 3 in 2011) and had to have double hernia surgery after the 2013 season. He is a little stiff with his change of direction.

2) Reads the QB and breaks on pass, makes the interception, then picks his way through traffic for 96 yard TD 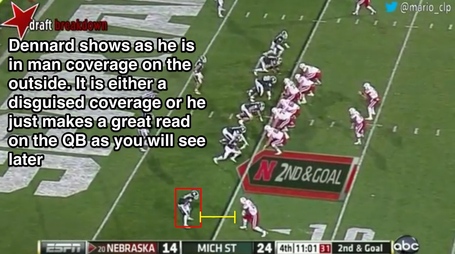 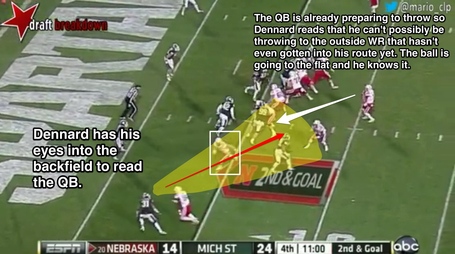 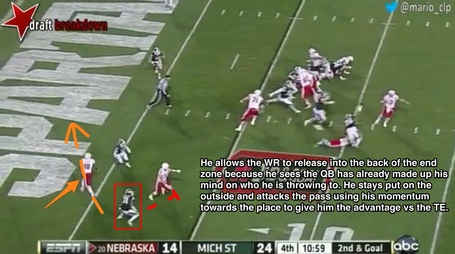 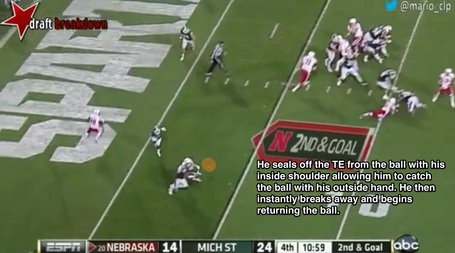 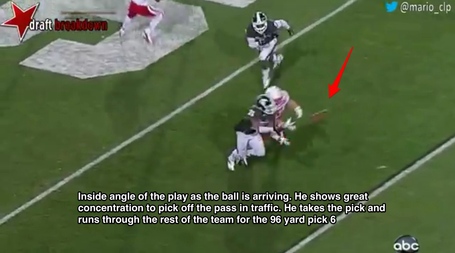 Key Plays vs Notre Dame:
1)  Has his back to the play and breaks up the pass, but he never turns back to see the ball and that is a recipe for pass interference in the NFL (1:08)
2) Gets called for defensive holding and is too grabby on the play (2:30)
3) Does a good job of recognizing the run play and fights through the wash to make the tackle (5:11)
4) Battles with the receiver throughout the route rips the ball out as the receiver is headed to the ground fights all the way to the whistle (7:50)
5) Makes a good and bad play in the same motion he pulls the receiver down getting a PI call but then makes a tough catch and has a great run back on the play (8:50) (gif below)

Key Plays vs Ohio State:
1) Great coverage that results in a coverage sack for the team (0:43)
2) Correctly picks up the TE and covers him down the seam (1:16) (something this team needs)
3) Doesn't give up on the play just because the run is away from him, he rushes back across the field to make the tackle (1:55)
4) Jams the receiver at the line of scrimmage then follows the deep receiver to force the short throw.  Comes up and makes the tackle and strips the ball
5) on the long pass downfield he fights for correct position and uses proper technique to knock the ball away with his inside hand. (2:38) (Play breakdown below)
6) Breaks back on the pass and disrupts the play
7) Good downfield coverage to close out the game (5:15) 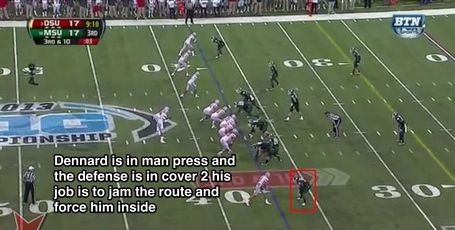 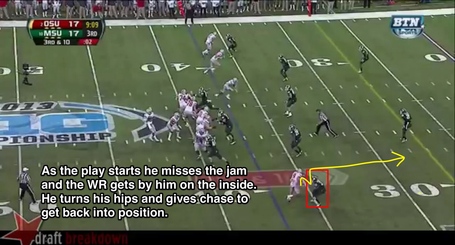 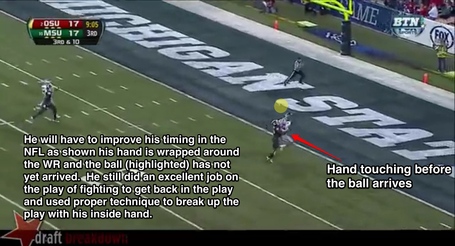 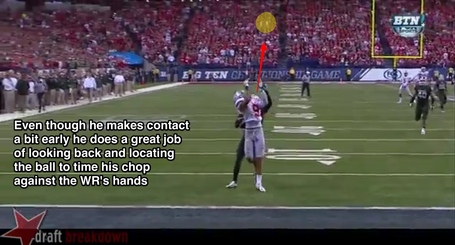 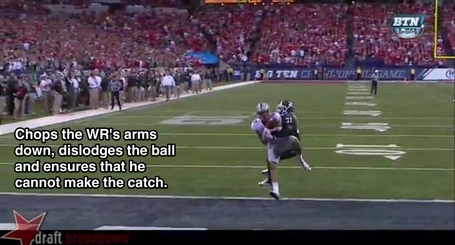 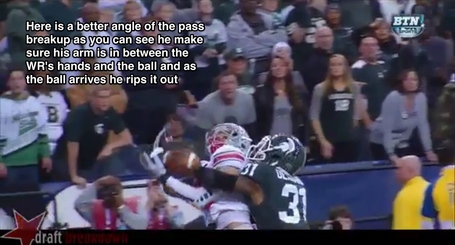 Key Plays vs Iowa:
1) Opens his hips and keeps his eyes in the backfield and breaks on the throw for the INT (0:28)
2) Reads the run and sheds the blocker to make the tackle (1:14)
3) Times the blitz well to comes off the edge, once he sees he is not going to get the sack he gets his hands up to try to deflect the pass. (2:15)
4) Gets beat in coverage and hustles to get back into the play and gets his hand on the pass but the receiver makes a difficult catch. (2:40)
5) Makes a huge hit on the receiver after the catch, keeps his eyes in the backfield that allowed him to break on the play before the first down. (3:40) (gif below)
6) Makes an interception in tight coverage to seal the win (4:30) (notice the trend...he is a finisher) 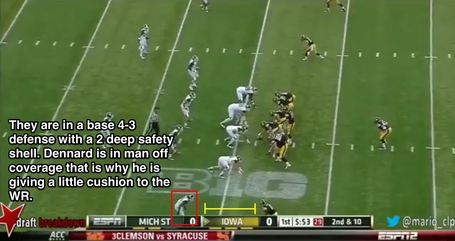 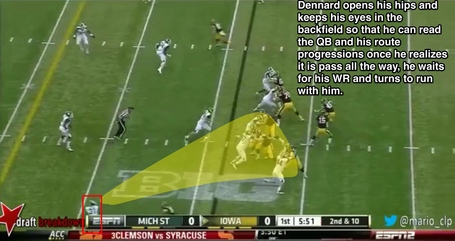 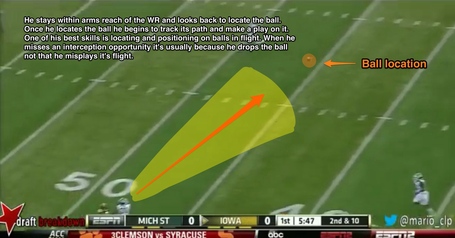 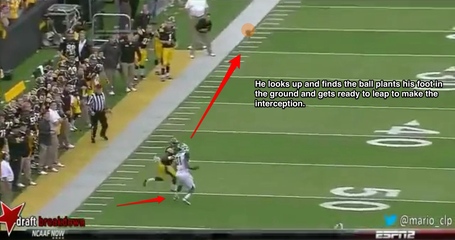 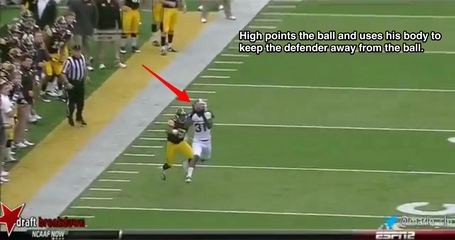 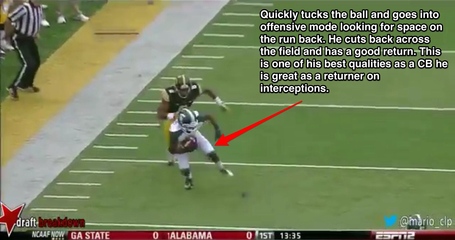 Key plays vs Western Michigan:
1) He jams the bigger faster receiver and jousts with him down the sideline.  This shows he can learn to walk the line of battling for position vs getting a pass interference penalty (1:38) (gif below)
2) Gets called for pass interference for holding the jersey (2:15)
3) Good pass break up on an out  route, he does not let the receiver box him out of the play (2:55)
4) Runs with the receiver in man off coverage (no jam) and locates the ball to break up the pass (5:02)

This was the ultimate no brainer pick for the Bengals this year, they would have been crazy to take anyone else at pick 24 given the circumstances.  Yes, Bridgewater was available and you could argue to take him if you are not a fan of Dalton, but not when a player you have #8 on your board at a position at need is available.

It's a safe pick for the Bengals because he played a lot of college football so they pretty much know what they are getting.  Even if Dennard struggles at the pro level no one can really look back and judge this pick because I think about 30 GMs in the league in the same situation would have done the same thing.

Dennard is a hell of a football player, he is physical and it is almost like he was groomed to play AFC North football. He is a gritty player that works hard to earn every thing he gets.  He didn't have a college scholarship offer to a D1 school until Michigan State came to scout the receiver he was playing against during his High school game in Georgia.

What did he do, well he shut him down and got that scholarship offer for himself.  At Michigan State they play hard nosed defense and rely on their pass rush to disrupt quarterbacks.  This allows the DBs to make plays on the ball when the quarterback makes a mistake.  He is a fierce competitor that has played in rain, sleet, and snow just like he will be asked to do in the AFC North.

I really think this pick is going to benefit the Bengals in multiple ways.  I think that Dennard actually plays with the swagger that Dre talks about, and together they will push each other and grow into quite the duo.  To me Dre seems a bit like Robin and now he just got his Batman together they will fight Ray Rice crime with in the AFC North.

Dennard could have been argued as the best corner in the draft and before the whole draft process no one had him outside of the top ten in their mocks.  He is not a guy that is a combine machine, and he had the most game tape so I feel like teams nit picked him a bit causing his stock to fall.

His footwork is great and he knows how to play to his skills; he jams receivers to slow them to make up for his lack of straight line speed.  He is a team player and will sacrifice his body to make the right play for the team.  An example is throwing his body at a larger blocker to seal the edge and force the run back inside, or hitting larger backs head on to slow their momentum.

Dennard is a tenacious competitor and fights all the way to the whistle.  When I watch him he plays a lot like Ed Reed, he is always going for the strip of the ball and as soon as he makes an interception he has one of the quickest switches to returning the ball I have seen.

He comes in ready to go day 1 and fills a team need at a great value from the spot he was picked.  He is a great character guy for the locker room, and a natural leader on and off the field.  He is a hard worker and a smart football player he is only going to get better.

Don't be surprised if Dennard joins Geno, and Vontez, as backbone of this Bengals Defense in 2 years.  If that is not a Christmas gift wrapped up with a bow on it in May, call me crazy.  All I can say is I am happy the other 23 teams passed on Dennard and Bengals Nation should welcome him with open arms, simply put he is a STUD!

Leave your comments and feedback below or tweet me, I welcome discussion on the article.These screenshots came from videos from www.draftbreakdown.comCombine stats courtesy of www.NFL.com
Follow @codiki for questions about the article and other Bengals draftees