A look at the notable cornerback prospects in this year's NFL Draft.

It's now time for a look at this year's crop of cornerback prospects: 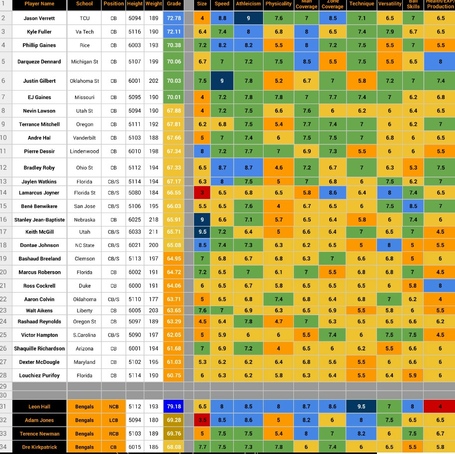 If Verrett was 2" taller, he'd be a top 10 lock. He has the athleticism, speed, intelligence, demeanor and plays with an intensity. Verrett is as physical of a CB you'll find at the collegiate level. Super-aggressive.

Best in zone because he can cover a lot of ground and reads route-combos quickly. Upside in man because he's physical at the line and has the athleticism to stick with anybody. Durability may be a concern.

Fuller is the most polished CB in the draft. Great technique. Versatile and experienced. Fuller often runs routes for the receivers. Has played every spot in the defensive backfield. You'll see him play his most physical vs Georgia tech when he played a safety role to help defend the option offense.

Feet and hips are smooth and accurate. Fuller was born to cover. Slight build and some nagging injuries can be a concern.

Size, speed, press, ball skills - Gaines has everything a true #1 CB needs. He isn't very physical and was rarely tested at Rice, but his flashes are as good as anybody. Measured incredibly well at the Combine and should see himself drafted in the 25-45 range.

Dennard may be the CB closest to his ceiling. He's the best man cover corner despite average speed, agility and acceleration. He wins with a physical play style and rerouting WRs. His hands/grabby style will make or break Dennard.

Played on the outside only and almost exclusively in man. Very active vs the run and blitzed well. Technically sound player.

Elite speed with good size and length. Gilbert's athleticism is wasted with bad footwork, late reactions and poor ball-locating skills. He refuses to get involved in the running game or fight through blocks. Played mostly zone.

When his back was to the ball, in man coverage, he was at his worst. Hands were good and when the ball is in his hands, he can score. Added value as a return man.

Smaller CB with above average athleticism. He'll attack and play very physically. Gaines is experienced in every situation and always looked cool and in control. Rarely looked in panic mode and the game comes easy to him.

He shut down Mike Evans and sealed the deal for me. He's a top 3 CB on most NFL team's depth chart. Instant contributor. Played both outside CB spots and nickel.

Nevin Lawson was the most tested CB in this draft. He matched up multiple times with Marquise Lee and Devante Adams in press-man situations and he came away with enough victories to impress me. Another smaller CB that doesn't back down. Solid athlete with good enough ball skills to play in man coverage.

Maybe the best press CB in draft. Technique is good. Agility and Acceleration make up for average speed. Very smart player. Quality experience in off man/zone and press. Quick to react to play in front of him. Very impressive film. Starter upside.

Another undersized CB that has the speed, athleticism, man/zone abilities and offers some kick return depth. Hal can be a team's #3 CB and see some solid playing time relatively early in career.

The best small school CB. Dessir has very good size to be a press corner with some athleticism to cover in man. At his best when he can press, reroute and drop into zone; where he's very aware and anticipated route combos and how offense's are attacking him. Good upside.

Good tape in 2012 when he could play more man coverage and use abundant natural talents. 2013 tape was poor; Was asked to play off-zone and Roby played without passion, urgency, decisiveness and often looked disinterested.

Both years, issued remained with tackling, attacking the run and locating the football in-flight. Boom or Bust prospect.

Size, Speed and Athleticism of an eventual starting CB. Played some Safety. Allergic to contact and should stay at Corner, but can be moved around. Could go as high as round two because of size, speed and school.

Nickel, Zone CB that's at his best when he can freelance and find the football. Limited athlete and small size will cause him to drop some on draft day.

The best ball skills in the draft. BB tracks it like a WR and attacks it at it's high point. The worst tackling CB in the draft. It became comical.

Has the size of a press-man CB but is a very raw prospect. Natural athleticism only gets him so far. SJB is a project that may never be more than a backup CB. For a bigger CB, his inability to attack the run was an issue.

A good press CB with rare length and nice speed to add. Has the ball skills and technique to play this role in the NFL. McGill is an older prospect with an injury history. One of the least interested CBs when it came to defeating blocks and tackling.

If I want a long, athletic CB to develop in this draft, it's Johnson. He's played all over the defensive backfield but is still relatively new to CB. Needs technique help and had trouble locating the ball.

Solid size, but average athlete. Breeland has some stiffness to him. Looked at best in Zone where he could face the football and battle a WR.

Let Roberson press all day and he looks like a top 60 pick. As soon as you ask him to play zone or off coverage, Roberson looks like a different player. I saw some of the best press-turn-run-locate-ball plays from him.

Highly competitive and physical. Has played safety, and it shows. Colvin hurt his knee in 2013. Should be a very good special teamer and versatile backup.

Good size and solid speed. Needs work on backpedal but improvement was shown at All-Star games. Could be a #3 CB one day. Physical player.

Size and speed will cause him to drop, but Reynolds Athleticism and Hips in man coverage will allow him to make a roster and stick. Needs to commit to bring more physical and a better tackler.