For much of the past decade, the Cincinnati Bengals have a been a respectable football team that's rarely has been non-competitive in games. That's in large part because of head coach Marvin Lewis.

He took this franchise from the NFL's cellar and helped make them a consistent playoff contender. That was hardly ever the case prior to his arrival in the Queen City. Will Brinson of CBS Sports did a point-differential analysis for every NFL team over the past 5, 10 and 15 years.

One of his takeaways from the study was how much Lewis has improved the Bengals since his arrival.

Marvin Lewis doesn't get much credit for his coaching because of issues involving challenges and his 0-fer playoff record. But look at the turnaround he engineered with the Bengals. They were the laughingstock of the NFL when he took over in 2003. Cincy's a consistent contender with a strong track record over the last five years now. 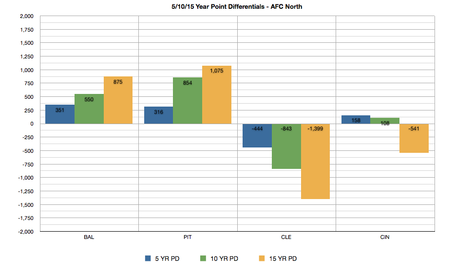 It's also not surprising to see the Bengals managed to outscore opponents by 108 points over the past decade, which covers the duration of Lewis' tenure in Cincinnati.

But by looking at the past 15 years and tacking on just the four seasons prior to Lewis' arrival, the Bengals were outscored by 541 points, a decrease of 649 points.

Only the Arizona Cardinals had a bigger drop-off at any point. It's just one of many reminders how much Lewis has changed the culture in Cincinnati and at least made this a respectable franchise.

Now, he just needs to take the next step and lead the Bengals to a deep-run in the playoffs.