NFL teams will begin their on-field preparations for the 2014 NFL season begin this week, starting today with the Baltimore Ravens, Buffalo Bills and San Francisco 49ers as their rookies report. Buffalo’s veterans will follow on Saturday, July 19, as the Bills become the first team to fully begin training camp.

By Sunday, July 27, every NFL team will be in camp.

More and more, teams are training at their regular-season headquarters. This year, more than half the league (18 of 32, 56 percent) will be staying home for training camp. In 2000, only five of 31 (16 percent) teams stayed close to home. The Minnesota Vikings are one of the teams that "come together" away from home (Minnesota State University, Mankato in Mankato, Minnesota).

New Orleans will conduct portions of their training camp away from the Saints’ training facility in Metairie, Louisiana for the first time since 2009. The Saints will hold training camp this year at The Greenbrier in White Sulphur Springs, West Virginia.

Following is the training camp list of sites and rookie and veteran reporting dates: 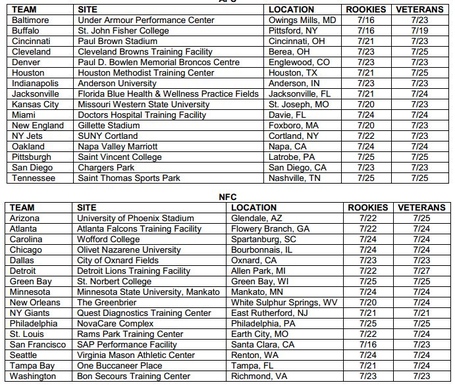