The Steelers and 49ers have each had a running back suffer a significant injury this weekend.

The Pittsburgh Steelers started 2-6 last year, but the emergence of Le’Veon Bell helped them rally to an 8-8 record, and hope for a resurgence this season. That probably won't happen if Bell is banged up like he was as a rookie, but he's already gotten injured in training camp.

He suffered some kind of hamstring injury during Sunday's practice, just the second one of Steelers camp. Head Mike Tomlin downplayed Bell’s injury, but did say further evaluations were needed.

"Tightness in the hamstring,’’ Mike Tomlin called it. "We’ll get that evaluated."

Bell suffered a bruised knee and a sprained foot during camp last year, causing him to miss most of the preseason and the first three games of the regular season. 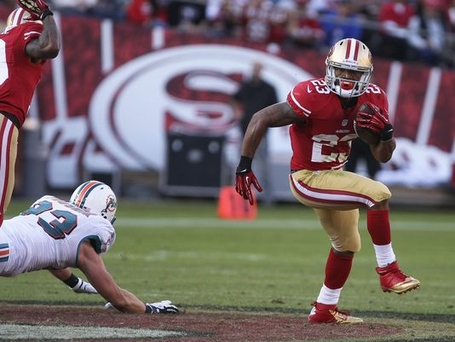 The San Francisco 49ers have already lost one running back for the year, and they'll be without another for the next month. After losing Kendall Hunter to a torn ACL, backup RB  LaMichael James got carted off the field with a dislocated left elbow early in Sunday’s practice.

It’s believed James got hurt in a pass-blocking drill. Coach Jim Harbaugh hovered over James on the ground before a trainer whisked him off to the locker room. James appeared to be supporting his left wrist with his right hand.

Injuries have struck James leading up to his two previous seasons. James sprained his left knee in last exhibition season’s finale at San Diego, and an ankle injury required him to get carted off the field in a 2012 exhibition at Houston.

James dislocated that same elbow tow years ago while playing at the University of Oregon, and it caused him to miss two games. Last season’s knee sprain caused James to miss the first three games of the regular season.  his most prominet role in the league to this point has been as the 49ers’ punt returner.

He had only 12 carries for 59 yards in the regular season, and one postseason carry for no gain in the NFC Championship game loss at Seattle.