Film Room: Can Victor Hampton shed his past for his Bengals future?

Hampton is a talented player, but he also has plenty of proving to do concerning his abilities and character.

Share All sharing options for: Film Room: Can Victor Hampton shed his past for his Bengals future?

Initial Thoughts: Hampton is a talented player, but after watching the tape I can see why teams passed on him. He had issues off the field and struggles to support the run. When the ball is in the air he is one of the best players that I have watched at competing for the ball.  He can let his attitude effect his play.  He was benched before a game and then was not active in run support for most of the game.

He will need to work on his run support and man coverage.  In the slot he will mostly be in on passing plays, where he excels.  With the additions of Dennard and Westbrooks this year I only give Hampton a 5% chance to make the 53 man this year. I think the Bengals will want him to prove he can stay out of trouble for a year and stash him on the Practice Squad.

I give him a 100 percent chance to make the PS as long as he stays out of trouble. If he doesn't clear waivers and a team scoops him up, it's not really a loss since he was a UDFA.  He could take Terence Newman or Adam Jones' role in 2015 if he is still with the Bengals.

Key Plays vs Arkansas: (note: lost his starting job before this game)

1) Dances around the running back on the play, allows his teammate to make the hit and tackle (0:24)
2) Reads the QBs eyes and breaks on the pass for the INT.  Has a decent runback on after the catch as well. (0:33)
3) Working out of the slot he flies up to make the tackle and whiffs. (1:35)
4) Fails to breakdown on the play and the RB shakes him with a stutter step.  He flails at the RB to make the tackle and falls on his back unsuccessfully. (2:00)
5) He is responsible for holding the backside edge.  The runner cuts back he breaks down and just throws his pads at him and doesn't wrap up (2:14)
6) He has a chance to stop a big play with an open field tackle, he dives at his feet and whiffs completely.  The runner gets an extra 25 yards.

Key Plays vs Mississippi State:
1) He does a great job of sitting in his zone coverage and breaking up the throw as it arrives.  As a result his teammate is able to make an INT. (0:39)
2) The smoke screen is thrown to the WR inside of him.  He sheds the blocker and comes up to make the tackle, unfortunately he misses the tackle. (1:13)
3) He waits for the WR to make is move and makes a big hit on him over the middle. (1:53)
4) He is the deep shell in the zone coverage; he is on the seam route but sees the throw and breaks on the ball.  His quick hips allow him to make up ground and he deflects the pass before it can get to the intended WR. (2:00)
5) There is a miscommunication on the play he thinks he has the flat 1/3 but he is supposed to be deeper.  He realizes the hole in the coverage and makes an acrobatic pass breakup.  After the play he talks to his teammate and realizes it is his mistake.  He takes ownership with the coaches for the error. (3:51)
6) He works against the WR on the fade route to the corner.  He keeps within arms reach of the WR and tips the ball away. (5:45)
7) He is guarding the blocking WR on the screen play.  He sheds the block then strips the WR of the ball as he makes the tackle.  It shows his great awareness and instinct to go for the knockout blow. 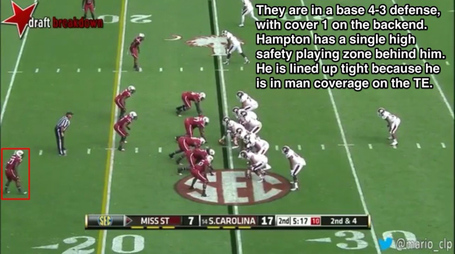 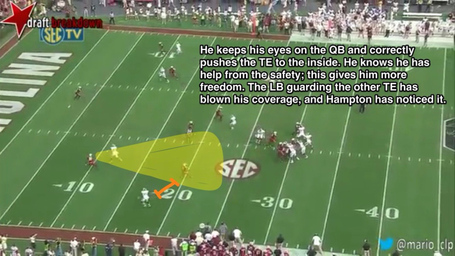 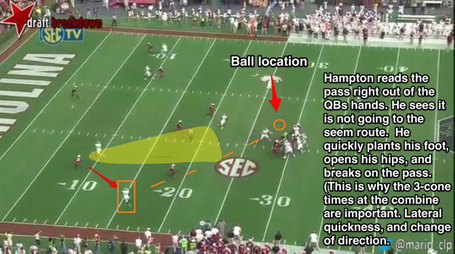 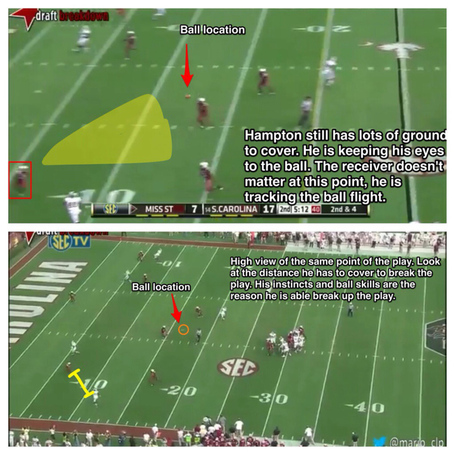 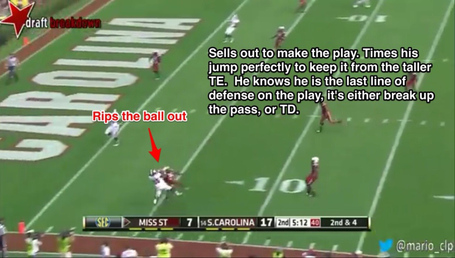 Final Thoughts:
If you just looked at the tape of Hampton, he would have been drafted.  It was his off the field antics that cost him hearing his name called.  Hampton got some bad advise from his agent.  He should have gone back to school for one more year.  That would have improved is stock in two ways.  He could have stayed out of trouble to build trust with teams, and added more quality game tape.

Regardless Hampton is in a good spot with the Bengals. He can get leadership from the likes of Newman, learn how to change his ways from Jones, and how he can dedicate to run support from Hall and Dennard. The problem with the Bengals is that they have five former 1st round picks in front of him.

If they only keep five CBs this year, which is very possibly, he has zero shot at the 53-man roster.  However, after 2015 one or more of those spots could open up.  If he is able to stay on the practice squad (PS) here, that might be the best thing for his NFL career.  He can practice and learn from some of the best at the position in the NFL.

My prediction: Hampton makes it to the final cutdown day and is offered a spot on the PS.  I'm not 100% convinced that he will clear waivers.  If he makes it to late September and has not gotten in trouble, a team with injuries at the position may claim him.