The 2014 FIFA World Cup continues in Brazil from now until July 13th. Countries from around the globe have gathered to determine which national team is greatest of them all.

After the first knockout round, we're now down to eight teams. Teams will battle in a do-or-die matchup from here on out. The quarter-finals will be contested by all eight winners from the group stages.

Here's the updated bracket of this year's World Cup: 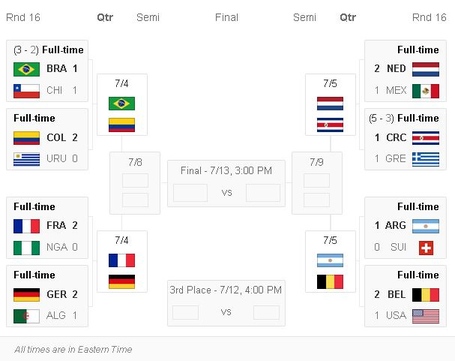 Germany, Argentina, Netherlands, Brazil and France all struggled against their so-called lesser opponents in the last 16, but they still made it through. Those five are the highest-favored to advance into the next round.

Here are the latest title odds going into the quarterfinals, which take place Friday and Saturday, according to Ladbrokes.