Marquis Flowers made sure his presence was felt in his training camp debut, and in the process, he may have made the LB position even harder to project.

When the Bengals drafted Marquis Flowers in the sixth round of the 2014 NFL Draft, most assumed the former Arizona linebacker was long-shot to make the 53-man roster. With the linebacker position being so deep, a year on the practice squad, or with another team, was the likelier scenario.

He made sure his presence was felt in his training camp debut Wednesday. He was all over the field making plays in coverage and the run game, highlighted by a decleater put on receiver Cobi Hamilton just 20 minutes into practice that had everyone in awe.

Starting to quickly see why #Bengals liked Marquis Flowers so much. He plays with a serious edge. Talks trash like Burfict. Backs it up, too

Flowers suffered a hamstring prior to the start of camp, causing him to miss the first five practices. He made sure to make up for lost time with his play on Day six. What was already likely the hardest position to project for the final 53-man roster now appears even harder to predict.

The early belief is the Bengals will keep five linebackers, along with safety Taylor Mays, who played nickle-backer last year and did well in that role. Flowers was actually drafted out of Arizona with a similar background to that of Mays. 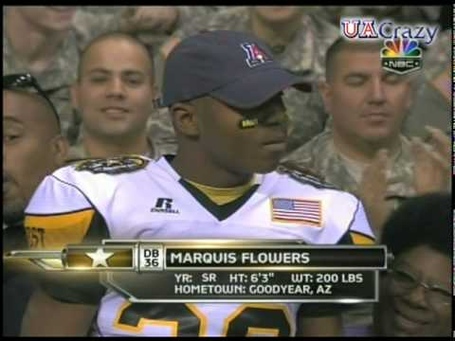 Flowers originally committed to Arizona as an elite defensive back prospect, and played exclusively at safety as a backup in 2011 before moving to LB full-time in '12. He's played and started there for the past two seasons at a high level, notching 193 tackles, 24 tackles for loss and 6.5 sacks over the past two seasons. He also had an interception returned for a touchdown.

Flowers hits like a backer and runs like a safety, having run the 40-yard dash in the 4.4 at his Pro Day and was even described as a "Kam Chancellor-type linebacker turned safety."

Depending on how the Bengals use him, Flowers could actually be used in a similar role to that of Mays, but it's hard to see both of those players making the final 53-man roster.