Who's more important to the Bengals: A.J. Green or Vontaze Burfict?

While losing either would be significant, I say Burfict is more important. Green is a top five receiver whose individual skill set cannot be replaced by any one player on the Bengals roster, however, one must consider the following:

1) Dalton is the leader of the offense, not Green

2) As great as Green is, there is a plethora of other weapons which together, could fill his void (Jones, Sanu, Bernard, Eifert, Gresham, Hill, Sanzenbacher, etc) through an adjustment in scheme.

Burfict on the other hand is also a top five player at his position whose individual skills cannot be replaced by any one player. However, unlike Green, Burfict is the leader of defense and unlike Green, Burfict's loss could not be minimized by an adjustment in scheme.

I am going to say Vontaze Burfict would be a bigger loss than A.J. Green. The talent the Bengals have on the offensive side of the ball could take a hit by losing Green more than the loss that would be felt if Burfict left. Burfict is the soul of this defense, the guy inspires other players around him. The Bengals don't have people on the roster that could play to that ability if Burfict were gone. 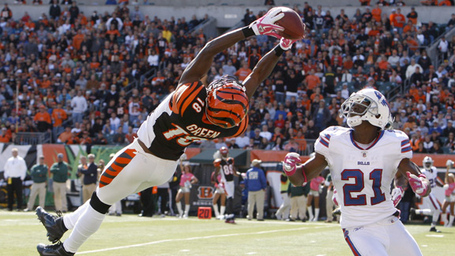 A.J. Green is the more important player. It's a passing league and the Bengals have one of the best pass catchers in the league. Green demands attention all game long and is the best player on an inconsistent offense. The defense wouldn't be as good without Burfict, but could you imagine the offense without Green?

Though I absolutely love what Vontaze Burfict means to this team and part of me actually thinks he might be a better player, A.J. Green is more important at this point. Both guys' units are loaded with talent, but the defense was already good before Burfict got here and the team's true turnaround began with Green and Dalton.

I am going to have to go with Tez being more important, before you go "the defense was already good, yadda yadda yadda," hear me out.  It all comes down to two things for me, leadership and swagger.  A.J. is a great player and the offense would no doubt be worse off without him, but he is not the vocal leader, or the backbone of the offense.

When he missed a game his rookie season with the knee injury the team still was able to put up 24 points against Baltimore. When Tez hurt his ankle last year you noticed how much the other defenders were worried about him possibly missing the game. He is the heart and soul of that defense and he brings everyone around him to another level.

That is why he is more important, although lets be honest they are both elite players.