There have been reports Manziel has already passed Hoyer on the depth chart, but Pettine says that's not the case.

The Cleveland Browns announced on Tuesday they signed unrestricted free agent QB Rex Grossman. General Manager, Ray Farmer made the announcement, as well as news that the team had waived QB Tyler Thigpen.

Grossman spent the past four seasons (2010-13) with the Redskins following one year with the Texans (2009). Last season, he was inactive for 13 games and was active but did not play in the team’s final three contests. 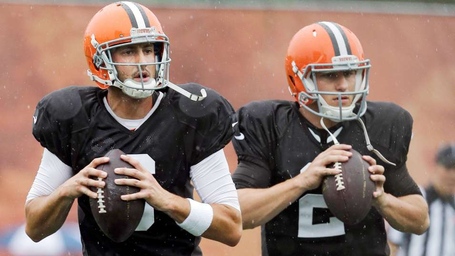 As for the starting QB race, Brian Hoyer and Johnny Manziel continue to duke it out. In Saturday's preseason opener, a 13-12 loss to the Detroit Lions, Hoyer completed six of 14 passes for 92 yards. Manziel was seven of 11 for 63 yards, but flashed the ability to use his legs by rushing for 27 yards on six carries. Neither quarterback was able to get his team into the end zone.

The Washington Redskins will host the Browns at home in their next preseason game.  It will be on Monday night, August 18th on ESPN, and it could be Manziel getting the start while Hoyer sits out. The Browns signing Grossman indicates that could be the case. There have been reports Manziel has already passed Hoyer on the depth chart, but Pettine has said that's not the case.

Hoyer and Manziel will each get first-team repetitions in practice this week, as Pettine ideally wants to name his starter before Cleveland's third preseason game Aug. 23 against the St. Louis Rams.