Gio Bernard and Jeremy Hill were the first and second running backs taken in their drafts respectively. Clearly, the Bengals expect these two players to be a thunder and lightning duo in Cincinnati for a long time.

To project exactly how they'll split snaps, first, we need to take a look at the running backs' numbers from last year.

Although Bernard had about 150 more snaps than Green-Ellis, he had 50 fewer carries. It's quite clear from this chart that Gio Bernard was the 'passing down' back in Jay Gruden's offense. Green-Ellis only caught the ball four times, while Gio caught three touchdowns.

Additionally, I've provided a graph of the 2013 running back snap percentage, which fluctuated greatly throughout the year. 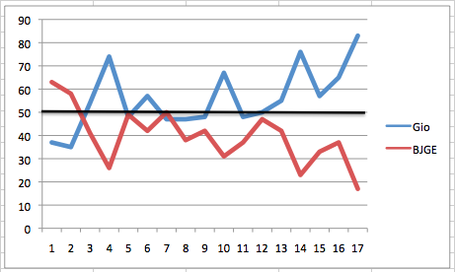 First, notice that Bernard got less than 40% of the total snaps in the first two weeks of the year. This was because Bernard struggled with pass protection in the preseason, and they wanted to ease the rookie into the lineup.

Outside of these six outlier games, Gio Bernard averaged about 52% of the teams snaps at running back.

So, overall, it was close to a 50-50 split between Green-Ellis and Bernard. Green-Ellis was used more in short yardage situations, at the goal line, and at the end of the game (when the defense knew the offense was running it).

The big question is, will Jeremy Hill take over all of these roles? Before we answer that, we need to look at what the team plans to do with the starter Gio Bernard.

Gio Bernard will be featured heavily in the offense this year, as opposed to being a second thought when the ball was handed off last year. The Bengals, according to running backs coach Kyle Caskey, plan on "expanding his portfolio of plays... to get the ball in Gio's hands in space". I found the following quote to be very interesting:

Last year, Bernard caught 56 passes from 69 targets. No one is taking the passing down role from him. I anticipate him catching at least 70-80 balls this year, if not more. Bernard has motioned out wide during training camp practices quite a bit. While throwing to the running back was more of an afterthought in Jay Gruden's offense, I think Hue Jackson will ensure that throws to Bernard are in Dalton's first few reads.

Now, let's look at what Bengals.com's Geoff Hobson said last month about the split between Bernard and Hill:

Jackson isn’t going to advertise it, but you could almost see it close to an even split. Giovani Bernard is the starter, so add about 60 more carries to his 170 from last season. That gives him 230 for the year, about 14 carries a game, and I’m not sure they want to run him even that much. At 5-9, 205 pounds, they want to protect him as well as use him in the passing game.

Hobson gives an important number here - 230 carries for Gio Bernard. Since Bernard will get more first down carries carries and almost all of passing down reps, I think that's a fair number. Hobson also mentions that the Bengals want to protect Bernard from injury. He did have a bit of an injury history at UNC, which is why having a second running back to spell his carries is so important.

So, if the Bengals carried the ball 400 times last year, how many times will they run it in 2014? Since they intend to run the ball more and have an uptempo offense, Geoff Hobson says 460 carries. He thinks the remaining 230 carries will go to Hill and the other backs.

At this point in time, we still don't know if Green-Ellis will make the team or not. It would be very Bengals-esque to keep Green-Ellis and let him play out the last year of his contract. On the other hand, both Rex Burkhead and Cedric Peerman also deserve to make this team. They have more value in the passing game, on special teams, and maybe even as pure runners when compared to Green-Ellis. It makes a lot more sense to release Green-Ellis and use the cap space to help re-sign A.J. Green and Vontaze Burfict.

Regardless, if Green-Ellis makes the team, his carries will only eat into Hill's carries, not Bernard's.

If Green-Ellis doesn't make the team, Hill is a good bet to get around 175-225 carries because this team really wants to run the ball. I think he starts the season slowly, because he's still had some issues in pass protection (as Bernard did last year). By the the middle of the year, he'll have taken Green-Ellis' 2013 role completely: short yardage, goal line, and end-of-game usage.

Lastly, there's the issue of goal line work. Bernard was used on outside runs at the goal line last year and had some between the tackles runs there as well. Hill will take a few touchdowns here, but Bernard won't be completely absent at the goal line. Yesterday, the Enquirer's Paul Dehner Jr. had this to say about Gio Bernard's usage:

I think he gets 300 touches by the end of the year and takes a good share of goal line carries.

To me, Bernard will be one of the most productive backs in the league. Not many running backs in the league are flirting with 300 touches. I think he finishes with 220 carries, 950 yards, 75 catches, 650 receiving yards, and 10 total touchdowns. In fantasy terms, Bernard would have finished 6th in standard scoring and 4th in point-per-reception (PPR) leagues among running backs last year.