Here in Cincinnati we probably talk too much about our signal caller. All he does is get the Bengals into the post season. The Jets on the other hand have a long history of below average quarterbacks that almost rivals the Browns.

Geno Smith is a new name in the long line of Jets signal calling saviors. After finishing last season outside of the top 32 in quarterback rating and QBR, Jets fans hope to see more from the young quarterback this season. These may be high hopes for a guy who is surrounded by a porous line and a plethora of number 2 wide receivers.

Before him was the "Sanchize" or his proper name, Mark Sanchez. After 4 disappointing seasons for the Jets, the franchise finally decided to move on and give him his walking papers. To emphasize how bad Sanchez was for the Jets you have to look no further than his defense.

During his tenure in New Jersey, the Jets boasted one of the top defensive units in the league. They even had the rarely visited Revis Island vacation spot along with top caliber players in every position group. Yet Sanchez never finished with higher than a 78 QB rating and one season was as low as 63. Add his 69 interceptions and 43 fumbles and it is no wonder why he is more famous for the "Butt Fumble" than he is for his 2 AFC championship appearances.

Before Sanchez was a pit stop to the retirement train for little known quarterback Brett Favre. Probably more of a way to hide from Jenn Sterger than to lead a team, Favre actually started the season pretty well before he realized how old he was and his arm gave out. The Jets started the season 8-3 and looked to be a legitimate contender. Then they dropped 4 of their last 5 and the last ride of Favre was over.

Chad Pennington spent 6 seasons as the Jets field leader. After taking over because of an injury, Pennington shot out of the gate with impressive play that culminated with a 41-0 crushing of the Colts in the AFC Wild Card game. However, in the following seasons, it seemed Pennington was always dealing with some kind of injury. He was never known for a very strong arm, but his accuracy and decision making was strong. As he battled injury though, these parts of his game deteriorated and he was replaced by Favre.

Pennington was at least a Jets draft selection, before him the Jets employed a philosophy of grabbing journeymen from other NFL teams. This included quarterbacks like Vinny Testaverde, Ray Lucas, Neil O'Donnell, Frank Reich, Boomer Esiason and Bubby Brister.

I could detail all of these journeymen, but really, outside of Testaverde, none of them were much to write home about for the Jets.

Boomer Esiason, the former Bengal, never looked right in the ugly green of the Jets uniform. At 32 years old Boomer was on the backside of a career he built in Cincinnati. As he aged, so it seemed did the Jets as a whole. In his best season he finished 8-8 then followed with records of 6-10 and 3-13. 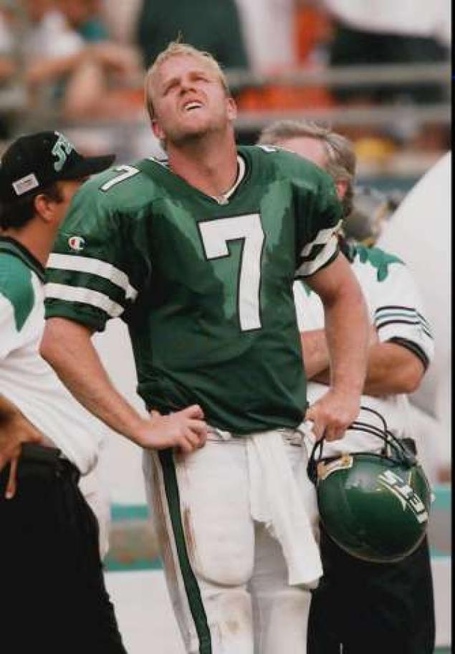 With the long history of poor quarterbacks for the Jets, I feel a little sorry that they still seem to be in the tunnel looking for the light. Sure, they may convince themselves there is improvement a season at a time, but like the Bengals of the 90's, it does not look good.