Film Room: Will Clarke's outing vs the Chiefs

Most pundits and fans believe that Clarke was drafted in the third round to replace some of Michael Johnson's production.

Share All sharing options for: Film Room: Will Clarke's outing vs the Chiefs

Most pundits and fans believe that Will Clarke was drafted in the third round to replace, in the long term, some of Michael Johnson's production. Nobody thought he was going to be ready yet, but we wanted to take a long look at his first minutes of NFL action as the defensive line is one of the few units the team could be worried about.

The period started with the Bengals scoring in the very first play, after reaching the red zone back in the third quarter. With Cincy trailing by 3 (34-31) they needed to stop Kansas' first drive to set up a comeback.

What came next was simply the very opposite, with the Chiefs adding 25 yards on the ground and getting to midfield. 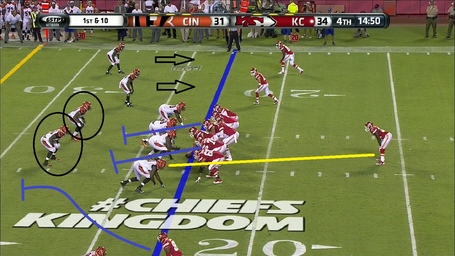 Both guards are going to get to the second level, taking away the linebackers (Bengals are on nickle formation). Clarke tries to push his way in to the outside, only to find the running back is coming through the left guard. He notices this and reacts quickly, and is very close to tackle him. 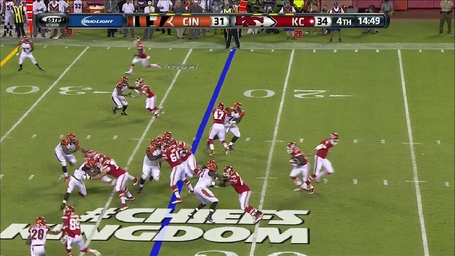 The Chiefs player avoids the defensive end shifting to the right side of the line, where there is a huge hole (this is what a good blocking in the second level is good for). Stanford's man also sets up the block further on the left side, keeping one safety out of reach. Both the right tackle and center do a great job checking the defensive tackles and leaving the lane open to their right, where the running back will cut in. 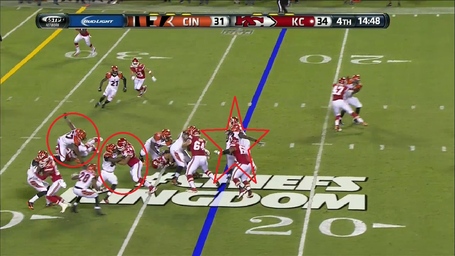 Dennard, who is left free by the opposing wide receiver (who tries to block Danieal Manning instead) misses the tackle, and also removes Clarke from the play, leaving a wide open lane for the running back. 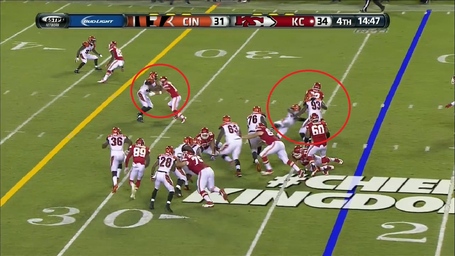 The two rookies scored negative grades against the run for ProFootballFocus, and overall, Clarke got a -1.1 in his 22 snaps on the field on Thursday.

Next caption is going to show again that quickness to react. Clarke is unblocked and his first thought will be play action, and will try to get to the quarterback. 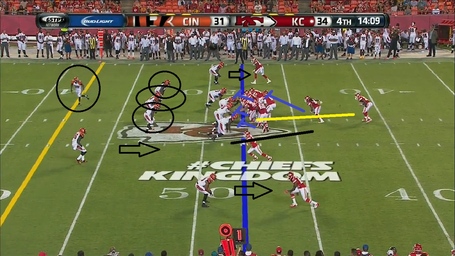 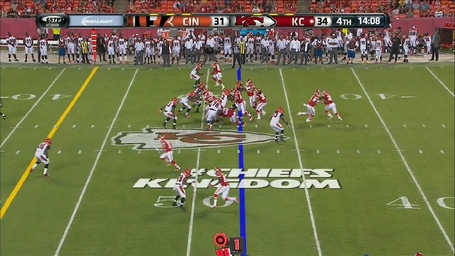 The running back, is going to cut from left to right, to go up the middle with the linebackers entertained with the offensive line. Marquis Flowers is not at his best here, being alone he is drawn to the maul instead of being more patient and letting the play develop thus leaving the lane open on his right side. 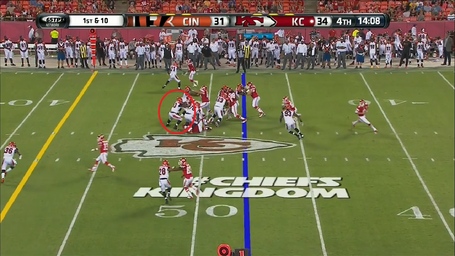 Clarke will be fast enough to make it up for failure not to recognize the play in the very first moment, and will catch up with the speedy back tackling him and keeping the loss of yards at 4. 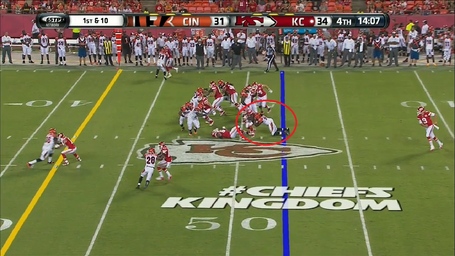 Next action is going to be disappointing though. Clarke is going to face up the Chiefs tight end (the same one that got a big recepction in the third quarter when Moch and Hunt failed to make the sack) and Harris, 41 pounds lighter and a little bit taller than him is going to keep him away from the play. It is 3rd & 1 and a great effort by Vinnie Rey is going to take the Chiefs to 4th down. 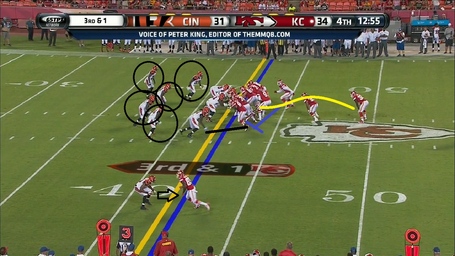 Leverage by the tight end is way better and he will stand his ground nicely against Clarke. 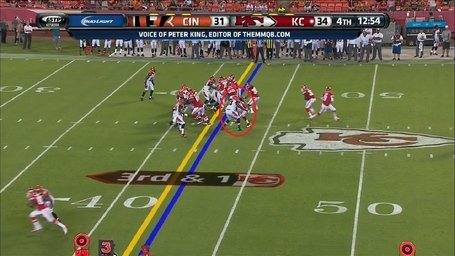 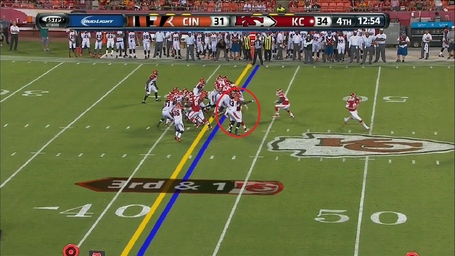 Nevertheless the Chiefs will convert and keep running all over the Bengals defense. On the next caption, Kansas City will start from CIN25, and, again, will get a big play, gaining 14 yards. This one is another poor effort from Clarke, but given the way he just gave up we can consider he was kind of tired after being on the field for so long chasing backs.

The tight end and the left side of the offensive line as well are just going to let Clarke and #76 David King pass by and will set up their blocks in the second level, although the left guard will find quickly no job for him. The right guard is going to come over and is going to take both Bengals defenders away with ease. Dennard will blitz from the left side but will have no chance to reach the play. 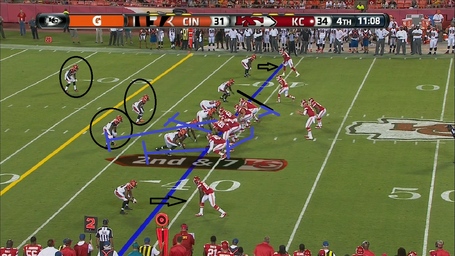 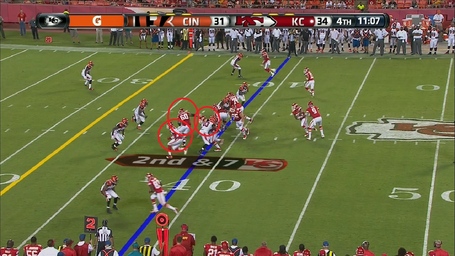 Both Clarke and King have a great chance to step into the lane but fail to avoid the right guard who effortlessly will push King out. Clarke will just keep himself away from the play because he didn't even manage to go around the Chiefs lineman fast enough to try to get to the back or push him to collapse the hole. 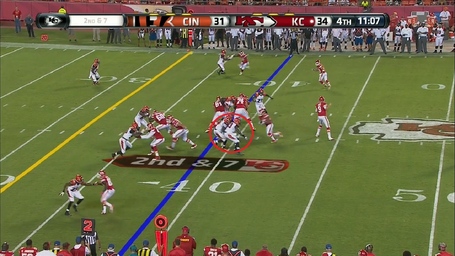 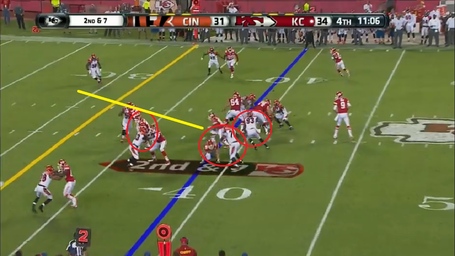 The back could have easily gone the distance because he still had his left guard running alone before him, but he decides to take the middle of the field where Shawn Williams is going to come in make the play.

Next we will see Clarke trying to make up for it running hard to the quarterback on the outside move, failing to make any impression and letting his left side wide open while his man only needs to push him to blow him completely out of the play. 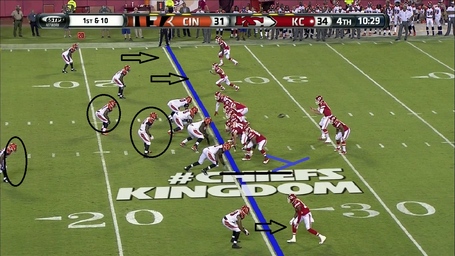 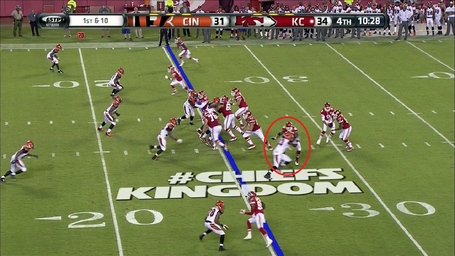 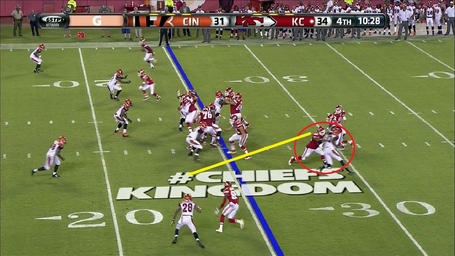 His man is free now and can block RJ Stanford on the right side while the Chiefs wide receiver can take Danieal Manning. Only a nice play from Marquis Flowers, getting away from his blocker makes the running back change direction as he closes the gap and the lane is not open anymore.

Had Clarke stayed on the play the left tackle could not have checked Stanford and the finish to the sequence could have been a tackle for a loss instead of a gain of 1 yard. 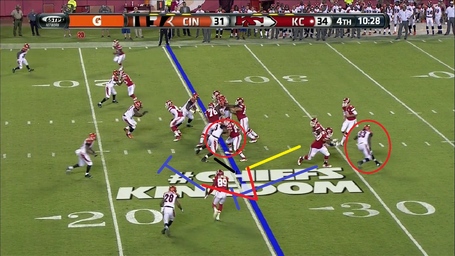 With Kansas City at CIN24 Clarke is again going to the outside after, again, being left unblocked. 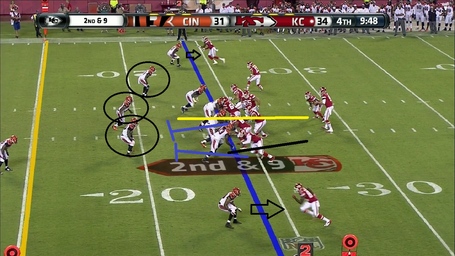 This will leave two linemen available for the double team against the defensive tackle, opening up the hole in the middle of the line of scrimmage. 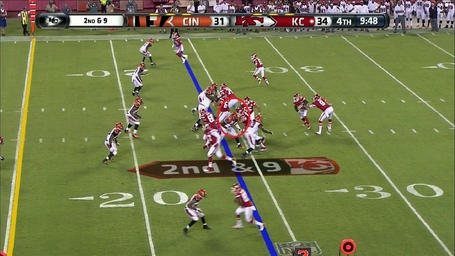 On the good side, he reacts quickly again and is gets very close to the running back even strechting his arms to try to make the tackle. 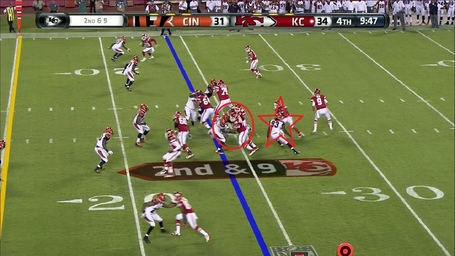 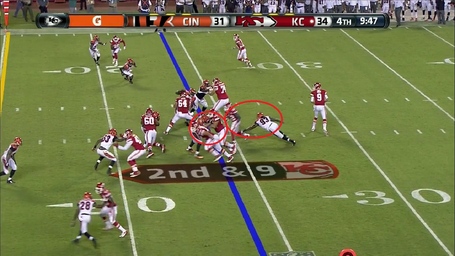 Last play we will break down will be the touchdown scored by the Chiefs at the end of this drive that took away half of the quarter off the clock, leaving not too much for the Bengals to stage a comeback. 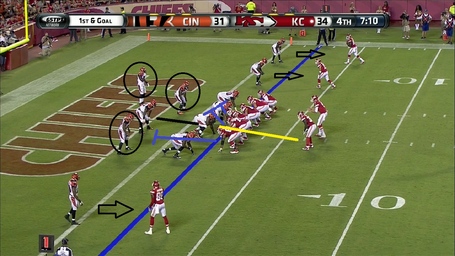 Marquis Flowers (playing MIKE) is going to blitz, but the left guard and center will push him and the defensive tackle to the right, opening up the lane in the middle for the running back. Clarke's man's job is in the second level, and Clarke fails again to recognize the play, trying to go outside even though there is nobody blocking him. 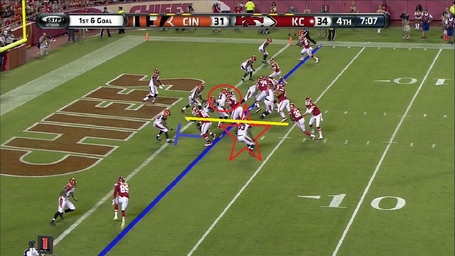 Nice job by Flowers to break free from the block to step into the lane and tackling the back, giving also time for Clarke to reach the play, although the Chiefs will eventually score on them. 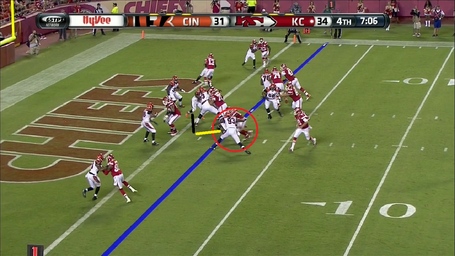 Clarke has a lot to learn, but his athleticism could prove great in the long term. Hopefully the Bengals won't need him to contribute right away.