Do Bengals fans have no faith in this team? Chad Johnson claims to have talked with the Bengals coaches. NFL.com is having some headline problems and Andy Dalton could have saved Bill Polian's job. 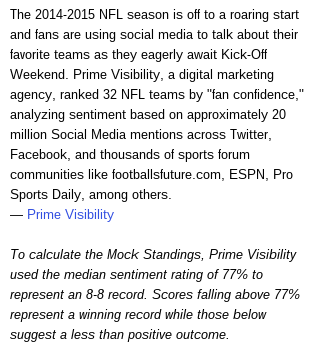 The Prime Visibility ranking said that 78 percent of Bengals fans are confident, which means they think at best Cincinnati will have a .500 record this season. That puts them in the middle of the pack at number 15 overall. Sounds a little low to me, but at this point it seems like nothing but a playoff win will satisfy.

It's hard to disagree with that last line.

NFL.com Says Seahawks "Giving the Dick" To Chargers | Robert Littal Presents BlackSportsOnline
I am trying to figure out what the intern was trying to say with the headline and I am coming up with a blank. Maybe, they were hacked? Maybe the intern was mad he got passed over for job and decided to plot his revenge like this?

NFL Trade Rumors - Bill Polian Believes He Would Still Be With The Colts If He Drafted QB Andy Dalton - NFL Trade Rumors
According to Judy Battista of NFL.com, former Colts GM Bill Polian told Bengals HC Marvin Lewis that he would not be working for ESPN had he drafted QB Andy Dalton in 2011. The comments are interesting, as Dalton has proved to be one of the most polarizing quarterbacks in the league.  He just signed a six-year deal worth up to $115 million, but he has his share of critics primarily due to his postseason struggles.

Cincinnati Bengals waive OL Chandler Burden, now down to 85 - ESPN
The Cincinnati Bengals waived offensive lineman Chandler Burden on Sunday, bringing their roster total from 86 down to 85. A Cincinnati native, Burden played at Kentucky before spending time on the Miami and Kansas City practice squads as a rookie last season. The Bengals signed Burden as a free agent on June 3 and played him in both of this season's preseason games.

Andy Dalton was perfect last night, going 8 of 8 for 144 yards and a touchdown.  Dalton has really stepped it up after receiving his new lofty contract, and is looking to finally get past his playoff mishaps.  Although Dalton cracked the top five quarterback rankings last season, I still see Dalton as a high end QB2 option.

Andy Dalton's first throw was right there. So were his next seven. Even his longest pass came down in the exact spot he intended. Perfect, all around. Dalton completed all eight of his passes and led the Bengals to a pair of touchdowns and a field goal during three impressive series Saturday night before the New York Jets' reserves rallied for a 25-17 preseason victory.