Bengals who impressed Vs. the Cardinals

Mohamed Sanu, Jeremy Hill and Geno Atkins deserve to be called out as players who I thought played well last night.

Share All sharing options for: Bengals who impressed Vs. the Cardinals

In the Bengals' closest dress rehearsal to the actual show, there was some solid play and some questionable play. Sure, the Bengals won, but we have already established that the outcome of preseason games does not really matter. We, as fans, want to see the starters play well and the backups play better. Really, we just don't want anyone to get hurt.

I did want to call out three players who did well last night:

Mohamed Sanu
As the Bengals look to find their number two receiver this season, Mohamed Sanu continues to raise his hand and waive it wildly in the air. Last night, Sanu contributed with five catches for 70 yds. Great numbers for a player that only played a partial game. Sanu looks to be playing at the level many Bengals fans wanted to see when he was drafted: a big tough target who can play at any of the receiver spots and make catches. Last night, he did that well.

I made a mental note last night that I wanted to call out Jeremy Hill. Wondering what kind of productions he would show after having an shoulder issue recently, I was excited to see him running hard. It seemed the Cardinals defense was out to stop Giovani Bernard, and Hill came in and pounded for a total of 48 yds rushing. Add in his two catches for 10 yds and it was a good look for the rookie in limited action.

Geno Atkins
It wasn't so much what Geno Atkins did on the field, as much as it was just good that he was there. For a couple plays the old Atkins showed up to collapse the backfield and force Carson Palmer to throw the ball early. It was very encouraging to see the Bengals dominant defender back on the field and creating some chaos when needed. It makes the defense look much stronger to start the season.

And then there was the awesome hit from Dre Kirkpatrick. That was one I watched more than a few times. 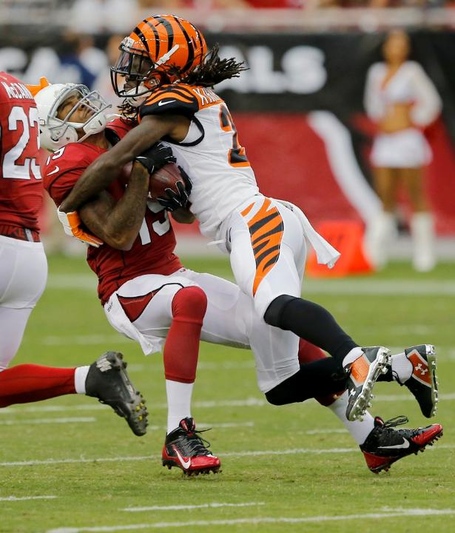