Someone takes a stab at the real Madden rankings. A "Best of the AFC north" list leaves out one of the best players in the division.

2014 NFL Preview: Best of the AFC North | isportsweb
Last season, the AFC North was far from one of the dominant divisions in the NFL. Only one of the four teams, the Cincinnati Bengals, made the playoffs and even they made a quick exit in the post-season.

HONEST Madden 15 Player Ratings - SportsPickle | SportsPickle
A look at what the Madden rankings should be for many NFL players. 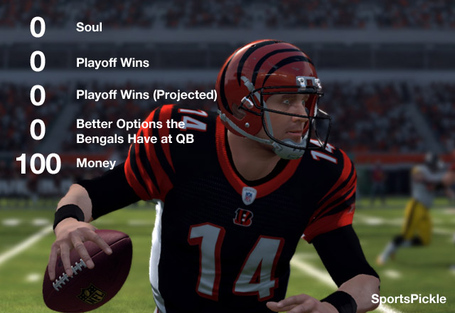 Rams may not be able to slide Sam to practice squad | ProFootballTalk
The St. Louis Rams soon have a decision to make regarding seventh-round rookie defensive end Michael Sam.  In a Tuesday appearance on PFT Live, Jim Thomas of the St. Louis Post-Dispatch explained that Sam could still have a difficult time making the team, despite a couple of sacks in the preseason.

Few of the Cincinnati Bengals' cuts were very surprising, but quarterback Matt Scott's release might have been the most significant because he had been viewed as the No. 3 quarterback on the roster behind Andy Dalton and Jason Campbell.

The Cincinnati Bengals took the first step toward trimming their roster to 75 by today’s 4 p.m. deadline by terminating the contract of R.J. Stanford while waiving four other players Monday. The Stanford move releases the cornerback to free agency immediately, while wide receiver Ryan Whalen, defensive tackle Larry Black, kicker Quinn Sharp and safety Isaiah Lewis are all subject to waivers.

Gordon delay could make it easier to get an injunction | ProFootballTalk

It's not known whether Browns receiver Josh Gordon will go the StarCaps route if/when he's officially suspended for a year, filing a lawsuit attacking the arbitration decision and seeking a preliminary injunction that would allow him to play until the litigation ends.

Why Your Team Sucks 2014: Cleveland Browns