After two weeks of facing mediocre secondaries the Bengals were up against one of the elite defenses in the NFL and the results were mixed. this was also Dalton's longest outing this preseason.

After two weeks of facing mediocre secondaries, the Bengals were up against one of the elite defenses in the NFL in Arizona. The results were mixed for Andy Dalton.

Overall, he was inconsistent, but got little help from the running game and was frequently in terrible field position

The first play we'll take a look at is 3rd & 6 on the first drive at CIN-13. The Cardinals are on Cover 1 off a dime formation (6 DBs), with only one safety deep and another one taking the middle of the field. The Bengals started out with Tate on A.J. Green's opposite side, choosing to keep Sanu in the slot. With Eifert sidelined, Gresham shared the inside. 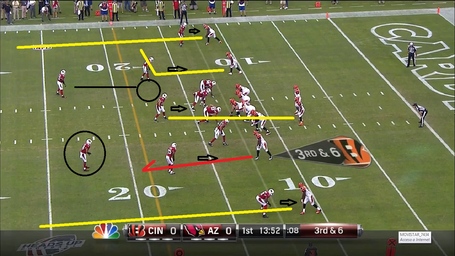 Protection is not bad, although Bodine will mess it up going right to help Zeitler. Dalton has time to throw. His first read is going to be right, but Patrick Peterson is all over the place and Sanu breaks free from his man on the hitch route. 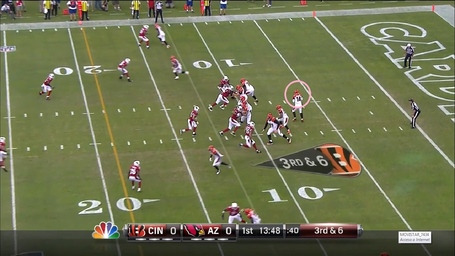 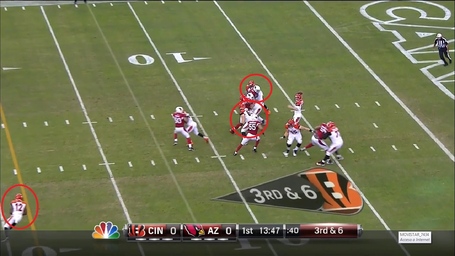 With a four men pass rush, the Cardinals are able to get a good look at the quarterback, but he has his target open well enough for a first down before failing to connect, and throwing a high ball on his back foot. Even though the pocket was collapsing (Boling and Bodine were bad here) and the opponent was close to get his hands on Dalton's face, he has to make the play.

On Cincy's next drive, the visitors will find themselves again on third down, but are going to beat the Cover 1 with a simple fake handoff that both the inside linebackers and the safety will buy. 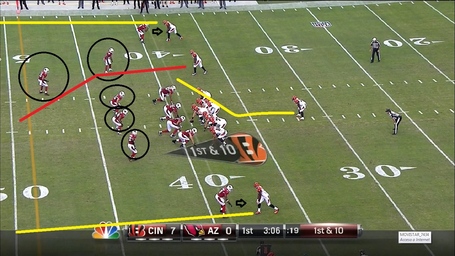 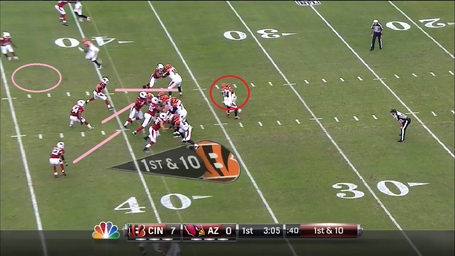 That is going to leave Sanu again open in the middle of the field. Protection is great, and this time Dalton makes the perfect pass off his front foot. 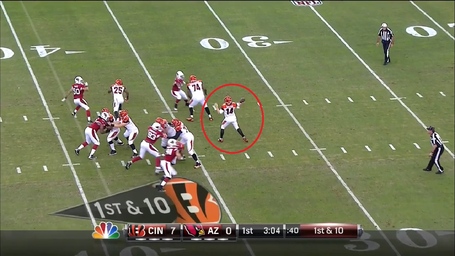 A couple of plays later, Andy is going to fail to go through his reads, throwing the ball straight to the strong side of Arizona's defense, and the bad pass was almost picked. 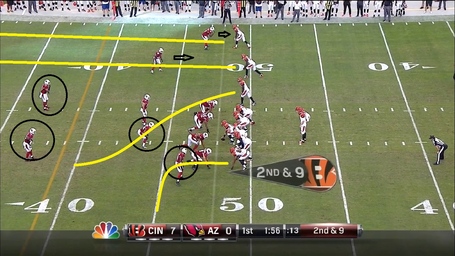 Both Sanu and Gresham win on the inside against the zone and are open on the left side, but Dalton is always looking right and he is going to force the pass against the deep safety and Patrick Peterson. Ball is thrown high and way past Green, and Cincy cannot take advantage of its two slot receivers. 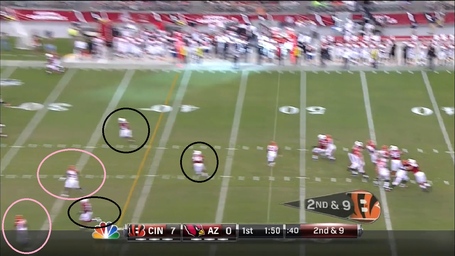 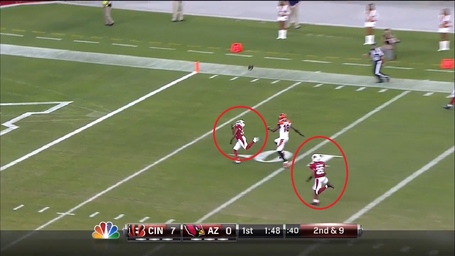 Now Cincinnati is again on 3rd & 9 at ARI-48 and they will have a great look at getting the first down. Green is in the slot and his man is in zone on the left field. He is going to run an in-route underneath the linebackers (though the Cardinals are in a dime formation one more time).

Dalton will not see Green open, showing again a flaw at progressing through his reads. He is looking right as we'll see in the next caption. 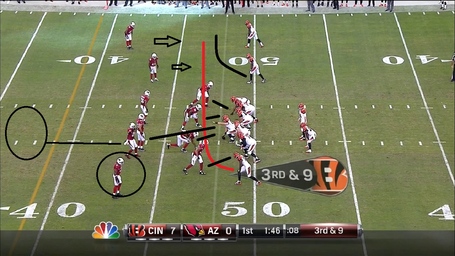 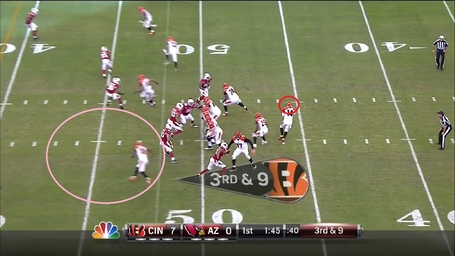 Finally, when Andy does see him, he has to avoid one rusher to make the pass, but Green is looking down after waiting for too long and Dalton cannot connect with him, throwing over his shoulder. 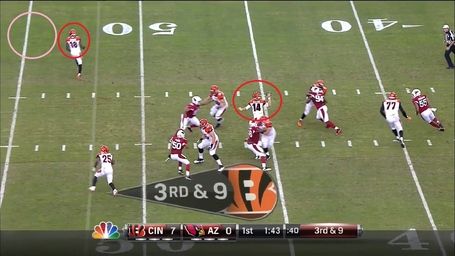 In the second quarter after an intentional grounding call on Dalton, Cincy is again in trouble, on 3rd & 18 at CIN-9. Andy is looking right at what could seem to be a wide receiver screen for Sanu with Gresham and Green lead blocking. 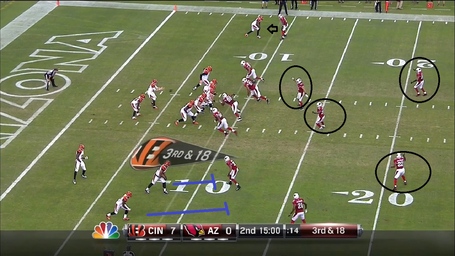 But he pumps fake and waits for Bernard to break free from blocking to throw the pass for the screen on the other side. 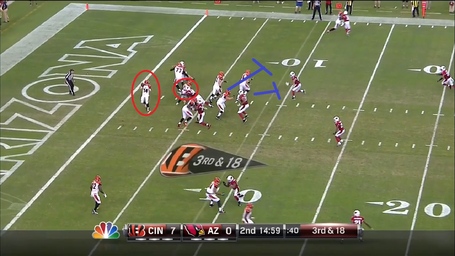 I don't know why he changed up his mind of if that was the original play call but the pass is bad (as you can see in the next snapshot) and blocking on the second level from Bodine worse. Gio is going to find himself with nowhere to go, losing 3 yards along. 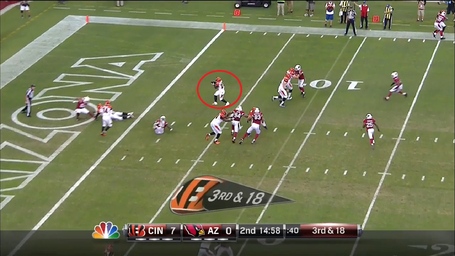 This screen pass is bad. It seems like Andy is looking left first, but Green and Sanu are unable to get any separation. Tate cuts in underneath and is wide open. Dalton pumps fake the pass but Ed Stinson (#72) holds Jeremy Hill to keep him away from getting open. 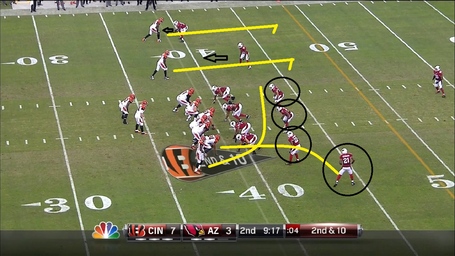 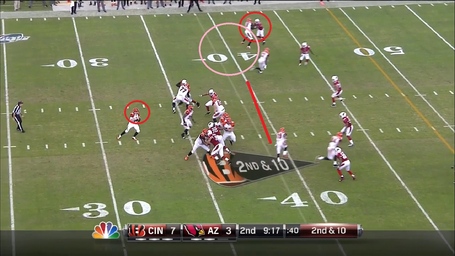 The quarterback misses the play and instead of hitting the man open force the pass there and throwing it low. 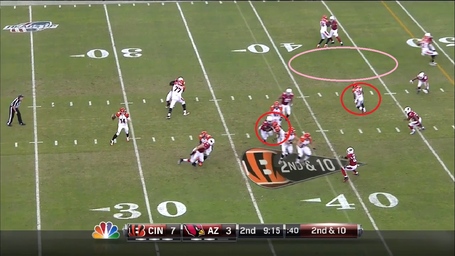 Despite those poor efforts we also saw some good throws, like this one against a 7-man blitz to Sanu on a slant route. He released the ball nicely as he is hit. 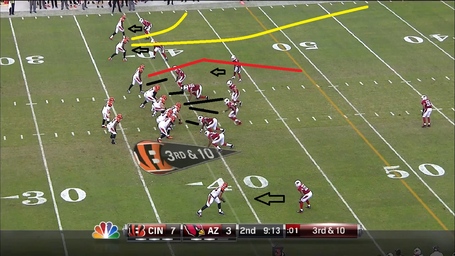 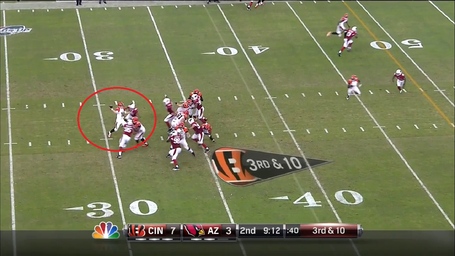 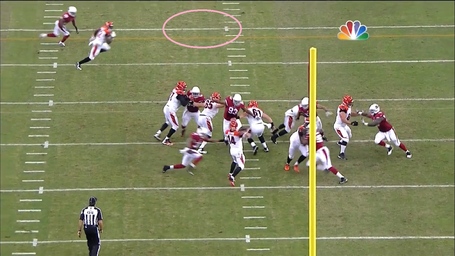 He would also lead a nice drive to score again before halftime, kicking it off with this good pass to Green on a slant route. 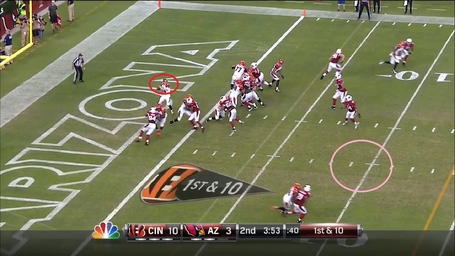 While he could not get the touchdown, Dalton looked more comfortable throwing to the middle of the field, something Jay Gruden used less in his time in Cincy.

Overall, Dalton was again inconsistent, but Cardinals' defense is one of the best in the business despite losing some key players to injuries or free agency.