Wilder has the look and the NFL bloodline with his dad being a former Pro Bowl running back with the Bucs.

Initial Thoughts: Wilder definitely has the talent to be on an NFL roster as the short-yardage guy.  The problem is for him the Bengals have a vet in BenJarvus Green-Ellis they can keep in that roll with added character and leadership

Wilder has the look and the NFL bloodline with his dad being a former Pro Bowl running back with the Bucs.  I see him as an insurance policy in case they lose BGJE, Hill or both in training camp or the pre-season.  He will get his fair share of touches in the preseason though. Wilder has got a great chance to at least make the practice squad.

One day while I was working on the article and tweeting out my notes, @IAm_Wilder32 tweeted me back to let me know the practice squad wasn't an option:

@codiki PS is no option the grind that's been put in will be noticed sooner than later!!!

Even if they let BJGE go they could still go with Burkhead and Peerman. I think the Bengals would like to see if Wilder can keep his nose out of trouble while learning the offense in 2014.  If the Bengals consider that the third string back might only get 40 carries all season, why pay him $2.5 million.

This is also a move to ensure talent for the future, BJGE is for sure gone in 2015.  If you can get the same or more production for $2.25 million less, why not?

If he is in a virtual tie with Burkhead at the end of camp, I think Wilder will get the nod.  Consider their thought process, if you have already given Burkhead a year head start and Wilder has caught up in a few months....you would pick WIlder.

Key plays vs Miami:
1) He sees an opening in the B gap early on and disregards his lead blockers to the A and C gaps.  He solo shoots the gap, but the hole quickly closes in front of him.  He has to work harder with no blocker to eat up the LB approaching.  He lowers his pads, absorbs the contact, keeps his balance, and keeps his feet churning for the TD. (0:18)
2) He makes a good read of the play, and correctly follows his blocker through a huge opening.  Unfortunately, he gets his foot tripped up by the LT and falls for a short gain.  (0:52)
3) He makes a great sweep run and uses a stiff arm to stop the would be tackler.  He keeps his feet and dives for the pylon to get the TD. (1:15)
4) Winston fumbles the snap and Wilder alertly notices a botched play.  He turns around and runs back over to place a block for Winston and buy him some time.  (2:08) 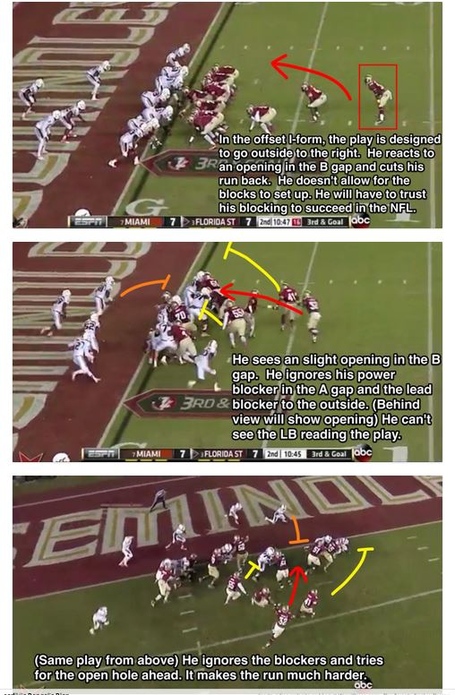 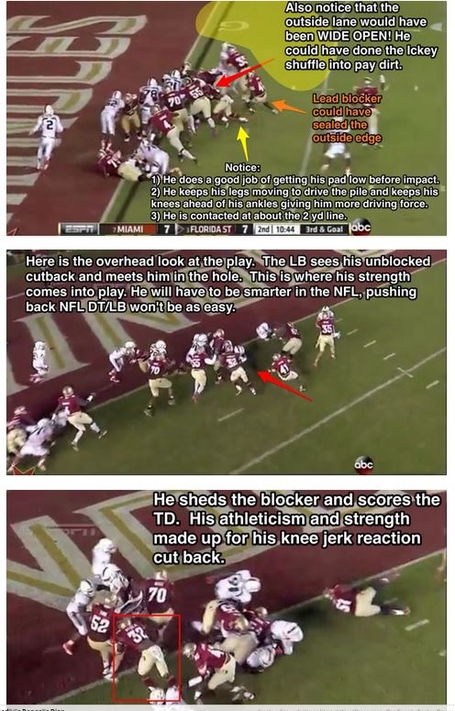 3) Diving for the pylon TD run: 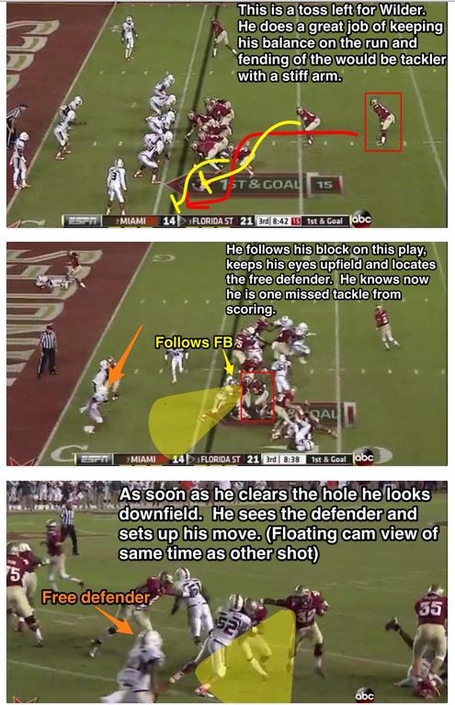 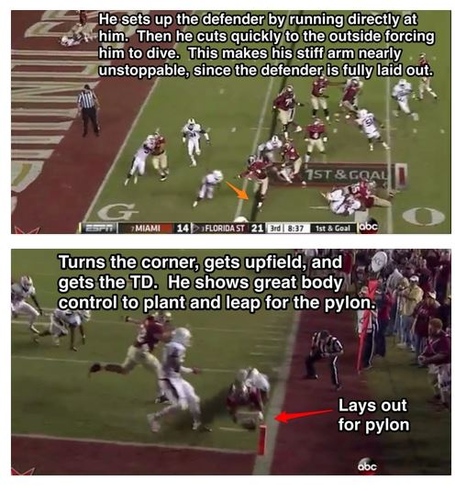 Final Thoughts:
Wilder is determined, and that is a big part of playing in this league.  Players really have to want it. There are going to be days they are sore, or when things don't break their way.  The good players suck it up and lift the extra set, run the extra sprint and watch the last hour of tape.

I think that Wilder is that type of guy.  After our exchange on twitter I have followed him closely and it seems he is focused on the task at hand.  He constantly posts about his workouts, not his nights out (i.e. Johnny Manziel).

The best thing about Wilder could be that Jimbo Fisher barely ever gave him the rock.  The running backs that he shared the backfield with are both good players. One was drafted this year in the fourth round, and the other one still at FSU might go even higher next year.

This is why Wilder is intriguing to me. As Hue said in one of the preseason games on Hard Knocks last year, "the cream will rise to the top."  I would not be shocked to see Wilder floating at the top come cut-down day.  Truth be told, the Bengals might have just done a complete overhaul on their backfield in just two years.

My Prediction: BJGE gets cut, and Wilder makes the squad over Burkhead.

Leave your comments and feedback on the article below or tweet me, I welcome discussions on draftees.

These screenshots came from videos from draftbreakdown.com

Special Thanks to Andrew Q for adding extra videos for this article..