No combine. No draft. No problem for Trey Hopkins, who's finding a spot with the big uglies in Cincinnati.

Share All sharing options for: Film Room: Trey Hopkins Finding a spot with the Big Uglies

Initial Thoughts: He has the body to play in the NFL as an interior lineman, but will need a good camp to make this team. He can play guard, tackle and in an emergency even Center. Here is a quote from [Trey] Hopkins Pro Day

"I want people to know I play all positions on the offensive line," Hopkins said. "I can snap, play tackle in games. And of course guard is where I played the most. I’m comfortable doing any of them." Trey Hopkins after his Proday

His versatility and health will be crucial to him making this team. He will likely have to beat out Hawkinson for the last OL spot. With guys like Boling, Pollak, and Whit all nursing injuries it is the perfect storm for him to sneak onto the roster.

Strengths: He is excellent at block transitioning; he passes off blocks and gets to the second level well. He has great character, is a hard worker, and has a chip on his shoulder. Very versatile linemen, he can play Guard, Tackle, and even Center in an emergency. He is a consistent player, he isn’t a mauler but he rarely whiffs on his assignment. He can bow his back in pass coverage and hold his ground when he needs to. He has good arm length for his size and his hands are average size. He is a strong guy and used to playing in a man blocking scheme.

Weaknesses: He needs to improve his fire off the line when run blocking; he tends to wait for the defender instead initiating the contact. He struggles when pulling from the guard spot; his quickness gets him behind the play or forces him to pull in front of the line. This causes him to occasionally get tripped up and not make the POA. He needs to improve his footwork to stay ahead of speed rushers on the outside; will need to lengthen his stride to play tackle in the NFL.

Key Plays vs Oregon: (played RT first 3 quarters and LG in the 4th)

1) He misreads the strong side (Texas Stunt) DE/DT stunt and gets beat to the inside. It causes early pressure on the QB, which results in the check down throw and no first down. (1:30)

2) Wins at the POA, seals off the defender, and opens the running lane behind him for a decent gain. (1:42)

3) He misses the delayed blitzer, who then has a free run at the QB. With the pressure in his face the QB throws the ball to early and makes an errant pass. (3:00)

4) Successfully makes the weak side cut block to keep the backside DE out of the play. (4:23)

5) He misses on the second level block of the Mike backer, allowing him to come up and make the tackle. (5:15)

6) He makes an excellent two level block; he chips the DE and passes the block to the guard on his flank. He quickly gets to the second level and seals the MLB inside allowing the RB to break off a big run behind him. (6:03)

7) He is in pass coverage for two consecutive drives and doesn’t miss any assignments. Great consistencies in his pass blocking.

8) He gets beat to the outside edge by the speed rush. Luckily the play was a screen play to the other direction so the DE did not have time to get to the QB. (10:00)

10) He does a good job pulling to the right and connecting with the LB during the running play. (13:48)

Key Plays vs Texas Tech:
1)  He does a great job of getting good position and holding the point of attack. (POA) He shows good knee bend to bow his back and hold his spot on the play. (0:24)
2) He is unable to pull quick enough to the right, forcing him to pull in front and not behind the Center. This causes him to have a bad angle on the block and for him to not be able to help the RB break free. (1:15)

3) He controls the line of scrimmage against his opponent for two straight drives. He is not beaten on either of them and does a good job in his pass protection reads. (1:30-2:55)
4) He gets caught up on the Center again when trying to pull to the right. The play turns out to be a big gain but he does not make a block. He will need to work on his foot speed and footwork to make it in the NFL. (3:00)

5) Great pass protection that allows for a deep passing TD. (3:30)
6) Misses on his pull again, he really can struggle to get out of his stance quick enough to get ahead of the play. (3:38)
7) He makes a great block transition in pass coverage to make sure the stunting DE is picked up. (4:26)
8) He picks up the stunting DE again making that back to back plays. He is very smart in pass blocking, even delayed stunts don’t usually fool him. (4:40)
9) He makes a great inside trap block of the NT keeping him out of the play. It sets up the alley behind him for the TD run. (5:43)
10) He gets out of his stance quickly and around the guard and makes a great pull block. He pull away from the play to open the hole where he came from. (6:32)
11) Makes a series of good pull blocks and drives the POA in a few running plays. Helps lead to scoring drives in back to back series. (6:45-7:52)
12) He has great arm extension on the passing play to hold the pocket for the QB. It allows for a great downfield pass. (9:15) 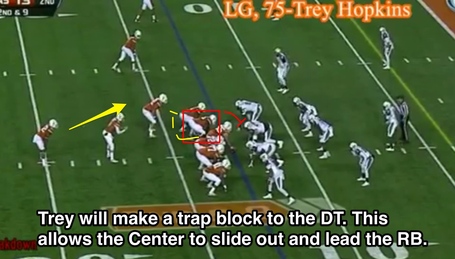 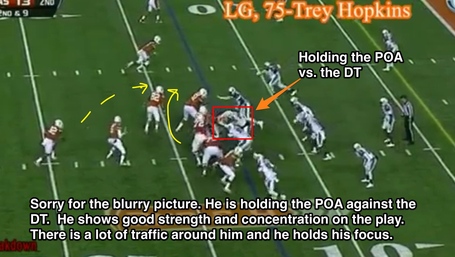 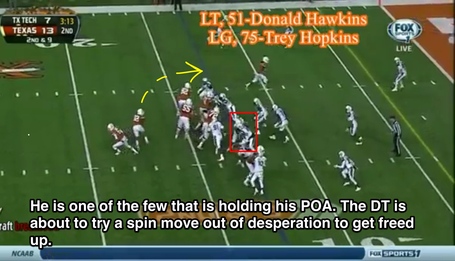 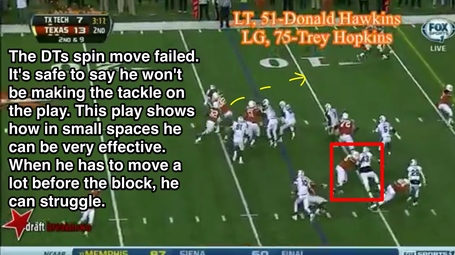 Breakdown of key play 6 vs Oregon a two level block 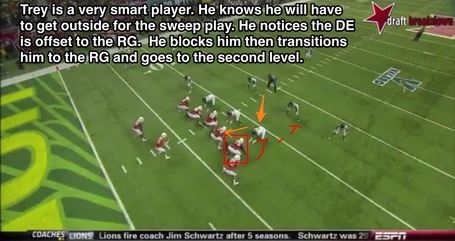 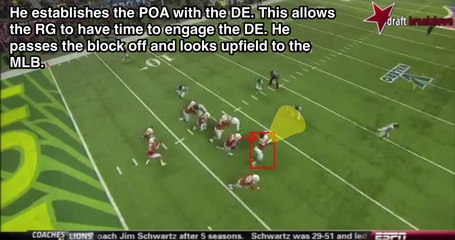 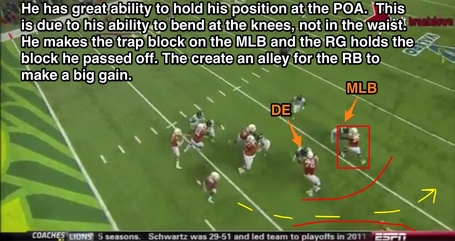 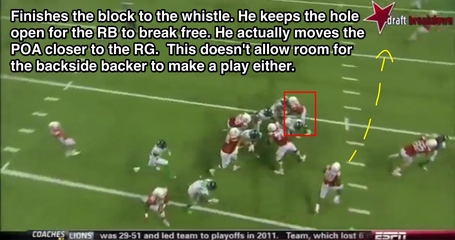 Final Thoughts:
Trey has some good tape from college and like any undrafted player he has some things that he needs to work on.  That being said, he has a really good shot at making this team.  They are deep at nearly every position on this roster, except offensive line.  From the Center left there are some major question marks on this team.  I am not saying I would be stoked to see Trey as the starting left guard week 1 against the Ravens.  I would be ok as him backing up a few spots on this line.

He has good form and the right build to play on the inside of the line in the NFL. He bends well and the knees and can bow his back to hold the POA. He is not super athletic so he will be the guy everyone will want the Bengals to "replace" next year because he doesn’t make splashy pancake blocks. He footwork needs improvement, he short steps his backpeddle when pulling sometimes. This causes him to get tangles up with the center and not make it out in front of the RB. At this point he has looked good in camp and would be the UDFA I pick to make the team, if I only get one. If one of the rehabbing lineman has a set back, or God forbid someone else goes down he is a stonecold lock! He looked pretty good in the first preseason game too (I know I said I wouldn’t use the preseason but I cheated).

My Prediction: Makes the final 53 as the backup LG; Confidence level Extremely High