Green-Ellis has been a reliable piece of the Bengals backfield. Heading into 2014 Green-Ellis has some young talent at his heels, and his quarterback will need playmakers to push the team to the next level.

BenJarvus Green-Ellis was signed to a four-year contract with the Cincinnati Bengals in 2012 after spending the first four years of his NFL career with the New England Patriots. He was brought into Cincinnati to fill the void left by veteran running back Cedric Benson. In 2012, Green-Ellis rushed for 1094 yards and six touchdowns. While he put together a solid season, the Bengals wisely drafted North Carolina running back Giovani Bernard in 2013 to compliment Green-Ellis with a shifty playmaker in the backfield. Green-Ellis contributed 756 yards and seven touchdowns in 2013.

Green-Ellis has a reputation as a back that will get you three yards when you need two, but he'll also get you three yards when you need five. As dependable as Green-Ellis can be in that regard, "dependable" may get trumped by the potential for big-play ability from young running backs like Bernard and rookie Jeremy Hill. Even if Bernard and Hill ultimately end up seeing more work, that doesn't necessarily keep Green-Ellis from making the final roster.

There's been plenty of speculation regarding Green-Ellis' future in Cincinnati, but the fact remains that Green-Ellis is admired by both players and coaches. It's very possible that he could end up mentoring players like Hill as Hue Jackson settles into his role as offensive coordinator in Cincinnati. Jackson has been very vocal for his love for Green-Ellis. For those that watched the Bengals on HBO's Hard Knocks last season, there was even a moment where Green-Ellis rode into practice on a golf cart with owner Mike Brown. Of course, the business of the game will supersede any friendly ties in most cases, but the Bengals organization has valued strong ties with players throughout their history. 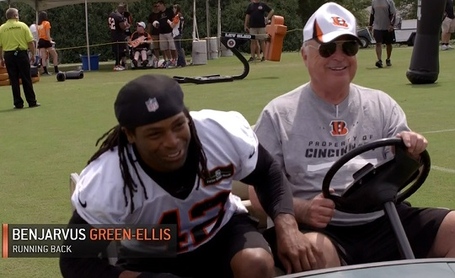 It's a crowded backfield in Cincinnati, but with one year remaining on his contract, Green-Ellis could very well be a contributor to the 2014 season both on and off the field.