The rookies had an overall good impact for the Bengals in Week 1, notably Russell Bodine, and there's a positive outlook moving forward.

The CB group didn't play well on Sunday. Hall got injured and was fortunately able to return, but didn't do anything of much note other than get burned by Jacoby Jones, who dropped a well-thrown deep ball (the same play that Vontaze Burfict suffered a concussion on). Newman and Kirkpatrick oftentimes seemed to be in the wrong position, surrendering numerous first downs. And obviously, Adam Jones had a huge blunder on Steve Smith's long touchdown.

Besides Jacoby Jones' drop, the CB group was bailed out a handful of times by other dropped passes, or wide-open targets that Flacco simply missed. Furthermore, the defense (not just the CB group) missed out on a handful of would-be interceptions.

Therefore, I'd say that Dennard's stock is trending upward. Once he recovers from his hip injury, he will be a sight for sore eyes for the Bengals CB group.

Jeremy Hill looked outstanding on Sunday when running in between the tackles. However, that was on only four carries. Hue Jackson decided to use Gio Bernard much more heavily than Hill. That may not be too much of a surprise, considering that Hue did the same thing at times with certain favorite Raiders players when in Oakland.

While Gio was effective in the passing game, he didn't seem to be as effective as Hill when running in between the tackles. It makes sense, considering their differing body types. Gio simply isn't meant to run up the gut repeatedly and take so many hits like that; it just wasn't effective. Same with Dalton, who had multiple designed runs.

The ineffectiveness of Gio and Dalton in running became obvious when the offense repeatedly stalled on third-and-short and/or in the red zone, having to settle for field goals each time. It would have made a lot more sense to use Hill on those occasions.

Based on Hill's great running on his few touches, and the obviousness that Gio Bernard (and Dalton) simply cannot do very well when rushing in between the tackles, I think that Hue Jackson will incorporate Hill more in the offensive gameplan moving forward.

Jackson said he went up to Hill after the game to specifically tell him he will be playing more going forward. Only had 10 snaps.

Plus, with Eifert out, Gio may have to be used as a slot WR more, thus allowing Hill to get more playing time at RB.

We'll probably see more of the Hill-Hewitt duo (note Hewitt, as a TE, is pulling from the strong side to the weak side): 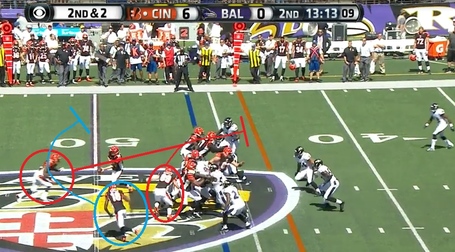 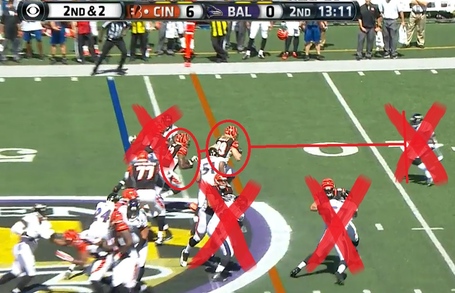 Furthermore, on special teams, Hill had an excellent block on Adam Jones' long punt return, getting his hands on the opponent's shoulder pads while driving his feet (see the right of the screen):

Despite the Bengals cutting Christo Bilukidi to go with just 8 D-linemen, Will Clarke was still inactive. Barring injury, Clarke won't be breaking into the defensive line rotation anytime soon; he is still far too raw. What also hurts him is that unlike Margus Hunt and Wallace Gilberry, Clarke doesn't contribute on special teams. If he were able to, then the team would probably be much more willing to activate him. Clarke is a project for the future, not an immediate contributor. For now, his stock is level, because this is what was expected of him.

Russell Bodine played well today, huge improvement from preseason. One holding call, but was quiet otherwise, which is good for a center

Russell Bodine had a shaky training camp and preseason. In his first start, he wasn't perfect either. He had one snap nearly go over Dalton's head, to go with a few more mildly errant snaps. He had one holding call. He had a handful of negative blocks, particularly in the running game. His most notable negative block in the running game was on a Dalton sneak, which would have likely been a TD with a better block:

this is why Dalton took off. NO ONE in front of him. Center lost block. Canty stopped play. https://t.co/zD8Yfyfree

However, this is nitpicking to a degree. Overall, I thought Bodine held his own for a fourth-round rookie center making his starting debut against the Ravens on the road. He (and the rest of the O-line) kept Dalton clean for zero sacks. In fact, according to Pro Football Focus, Bodine did not allow a single pressure on 43 pass-blocking snaps. That's great to see, considering he was going up against a fairly good NT in Brandon Williams. I also liked Bodine's second-level blocking on the numerous screen passes.

Bodine's most important block came on Dalton's 77-yard TD pass to A.J. Green. The Ravens put Haloti Ngata at NT and Chris Canty at DT, and also sent the nickel corner, Asa Jackson, on a blitz. Andre Smith shifted over to handle Jackson, and Zeitler shifted over to handle Elvis Dumervil. Whitworth and Boling double-teamed and neutralized Canty (I'm guessing Ngata was simply giving Williams a breather at NT).

Thus, Bodine ended up being matched one-on-one, by himself, with Ngata. Bodine was able to redirect Ngata over to Dalton's blind side and well out of the play, allowing Dalton to make a tremendous throw with nothing in his way. I was impressed with Bodine after that block on Ngata during the most critical play of the game. 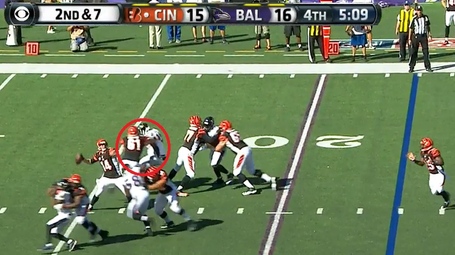 At this point, I feel very good about Bodine on pass-blocking. What I want to see moving forward is an improvement on run-blocking. On Sunday, the Bengals took a vast majority of snaps out of the shotgun, and that was likely in part because of concerns about Bodine being able to hold up against Williams in run-blocking, and those concerns were proven to be correct to a degree. Overall though, I definitely think Bodine can be an improvement over Kyle Cook.

AJ McCarron getting in a workout with rehab director Nick Cosgray #Bengals http://t.co/9trN1pXUpQ

Obviously, it is looking less and less likely that McCarron will ever take the title of Bengals starting QB from Dalton. However, he was never really expected to. Since the beginning of training camp, he has been out due to injury, and nothing much has changed. He's still a major contender to be the backup QB of the future.

Marquis Flowers was active on Sunday, participating on kickoff coverage as well as both the punt coverage and punt return units. He didn't record any statistics, but as you can see in the Vine above, he had one really nice block and another partial block on Adam Jones' long punt return. Flowers' stock is pretty much level, because this is what was expected of him. I'd say that his stock would go up if he were able to break into the LB rotation.

As you can see above, Wright was inactive along with Clarke. Wright suffered a concussion in the third preseason game; otherwise, he would have a decent chance of being active due to special teams ability. I suppose that with Marvin Jones out, he might be able to eventually get a few looks on offense, too, but Brandon Tate did an okay job in Week 1. We haven't heard anything about his recovery, so for now, Wright's stock is level. If he is very close to being able to play, then of course his stock goes up.

Hewitt got 11 snaps on offense, which included being part of the victory formation. He also participated on the kickoff coverage unit and the kickoff return unit.

With Eifert out, Hewitt should get more snaps. Hewitt is a true H-back, having received plenty of playing time at both FB and TE throughout training camp and preseason. So we should be seeing more of him at both of these positions. Hewitt's versatility will allow for him to do a lot of motioning and pulling.

As mentioned above, Eifert being out should be to the benefit of both Hewitt and Hill. Hewitt can be lined up at TE and then motion into the backfield to be a FB, or he can start out as a FB and then motion toward the line to be a TE. Or as a TE, he can motion from side to side. In any of these cases, the Bengals can do a direct run play, or direct pass play, or a play-action, or a draw, and the movement of Hewitt might be able to confuse the defense.