The Bengals are in a shotgun 3-WR flipped formation. Brandon Tate (orange) is the featured "Z" receiver on the left side, Mohamed Sanu (purple) is the "Y" WR in the slot on the right side, and A.J. Green (pink) is on the line of scrimmage as the "X" WR on the far right side. In this flipped formation, Gio Bernard (gray) is at RB to the left of QB Andy Dalton (red), and Jermaine Gresham (green) is at TE to the left of LT Andrew Whitworth.

The Ravens are in a 2-4-5 nickel defense. It is Chykie Brown, the Ravens' last CB on their roster, on Green. The Ravens have their best available CB, Jimmy Smith, on Tate and not on Green. The previous play before this one, Green was on the left side with Jimmy Smith, and Tate was on the far right side with Brown. Of course the Ravens would want Jimmy Smith on Green, so why not here? Well, according to Green, the Bengals were in the no-huddle. When Tate and Green switched sides for this next play, the Ravens didn't notice, or they did but it was too late to do anything. Because of the no-huddle, the Ravens were simply unprepared for this play.

I have highlighted the two Ravens outside CB in black. Asa Jackson (blue), showing blitz, is at slot CB on Sanu. Terrell Suggs (green) is at right OLB assigned to cover Gresham, though Suggs shows blitz. The two middle LB are Daryl Smith and C.J. Mosley, highlighted in gray. Usual NT Brandon Williams is not in this play; it is Haloti Ngata at NT. Chris Canty shifts to the DT position, and Elvis Dumervil is at left OLB. In the trenches, the matchup to watch is Ngata on C Russell Bodine (yellow). Playing deep safety are Matt Elam at SS, and Darian Stewart at FS (the safeties are out of view). 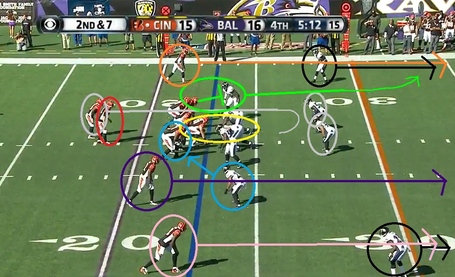 Bodine hikes the ball slightly errantly, but Dalton is able to collect it. Gresham is about to start an intermediate out-route, while Bernard does a simple curl route. All three wide receivers seemingly run go-routes. Jimmy Smith and Brown stay with their receivers, while Jackson blitzes. RT Andre Smith, who was about to block Dumervil, shifts over to his right and stonewalls Jackson (BA DUM TSS!).

(Stonewall Jackson spent most of his life in Virginia, especially Northern Virginia. Maryland was a border state in the Civil War, and many consider it to have been a de facto part of the Confederate States of America, considering its demographics and the fact that it was below the Mason-Dixon Line. So I am guessing that if Stonewall Jackson were alive today and had to be a fan of any one NFL team, he would be a Ravens fan. Furthermore, at the time, Baltimore in particular had heavy cultural and social Southern influences).

RG Kevin Zeitler shifts over to his right to take care of Dumervil. Suggs does not blitz and backs out to cover Gresham (who slightly chips Suggs), allowing Whitworth and LG Clint Boling to double-team and neutralize Canty (by himself, Boling was having trouble with Canty). That leaves Bodine one-on-one with Haloti Ngata. Bodine does a great job of redirecting Ngata over to Dalton's blind side and well out of the play. Paired with Zeitler's block on Dumervil, that gives Dalton a clear lane to make a great throw. Here, Dalton is in the motion of throwing the ball: 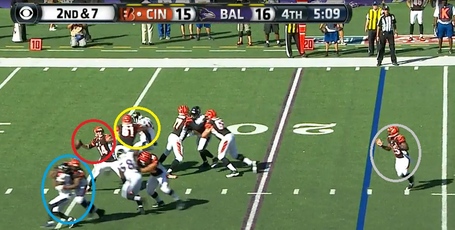 Jackson's blitz from the nickel CB position has failed. Sanu is running uncovered. Plus, Green does an out-and-in move (magenta) in his go-route (pink) which causes Brown to lose a step. Brown is caught somewhat flat-footed: 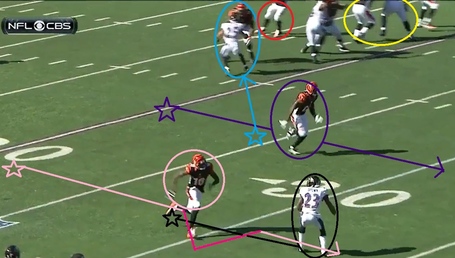 SS Matt Elam has to cover Sanu, leaving Brown without help on Green. Furthermore, Sanu does a post route, drawing Elam even further away from Green. Gio Bernard, waving his hands in the air, has drawn the attention of Daryl Smith and Mosley. Gresham continues to head toward an out-route along with Suggs. Tate is running straight ahead with Jimmy Smith. 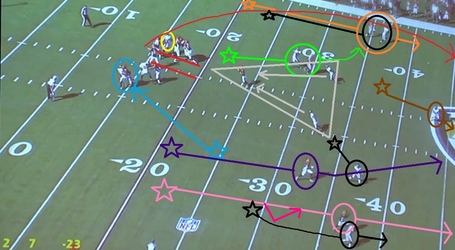 (The trajectory of Dalton's pass that I draw here is really close to the actual one. I made a mistake here, though: Jimmy Smith, covering Brandon Tate, starts out at about the 29-yard line, not the 24. So at the top of the image, you can move the black star to the 29 in your mind.)

In the Cincy Jungle comments section, Mismanagement raised a legitimate point that Dalton's pass, though great, may have been a bit late. Mismanagement is correct; Green had to slow up a bit. Dalton's throw itself was superb, but he would have been basically perfect had he thrown it immediately after Green's out-and-in move had been completed, i.e. when Green clearly got a step on Brown. That way, Brown would have no chance to catch up to and distract Green, and Green could easily catch it in stride on the same route (again, the throw itself was great).

But I'm not going to blame Dalton here after watching the replay. As Dalton is dropping back, he makes the throw only after Bodine and Zeitler fully take Ngata and Dumervil out of the play; Dalton does so immediately when that happens. Dalton may not have been able to make such a good throw without that clear line of sight, so it seems he may have been patiently waiting for that to open up. And I'm not going to blame Bodine or Zeitler either, because they both did a great job.

Green has badly beaten Brown, and slows up to catch the slightly late (but well-thrown) deep ball. Brown tries to catch up, and lunges for the ball and tries to bat it away. He whiffs (Green's fingertips have already initially grasped the ball here, at the Ravens' 35-yard line): 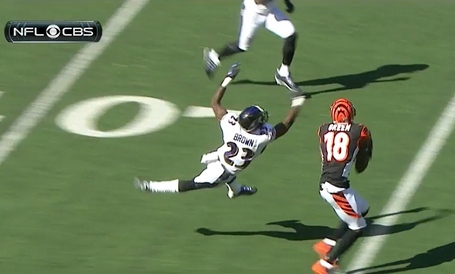 Here's a photo of virtually the exact same moment, from a better angle. Again, Green has already initially grasped the ball, before bobbling it: 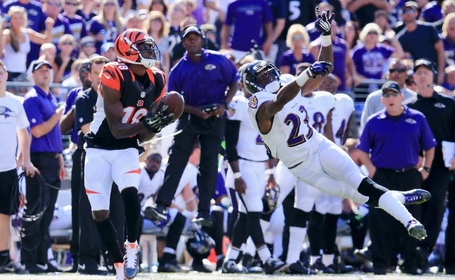 Brown does provide enough of a distraction for Green such that Green bobbles the ball. Just like when he juggles, Green is able to eventually secure the ball. He does so at the 25-yard line. Note that Green is drifting toward the sideline as he is juggling and eventually securing the ball. Then around the 19, Green pauses and waits for Stewart's momentum to carry him too far (note Brown is on his knees getting up):

Green jukes Stewart as Stewart flies by him. Then he jukes Stewart again when Stewart tries to come back. Basically, they zig-zag around each other a couple of times, and then Green walks straight ahead into the endzone. Touchdown!