Behind the Enemy Lines: A First Hand Account Of The Game From The Opposing Sideline

I spent Sunday's game on the Falcons sidelines as an assistant for the video team. Here is a first hand account of what goes on that you can't catch from the stands or the television.

Share All sharing options for: Behind the Enemy Lines: A First Hand Account Of The Game From The Opposing Sideline

When I arrived at the stadium I had to check in as staff. I received an all access stadium pass. I could literally go anywhere in Paul Brown stadium, no questions asked. 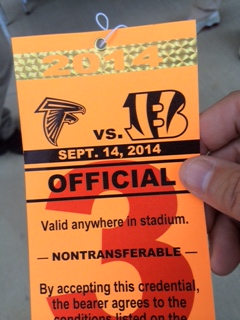 After getting on to the field I snapped a few pictures. I met Arthur Blank (Falcons Owner) and saw the pre-game warmups. 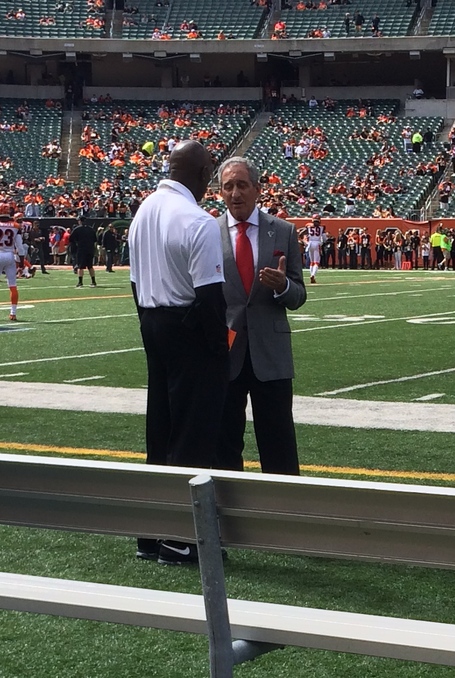 As it got closer to game time, I headed up to the press box for a pre-game meal. Then it was time for work. 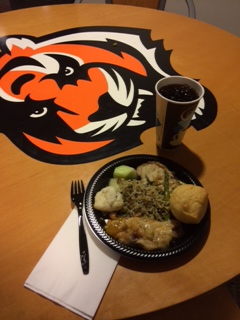 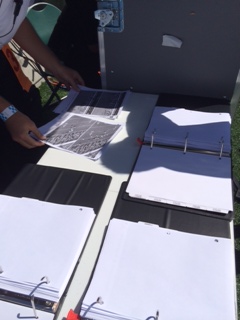 The Bengals first drive consisted of 12 offensive plays. The Bengals gained 64 yards on that drive. Seven of those yards were scrambles from Andy Dalton. The rest were from a combination of runs and short passes to the Bengals running backs Giovani Bernard and Jeremy Hill. It was obvious what the Bengals intended to do and the Falcons secondary wasn't impressed.

They can't pass on us. If we stop the run then we got 'em. - Robert Alford

It don't matter, they can't pass on us anyway. - Desmond Trufant

The Falcons go on to score on a Matt Bryant field goal and the sideline is pumped.

This was the first series where there was a decent amount of plays for secondary coach Tim Lewis to review. As he made his notes on the printouts I was able to listen as he gave instruction to the players about what he saw. For example he asked Alford to move up on certain reads or listened as McClain stated he was going to press on a particular formation. The adjustments were fast and the amount of knowledge the players obviously had on the formations and outcomes was impressive.

At one point Lewis asked Desmond Trufant about "that one play in the red zone" and without missing a beat, Trufant called out the read and what he did on his assignment. It was cool to witness. We see the plays develop during the game, but it was interesting to hear the discussion on the sidelines as the last series was discussed.

The following drive included the trick play where Mohamed Sanu tossed a dime to Brandon Tate down the sidelines. As soon as Sanu received the ball from Dalton, he was adjusting his grip. The coaches noticed this right away and began yelling "PASS!". It didn't matter. The impact was felt on the sideline like a punch in the gut. It was a gimmick play and it worked. When Mike Nugent missed the field goal to end the drive, the excitement returned on the Falcons sideline.

"That's what they do! They add a gimmick play to their opening script and then that's all they have! We took it and now it's our time" - Lewis

To the Falcons, the missed field goal was a big win. The defense was able to recover after being caught off guard on the Sanu pass and hold the Bengals to nothing. Spirits were high, there were smiles and the mood was positive. It was typical of what you would expect on the sidelines of any sport at any level. There was a lot of "Hey we got them" and "Let's make it hurt now.".

Even though the Falcons offense could not manage much of anything, the game was in reach. Mike Nugent continued to miss field goals and Cincinnati had not done too much damage in the passing game.

The Bengals next drive continued the trend. Hill had 2 touches and Bernard had 4 with the last being a touchdown.

The mood on the Falcons sideline was still positive, but there was an undertone. While the score was still in reach, the players knew they were being outplayed. A couple players were calling each other out. Vocal frustration over a missed tackle or assignment got heated and the coaches were shouting more instructions in between series.

Then, there was anger. It probably doesn't need to be said, but the Falcons sideline was not happy as .01 second was put back on the clock to end the first half. Most of the team was already off and running to the locker room for the half time break and to be called back frustrated them. It didn't matter as Nugent missed another field goal.

At half time we had a short break. The marching band from Ohio University was the performance and the time went fast. We swapped out our first half binders for the second half books.

The second half opened with minimal action. Both teams had an offensive series and both teams punted. The secondary for the Falcons were still confident that the Bengals couldn't hurt them. It's safe to say with A.J. Green out, there was little respect. The Falcons defensive coordinator felt it too. He put his guys on an island and that's when the game changed. Andy Dalton, facing a full blitz, finds Mohamed Sanu in single coverage. Sanu makes the catch and is off to the races.

After the touchdown the mood on the Falcons' sidelines was somber. Robert Alford took this one on the chin. He sat alone on the bench with no one (except me) within six feet of him. After a minute or two, Robert McClain and Desmond Trufant came over and told him to shake it off. They said "you are going to be the one to make the play that wins this game". The guys rallied around their teammate.

The overall mood on the sideline was quiet. Coach Lewis didn't want to review that particular series, he waved off the book. There were shouts of "This is where we answer" as the offense took the field.

The wind went out of the sails as Leon Hall dove to intercept Matt Ryan's tipped pass. The defense quickly grabbed their helmets as Ryan came to the sidelines, set down his helmet and grabbed his hat. His face was stoic, his grip on the hat was angry.

As Jeremy Hill plunged the ball into the endzone for the Bengals touchdown to make the game 24 - 3, most of the Falcons players knew it was over. Nate Stupar and Desmond Trufant never lost hope. Both these players attempted to keep the morale up even though the outcome looked bleak. Stupar turned from the sidelines to shout "We are still in this!". He was ecstatic as Ryan found Julio Jones for the touchdown to give the Falcons 10 points.

Then, the mood changed again. Shawn Williams took a cheap shot on an onside kick that was blown dead. Players on the Falcons sideline were instantly on their feet. Many were five to 10 yards onto the field yelling at the Bengals players. No longer were the players down about losing, they were angry at the Bengals.

Anger is the best way to describe the sidelines now. Every hit was watched and words were shouted from the Falcons sideline. Frustration set in as players began to call each other out on the sidelines. One such exchange went like:

"Man up, I have to worry about two guys because you don't know where you are supposed to be!"

"You play your F**king position and my guys will worry about theirs!"

Then it was over, the game ended and the Bengals won. I had a chance to look into the stands at the excited fans' faces. It was a great game and awesome to have the perspective I got. 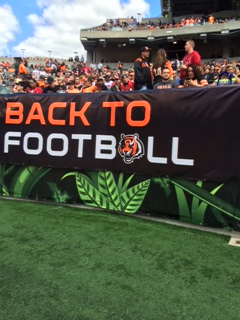 Apparently I made it on TV quite a bit. A couple screen grabs show how close to the players I was all day. 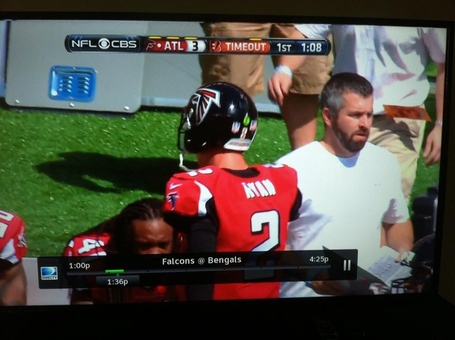 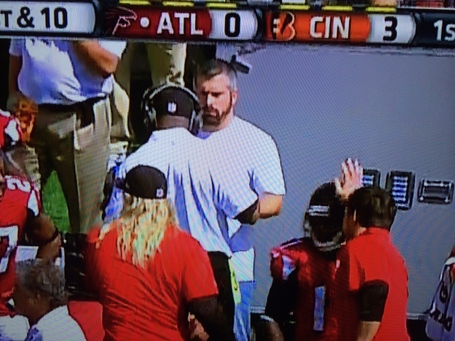