Early into the Week 2 matchup against the Falcons, A.J. Green was declared out due to a ligament strain. Before the game, Marvin Jones and Tyler Eifert were already declared to be out, and will continue to be out for a little while longer. It was up to the backup wide receivers to step up.

All of the healthy wide receivers the Bengals have on their 53-man roster were active on Sunday's game. Mohamed Sanu, normally the team's third WR and top slot receiver (technically a backup behind Green and Jones), was bumped all the way up to being the top WR.

James Wright, normally a special -teamer, was also able to see some action on the outside. Sanu played 71 of the team's 72 offensive snaps. Tate played 60, Sanzenbacher played 35, and Wright played 6.

Anthony is correct that the Bengals are stacked at many positions, we've known this for a while. But we haven't necessarily known this for the wide receiver position, at least until this Falcons game. Sanu is a solid possession receiver, but last year he messed up seemingly at the worst possible moments (e.g. at Chicago and Miami)

Sanzenbacher is also an okay receiver, but is slow and doesn't have much of an upside. Tate's speed and acceleration is a useful asset on gadget plays and go-routes, but many Bengals fans still have a disdain for him. Wright clearly has an upside, but is a seventh-round rookie.

All four of these guys were more about potential than actual production. Plus, some of us have still been smarting from the bungling of the Andrew Hawkins tender. Heck, maybe some people wish we had kept Cobi Hamilton, Ryan Whalen, Jerome Simpson, Andre Caldwell, Jordan Shipley, Dez Briscoe, and/or Armon Binns.

I doubt we were confident enough that the backup WR corps would look this good in spite of the opposing defense not having to worry about Green, Jones, and Eifert. Personally, I was (pleasantly) surprised.

With about 5:30 left in the first quarter, the Bengals were on the Falcons' 13-yard line in a standard shotgun formation with Sanu and Tate at WR. Sanu does a go-route and jukes his defender, Desmond Trufant, and easily beats him. Dalton overthrows what would have been a TD, but it is nevertheless a good job by Sanu: 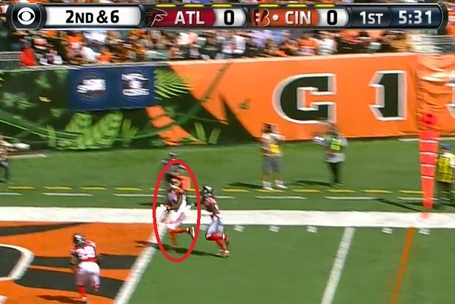 On the next play, the Bengals went into a five-wide shotgun set with Gresham and Hill on the right, and the trio of Tate, Sanzenbacher, and Sanu on the left. Sanzenbacher did a corner route to the end zone, including a juke that left slot CB Robert McClain in the dust. Dalton overthrew a would-be TD, but Dane easily beat McClain: 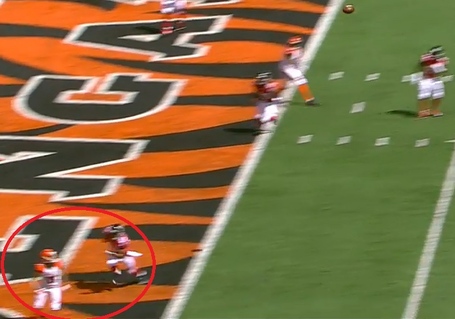 Later in the quarter, the Bengals were in an off-set I-formation with Dalton (purple) at QB, Gresham (orange) at TE, Ryan Hewitt (green) at FB, Hill (blue) at HB, Sanu (yellow) on the line of scrimmage as the X receiver, and Tate (red) as the featured Z receiver: 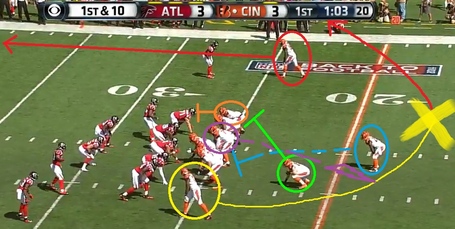 The Bengals did a play-action with Hill and then an end-around to Sanu. Sanu stopped in the backfield at the 17-yard line and threw a 50-yard dime to Tate, whose pure speed and acceleration on a go-route allowed him to beat Trufant and the over-the-top strong safety, Dwight Lowery:

Still can't believe the spiral Sanu threw and window he dropped it in #Bengals https://t.co/OpdfTFLO4a

Not only was it a great throw by Sanu, but it was also a great play by Tate. He starts off the play only jogging and pretending to half-heartedly block Trufant for a Hill run and then for a Sanu end-around, before immediately accelerating when Sanu got into position to throw the ball.

Later on the same drive, in the second quarter, the Bengals again were in a shotgun set with Tate, Sanu, and Sanzenbacher on the left. Sanzenbacher once again did a corner route with a juke move, and this time beat Lowery. Dalton overthrew the would-be TD, but it's still a great job by Dane: 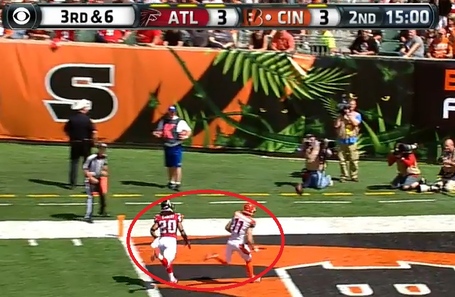 Soon after, Dalton passed up a wide-open crossing route for Hewitt (at TE) that would have been an easy first down, for a jump-ball between Tate and Trufant down the field, which Trufant broke up. Dalton did not pass up on the crossing route on the very next play, completing it for a first down to Sanzenbacher, who easily beat Lowery in the slot. Dane showed some decent athleticism, leaping to make the reception: 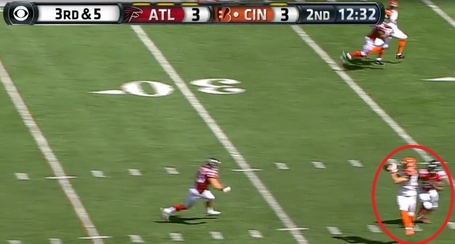 Two plays later, the Bengals are in an off-set I-formation with Hewitt and Bernard in the backfield, Sanu in the slot, and James Wright on the outside. The Falcons sent Trufant on a strong-side blitz, which Hewitt was supposed to pick up. Hewitt whiffed, and Dalton did a quick shovel pass to Bernard, who eventually hurdled a pileup of Clint Boling and Jonathan Massaquoi. It endd up being a 24-yard gain, in large part because Sanu and Wright were doing a good job of blocking their defenders downfield (Wright was well downfield here; this frame shows only Sanu): 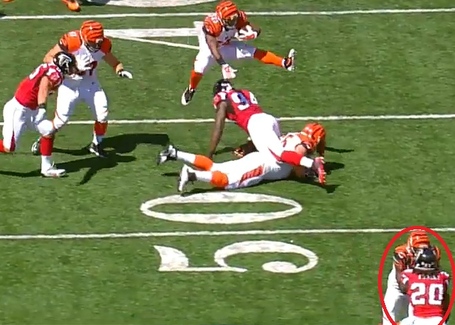 Later, we saw Dalton again with the deep ball to Tate. I actually thought Tate had Trufant beat, but Tate slipped.

On the Bengals' 91-yard drive for a TD in the first half, Sanu, Sanzenbacher, and Tate all generally did a good job of blocking. I was impressed by Sanzenbacher multiple times; he showed good effort despite his size, like Hawkins did. Because Dane was in the slot, he had to frequently mix it up with his defender when the Bengals ran it up the middle. On one occasion, Dane aggravated his defender enough that Dane was thrown to the ground well after the play, which I thought should have been an unnecessary roughness penalty. Sanu had this to say about Dane:

Sanu: If I'm ever in a fight, I want Dane with me. He will get after you. He's got that look,"--@holygrailbanks #Bengals

Dane was up-and-down on the Bengals' final drive of the first half. He had an impressive 26-yard reception on a crossing route against Lowery to move the Bengals into FG range. However, Dane had an unnecessary holding penalty on the next play, moving the Bengals to just outside of FG range, eventually leading to a long miss by Mike Nugent.

Both Sanu and Sanzenbacher really picked on Lowery throughout the game. Neither Mohamed nor Dane are particularly speedy, but they're apparently both faster than Lowery. Whenever either of them were in the slot at the same time, the Falcons had to move a safety up (Lowery) to cover one of them one-on-one, leading to a mismatch.

With Jones and possibly Green out for the upcoming Tennessee game, that could be a useful idea for Hue Jackson and James Urban: get Sanu or Sanzenbacher in the slot matched up on a safety.

The turning point of the game was Sanu's 76-yard touchdown. The Bengals run a very similar formation to that used in the game-winning touchdown by Green in Week 1, a shotgun 3-WR flipped formation. This time, of course, the personnel are different. Sanu (red) moved up to be the featured Z receiver, and Sanzenbacher (pink) moved up to be the Y (slot) receiver. Gresham (green) and Bernard (blue) were again on the left side of the formation, and this time, Tate (yellow) was at X receiver on the line of scrimmage: 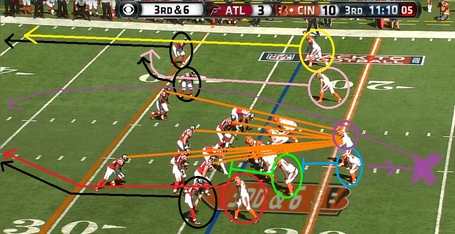 Sanu ran a post route, making the turn once he reached the 30-yard line. Tate went a go-route, and Dane did an out-route. The house blitz (orange) got to Dalton (purple) quickly, but under pressure, he let off a great pass (only Sanu could get to it) that was also timed well:

Robert Alford goes all-in for the pass breakup in this cover-zero formation, and misses. Touchdown.

Later, Sanu, on an out-route, simply outmuscled Alford both in terms of fighting for the ball on a good throw by Dalton and then fighting for the first down. It led to the Jeremy Hill touchdown run. Speaking of which... 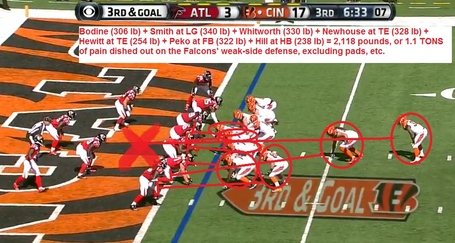 This one is fun to watch because there were many pancakes made, notably Russell Bodine on Paul Soliai. Note that Pollak is at RG and Boling is at RT, with Smith at LG.

In the fourth quarter, the Bengals finally gave Wright a target, replacing Tate with him. He was on the left side of the formation and did a simple 15-yard out-route, easily beating Robert McClain. Wright made an impressive leaping catch on a high throw by Dalton, and was able to keep one foot in-bounds, but not two. That play was reflective of Wright's route-running potential and physical upside. With Tate basically just a go-route and gadget (screens, swing passes, trick plays) receiver, we could be seeing more of Wright in the future.

I'm not going to blame Dalton much for all these missed throws. Dalton still had a good performance overall, and was especially outstanding against pressure:

Sanu is the only backup wide receiver who has gotten consistent playing time in the past. Dalton simply doesn't yet have the same rapport with Sanzenbacher, Tate, and Wright as he does with Green, Jones, and Sanu, and that's to be expected. As our backup receivers will likely continue to get plenty of practice with Dalton throughout this week in preparation for Tennessee, Dalton will likely become more in-sync with them.

All in all, Sunday provided evidence that we are stacked at many positions, including wide receiver.