Skip to main content
Breaking News THE DROUGHT IS OVER!!!

It was a good all-around performance by the back ups to get the win.

Margus Hunt was the star against the Colts but it was a good all around performance by the backups to get the win.

The first play we'll look at is this nice effort by Taylor Mays stopping the Colts short of a first down on their first drive. He comes off the zone coverage and reads the play very well, attacking the screen recipient with speed shedding a block on his way. 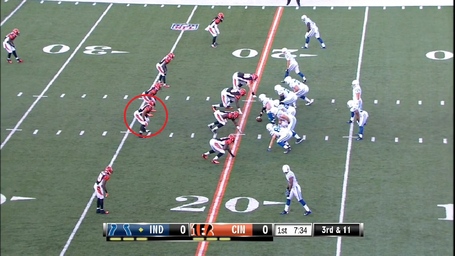 He waits and sees how the play develops, always looking at the quarterback not to lose track of where the football will go. 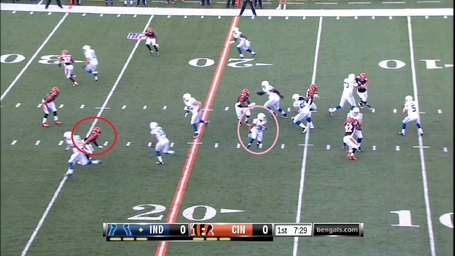 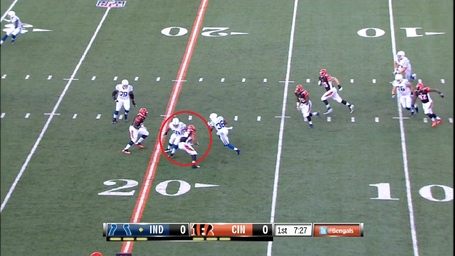 Sam Montgomery and himself combine to make the play and bring down the running back for a gain of only 2 yards.

Now,  we are going to see Will Clarke not look good after having a great look at the QB after breaking free from his man. 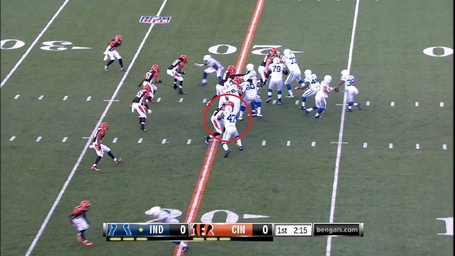 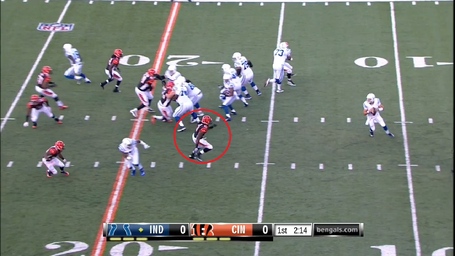 Clarke only has to run and try to get at the QB  before he can make the throw, but he slows down, and by the time he reacts, it is already too late (even though the pass is incomplete). 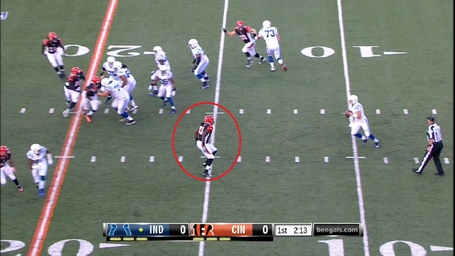 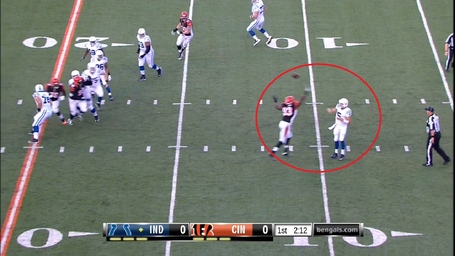 Here's a look at TJ Johnson (#60) with a nice block here opening up the gap for Hill on 2nd-and-10. He gets good leverage on the Colts linebacker. 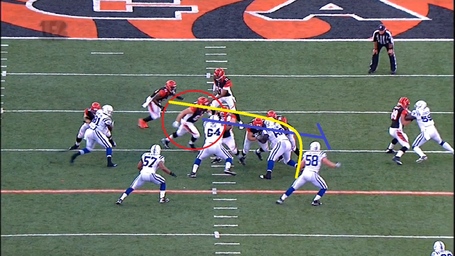 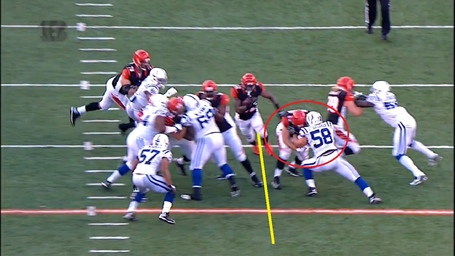 Good hand placement and nice move coming from the right side to get there in time. 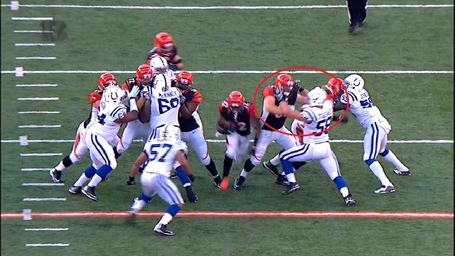 Remember Kirkpatrick's missed tackle on a huge punt return by the Chiefs?

It happens again here. He waits and slows down until the returner gets the footbal,l but cannot stop him. 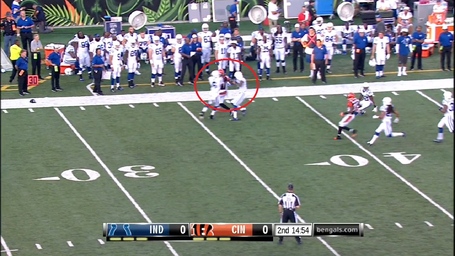 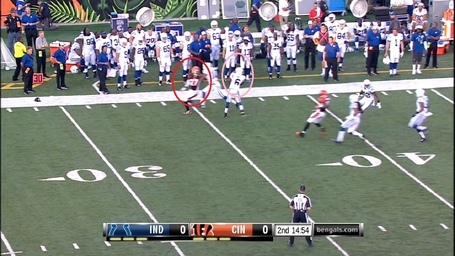 Marvin Lewis said Margus Hunt should dominate against the Colts, and he sure did.

Here against the run, he sheds the block to close the lane with only one arm. 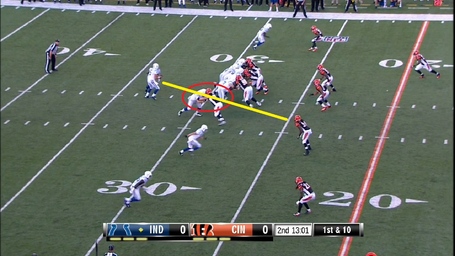 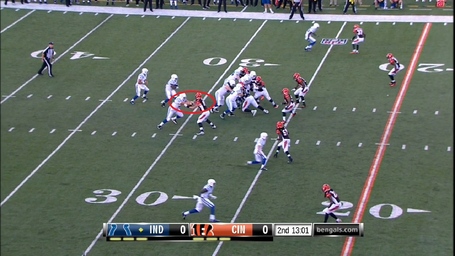 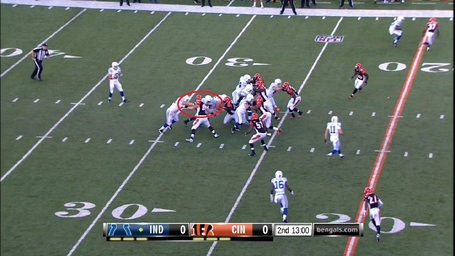 Indianapolis will find themselves on 3rd-and-7 before this great sack by Margus Hunt, who takes advantage of a nice effort by Dontay Moch. Moch gets first to the quarterback with a little bit of help from the left tackle that falls down easily. 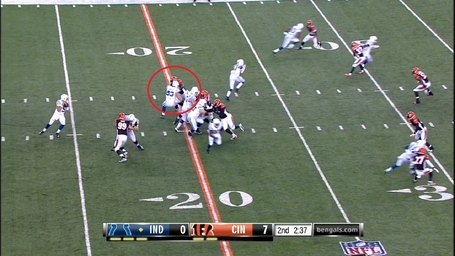 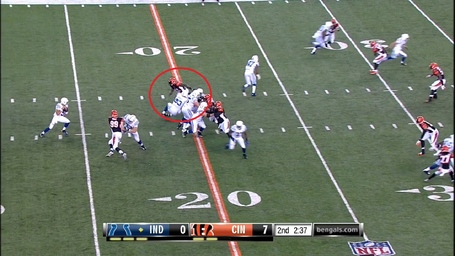 Quarterback sees Moch coming off the left side and runs straight into Hunt's arms. 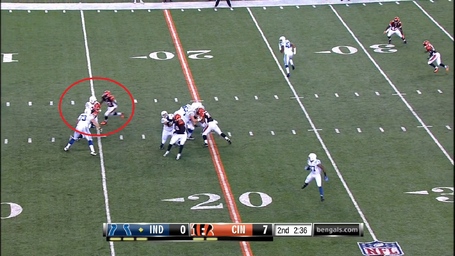 Next up is a nice 77-yard punt return by Dane Sanzenbacher. The key, though, were the first two blocks by Chris Lewis-Harris and Victor Hampton, leaving the former Bears wide receiver open all the way home. 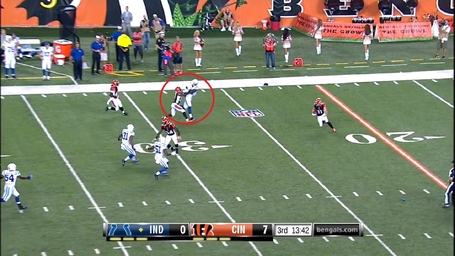 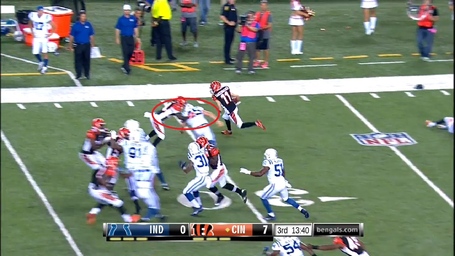 Here, Jeremy Hill is going to have another great run, only stopped by a missed block by WR Colin Lockett. 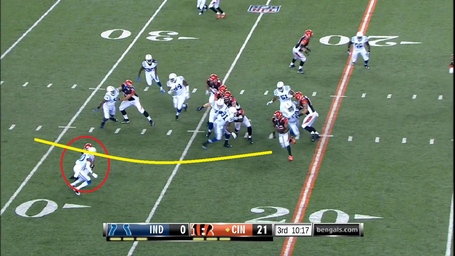 Lockett's man also stopped Jeremy Hill from getting a touchdown on his 40 yards run in the first quarter. 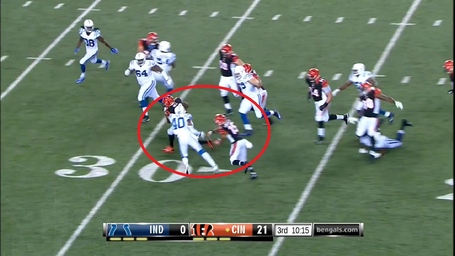 And for all the poor efforts we have seen from him, here is a nice play against the run by Will Clarke, reading the play, getting through the line and bringing down the running back. 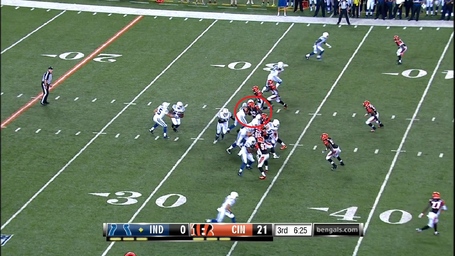 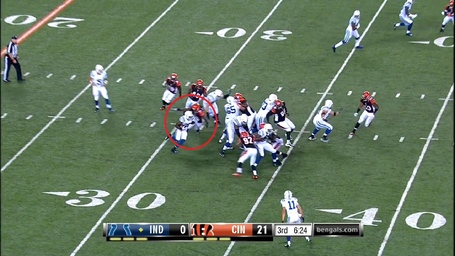 And what can we add to Hunt's third sack? He just overpowers the offensive lineman and works great with his hands. 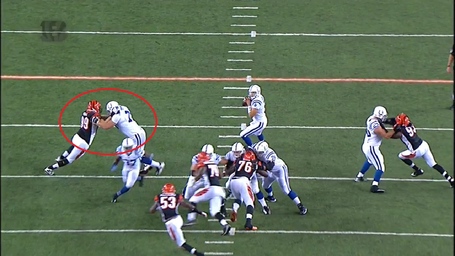 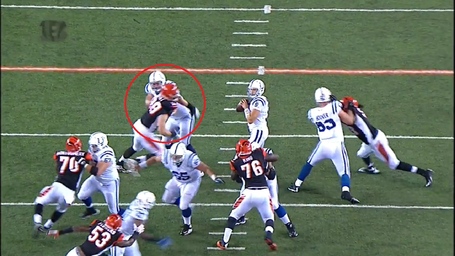 He will abuse the same guy again for another sack, shared with Montgomery later on in the third quarter.

Great to see a good show against one of the worst back up units in the league but, hey, a win is a win.