The Bengals have several players rated among the best at their respective positions.

Here are the highest and lowest-graded Cincinnati Bengals through three games from our friends at Pro Football Focus:

Though Burfict missed Week 3, he's still on pace to finish with a career-best grade. He finished 2013 with a 12.0 grade, and he's on pace to finish this year with a 36.4 grade. Burfict has blitzed at a higher rate than in his previous two years. He already has two QB hits in just a game's worth of work (missed nearly four quarters worth of football through the first two games, then missed all of Week 3).

Burfict had just eight combined QB hits in 2012 and 2013. He's also allowed just four passes to be completed against him for a mere 30 yards. The former undrafted free agent currently has the second-highest OLB grade, right behind Von Miller, the No. 2 pick in the 2011 NFL draft.

Shocker: The Bengals' best offensive player is their highest-rated player. Whitworth has been one of the NFL's best lineman even since he made the full-time switch to left tackle in 2009.

He doesn't catch 70-yard touchdowns like AJ Green, but Whit is the most consistent and reliable player for Cincinnati's offense. Maybe the rest of the NFL will start to take notice and get him to a Pro Bowl (he made the 2012 game as an alternate). He's currently tied for the fifth-best grade by an OT.

Smith has allowed just one QB hurry through three games while going against the likes of Terrell Suggs, Elvis Dumervil, Osi Umenyiora, Kroy Biermann and Kamerion Wimbley. Smith is still in his prime and should be recognized more for being one of the game's best right tackles.

Edging out the All-Pro A.J. Green by just .1 points, George Iloka has been a pleasant surprise through the first three weeks. While he was a solid role-player in 2013, Iloka is slowly becoming an impact-player this defense can rely on to make big plays at critical points in games.

He picked off Matt Ryan twice in Week 2 after grabbing just one INT in all of 2013. Iloka also has four pass deflections after getting just 10 in 2013. Iloka is also tied for fourth on the team with 12 solo tackles. When opposing offenses have had plays get to the second level of Cincinnati's defense, Iloka has consistently made the tackle to ensure the damage was minimal.

Iloka currently ranks as the 10th ranked safety by PFF out of 75 eligible players.

To be fair to Green, he basically missed Week 2 and likely played Week 3 with a sore foot. Still, he's managed to record 233 yards on just 12 catches (19.4 yards per catch).

Whether hobbled or healthy, Green is arguably the hardest receiver in football to defend because of his ability to make the catch at any point on the field, as evidenced by his PFF reception chart. 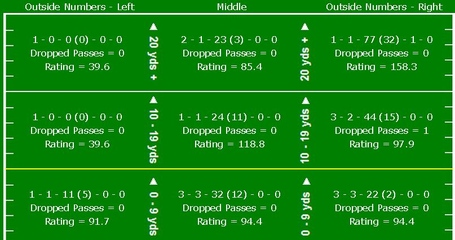