Jeremy Hill is averaging 5.1 yards per carry. The Bengals wanted a thunder to complement Bernard's lightning, and it seems they got it right.

Rookie running back Jeremy Hill is averaging 5.1 yards per carry. The Bengals wanted a thunder to complement Bernard's lightning, and it seems they got it right with the former LSU Tigers star.

With Jay Gruden gone and Hue Jackson taking care of the offense, we knew Cincy's running game would improve.

Hill, who has replaced good old BenJarvus Green-Ellis with fresher legs and a higher motor, has provided Cincinnati with the spark in the run game they've needed to help Andy Dalton and the rest of the offense.

We'll take a look at some of his plays from the Titans game to see how and where the second-round pick is making a name for himself in Paul Brown Stadium. Even though he played in just 15 snaps, he collected 39 yards in just 7 carries, getting 3 first downs on the way and the second touchdown of his young career.

This play is just one example of what Hill wll be able to do. In the first play of the second drive, (with 2 RB, 1 TE, 2 WR) Bernard is going to come out of the backfield to split up wide to the strong side.

Cincy is going to run a quick pitch for Hill who, despite a poor effort blocking by RT Smith (-0.6 grade by PFF), gets 8 yards while destroying a Titans player on the way. He also does a nice job keeping his balance after contact. 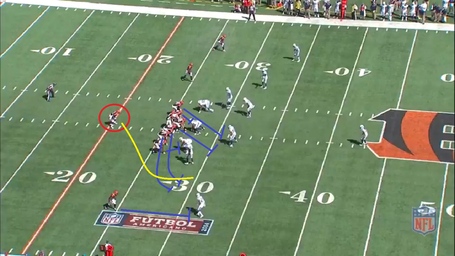 This is the exact moment where Hill bulldozers his way past the defender. 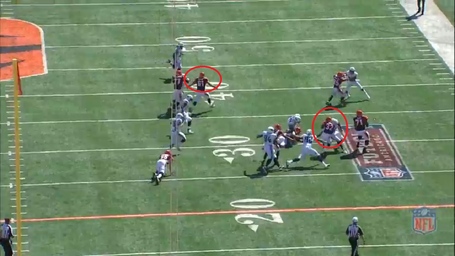 As you can see, if not for Smith's failure to contain his man, the runner had a free lane to the middle of the field, thanks to good second level blocks by Bernard and Whitworth. 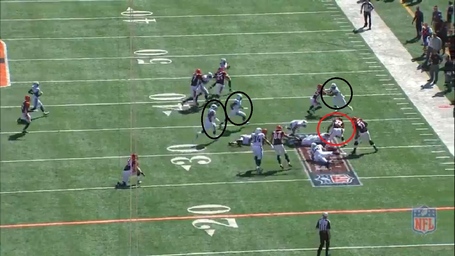 Even though he gained 8 yards, that first hit gave the defense time to close the lane and Hill had to go out where Bernard's man was to bring him down. Hill does good to keep his balance and pick up more yards.

Here in this formation (2WR, 1TE, 1FB, 1RB), the Bengals are going to attack the open side with a good pull block from Bodine and Smith and nice second-level blocking by Pollak. Hill sells the move to the right end, only to switch fast and attack the lane inside. 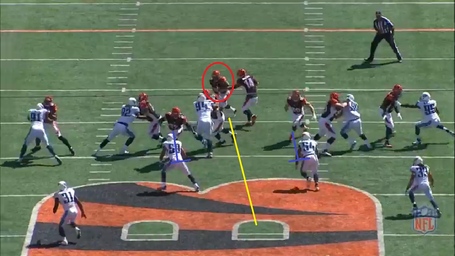 He bursts into the gap here, and although the safeties are there, the gain is good enough to keep moving the chains. 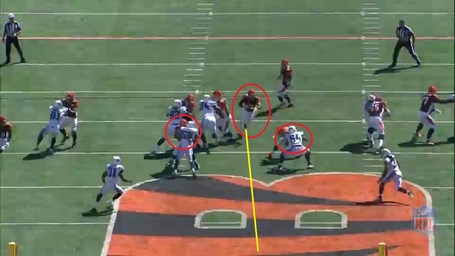 Although he will lose 2 yards a few plays later, Hill had a terrific afternoon and finished in style in the fourth quarter. The last period started with a nice play by Hill where he got 12 yards and again was able to gain 7-8 yards after first contact. 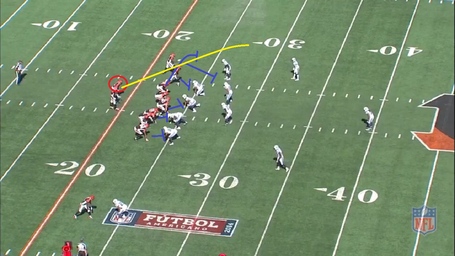 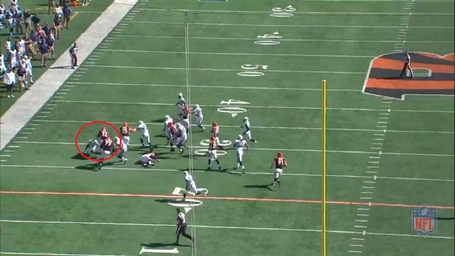 Good job by Whitworth (what a shocker) and nice second-level block by Boling, opening up a lane on the left side.

Of course, Hill will top this formidable drive with one of the better plays Bengals fans have seen so far in the early season, a 4-yard TD that was a no-gain play before Hill willed himself into the endzone.

What seems clear is that Hill has the tools (the power/speed combo our own Joe Goodberry highlighted in his draft sheet) to be a very good weapon in Hue Jackson's scheme, and that he'll be able to take some weight off Gio's shoulders later in the season.