Ndamukong Suh may already be eyeing an escape from the Lions. The same cannot be said for Ravens Coach John Harbaugh with Michigan.

The Detroit Lions are enjoying a 3-1 start to their season behind the strength of their defense, led by All-Pro defensive tackle Ndamukong Suh. However, the former second-overall pick of the 2010 NFL Draft is set to have his contract expire this offseason, and he may already be eying an escape from Detroit.

Suh, a three-time Pro Bowler, intends to test free agency and has previously told people of his desire to play in New York, according to an ESPN report.

Suh has told people in the past that he would love to play in New York, and the idea of it has huge appeal to him, league sources said.

If he were to take his talents to New York, either to the Jets or Giants, Suh knows how much it would mean for his brand and his profile, and it is something that if he hits the free-agent market this winter, when his contract is up, he will explore.

Ironically, Suh's Lions beat the Jets Sunday 24-17, so he gave them a good look at what they could have next offseason if they push for his services.

There were rumors this offseason that the Lions could be shopping Suh. While nothing ever materialized, perhaps they saw the writing on the wall that Suh was set to leave Detroit when his contract expired. 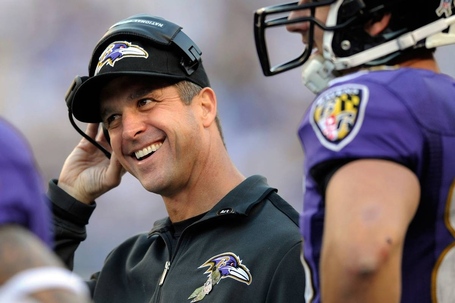 The Michigan Wolverines will be in the market for a new head coach soon. After a blowout loss at home to Minnesota, head coach Brady Hoke will almost certainly be let go by season's end, if not sooner. The school reportedly has interest in San Francisco 49ers head coach Jim Harbaugh, as well as his brother, Baltimore Ravens head coach John Harbaugh.

On Sunday, Ian Rapoport of NFL Media reported that the school actually preferred John as a potential Hoke replacement.