Michael Johnson returns to the Bengals after a year in Tampa Bay. Geno Atkins returns to full strength following a year where injury recover left him at less than 100%. Which return will have a bigger impact on the Bengals' defensive line?

Most fans who watched the Bengals in 2013 and 2014 could readily notice the 2014 incarnation of the defense was not as potent as the 2013 version. In 2013, the Bengals’ defense finished as a top-5 defense in both points allowed and yards allowed.

The passing defense was roughly the same in terms of Attempts Against, Completion Percentage, Touchdowns Allowed, and Interceptions. The big difference was in passing yardage – giving up 3,888 compared to 3,344 the prior year.

The Bengals gave up more than 500 more yards on six fewer passing attempts. This means their opponents were completing longer passes, which seems to indicate their opponents were given more time to throw the ball, and complete passes on deeper routes. The fact that the Bengals saw their team sacks fall from 43 (in 2013) to a league worst 20 (in 2014) does nothing to dispel the theory that the pass rush was a significant culprit in the diminished pass defense.

So what were the significant changes on the Bengals’ defense between 2013 and 2014?

Zimmer is staying in Minnesota for the foreseeable future, and there is no guarantee when Burfict is returning. So let’s look at the changes which we know are being addressed.

The loss of Michael Johnson

In 2013 Johnson started 15 games, contributing 56 total tackles and 3.5 sacks. His effectiveness against the run allowed a fresh Wallace Gilberry to rotate in on passing downs, where he contributed 27 tackles and 7.5 sacks

In 2014, Gilberry started all 16 games, and lost his opportunity to rotate in as a pass rusher. He did manage to achieve 50 tackles, but saw his pass rushing effectiveness diminish as he only tallied 1.5 sacks.

With Gilberry starting, the Bengals had to rely on guys like Robert Geathers, Margus Hunt and Will Clarke in the backup role. Their performance in this role was a far cry from what Gilberry had given them in a similar role a year earlier.

The return of Michael Johnson allows Gilberry to return to his effective role as a situational backup. And it also keeps the Bengals from needing to rely too heavily on last year’s underperforming Hunt, Clarke, or Geathers. Geathers was released from the team this offseason and it’s no guarantee that Hunt makes the final 53-man roster this year. Clarke, though is someone to keep an eye on this season. 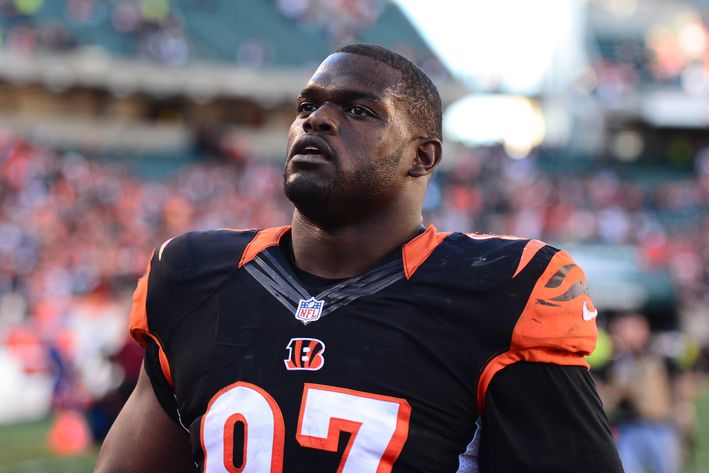 In Atkins’ 2012 All-Pro season he cranked out 12.5 sacks and 54 tackles. In 2013, he was again on pace for All-Pro production before suffering a season ending injury. In 2014, still recovering from the injury, his production was nowhere near what Bengals’ fans have come to expect, seeing Atkins tally only 36 tackles and 3.0 sacks.

Atkins was playing 2014 at less than 100 percent due to his recovery from the injury, and thus the drop in production. Unfortunately, due to the ineffectiveness of the Bengals’ defensive tackle backups (Devon Still and Brandon Thompson), the Bengals were unable to rotate Atkins off-the-field without facing a big drop in play from the position. Also, without an All-Pro caliber defensive tackle next to him, Domata Peko looked worse than normal last year.

Atkins slowly began to look like the real Geno Atkins by the end of the season, accumulating half of his sacks in the final 30% of the season, and showing flashes of the Pro Bowl player we all know and love. All indications in the offseason workouts and OTA’s are that the Atkins is looking like his former self.

The return of a healthy Atkins not only adds an All-Pro caliber tackle on the defensive line, but frees up blockers from the rest of the defensive line, allowing them to play more one-on-one. It also permits the Bengals to rely less on their unimpressive cast of backups behind Atkins.