Getting you ready for all you need to know on Tuesday, August 12.

1. The Giants are in town. The New York Giants are in Cincinnati for joint practices, starting with a session on Tuesday and wrapping up the two-day practice on Wednesday. The Giants will stay in Cincinnati, for the team's preseason opener on Friday at Paul Brown Stadium, where they are 3-0 against the Bengals in the preseason. For our temporarily displaced New York Giants fans, you can get realtime updates on Twitter by following Brennen Warner (Cincy Jungle), Paul Dehner (Cincinnati Enquirer), Jim Owczarski (Cincinnati Enquirer), Geoff Hobson (Bengals.com), Coley Harvey (ESPN), Jay Morrison (Dayton Daily News), Richard Skinner (Local 12), and Joe Danneman (Fox19), along with the Giants' contingent of beat writers making the trek. 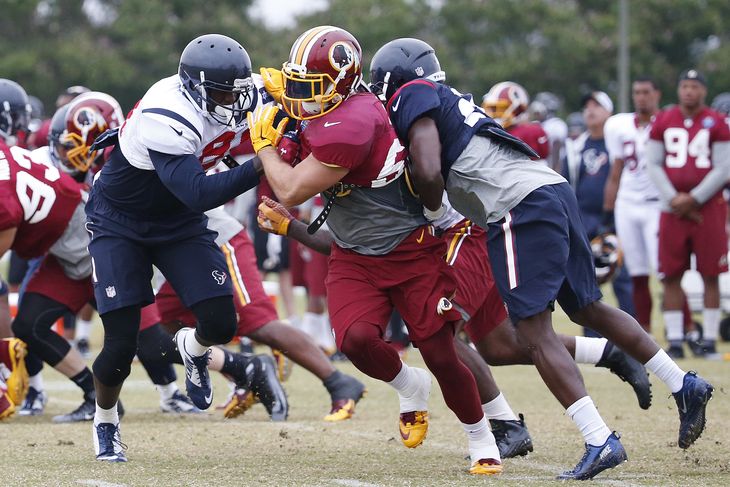 2. No tolerance for fighting. With the Houston Texans and Washington Redskins forcing their joint practice to split into segregated fields on Saturday due to fighting, head coaches Tom Coughlin and Marvin Lewis have each submitted public statements about how fighting won't be tolerated this week. "Whether it being talking and so forth, all of the nonsense and horseplay, we don't need that. We're here to have two good days of work and football," Lewis said this week. Indeed, the current Collective Bargaining Agreement is specific on how much a team can practice before incurring penalties; the Bengals (and Giants) want to maximize that work, rather than forcing unexpected audibles that waste productive work and valuable time.

3. Welcome back, Rey. Rey Maualuga was immediately inserted into the first-team defense as the starting middle linebacker after missing eight training camp practices (including a "mock game") on Monday. Cincinnati activated him from the team's Active/Non-Football Injury list after arriving at training camp with a hamstring issue. Vincent Rey, who opened camp as the first-team middle linebacker, moved to the weakside while AJ Hawk moved from weakside to the strongside. Linebackers Vontaze Burfict and Sean Porter, along with offensive tackle Cedric Ogbuehi, remain on the team's Physically Unable to Perform list or the Non-Football Injury list.

4. Bengals release their first depth chart. Head coach Marvin Lewis once said that the depth chart isn't even worth the paper it's printed on. Mike Zimmer, the once brilliant Cincinnati Bengals defensive coordinator, joked "what depth chart? Who is starting?" At the end of the day, there weren't many surprises; rookies were at the bottom of the depth chart and injured players in Marvin Lewis' dog house went from starter to backup. We would point to our observations and highlights but we're fairly certain most of the depth chart is crap and has already radically changed.

5. Escaping a rough practice. Monday's practice was believed to be one of the more punishing sessions, based on the heat, humidity and lack of wind. Several players took a break complaining of cramps and dehydration. Clint Boling suffered a minor knee injury but most reports indicate nothing is serious. It'll be of note to see if he's ready to practice on Tuesday against the Giants. In a rather amusing note, Eric Winston, listed as the backup right tackle on the depth chart, replaced Boling at left guard. Brandon Tate jogged to the cart, at one point during practice, and rode it to the locker room. Many of us think he just had to take a leak -- confirming our overzealous obsession about the Bengals.