Prediction: Jeremy Hill will have career game vs Browns

Jeremy Hill usually plays well against the Cleveland Browns, but this week he might be poised to put up his best game ever.

Share All sharing options for: Prediction: Jeremy Hill will have career game vs Browns

When the 4-7-1 Cincinnati Bengals travel to Cleveland this week to take on the 0-12 Browns, most fans and analysts around the NFL probably won’t give the game a second thought. It’s two teams that aren’t making the playoffs this year facing off late in the season for what is really nothing more than a glorified exhibition game. Yes, the Bengals and Browns are long-standing rivals who will be battling for respect across the state of Ohio, but the game means essentially nothing for the NFL season as a whole.

That said, fans of dominating rushing performances might want to tune in to the Bengals-Browns game this week. It feels like the conditions are right for a torrential downpour of production from Bengals running back Jeremy Hill, who tends to dominate the Browns more often than not.

It hasn’t exactly been a season to remember for Hill and the Bengals’ running game. He has only recorded triple digit yardage in one game this season. But, that game was of the best games of his career, when the Browns came to Cincinnati (192 all purpose yards, one touchdown).

That game helped Hill to put together a string of strong performances over the next three weeks (184 rushing yards, two touchdowns). Unfortunately, his effectiveness in the running game has regressed over the past two weeks (54 rushing yards, one touchdown).

“I feel like we’re back to what we’re doing the first couple of weeks of the season,” Hill told Geoff Hobson of Bengals.com. “We have to find a way to get ourselves out of that, get some chemistry together and get the running game going.”

In fact, he was particularly ineffective in the running game last week against the Eagles (1.4 yards per carry). 5 keys to a Bengals victory over the Browns

The Bengals travel to Cleveland to face a Browns team that is starving for its first win of the season. What does Cincinnati has to do to keep their slim playoff hopes alive? 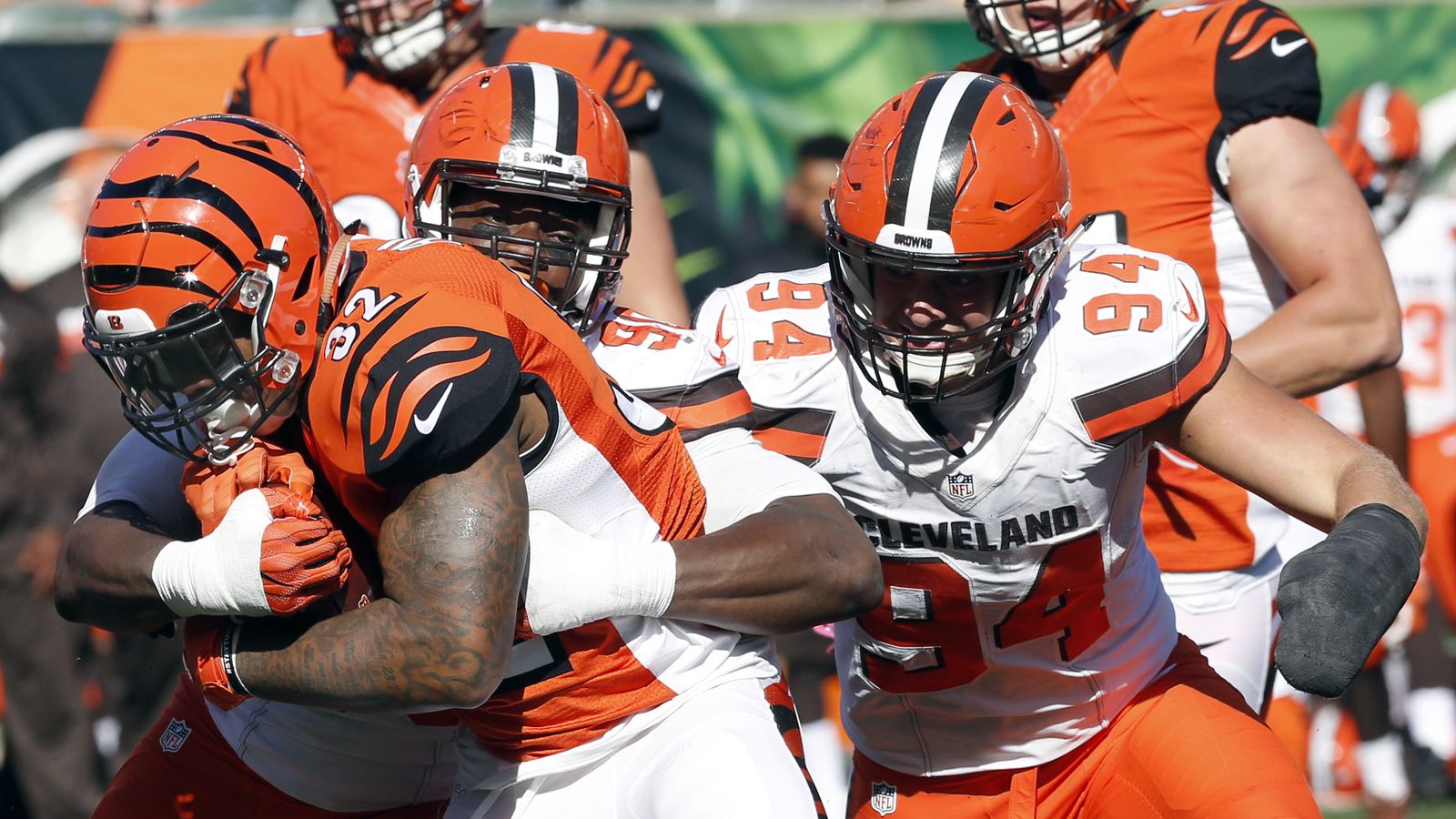 There was a time when the Browns were a consistent thorn in the Bengals’ side despite generally playing poorly otherwise. But, that trend has not been an issue over the past couple of years.

“Never in my life. Never had I done that before,” Hill said. “At the end of the day it’s getting rid of the negative plays. However I can get rid of them. It definitely kills the average. I just have to keep grinding, keep sticking to it, and not getting out of myself.”

One nice thing for Hill and the running game, and a big part of the reason I think Hill will shred the Browns this week, is that the Browns are currently sporting the second worst run defense in the NFL (140.6 yards per game). That, combined with the fact that he seems determined to improve over his awful performance against the Eagles and the fact that he has recorded at least 98 yards and a touchdown in more than half of the games he’s played against the Browns, suggests that he will be both able and motivated to absolutely crush a pathetic Browns run defense.

The one thing that seems to be preventing Hill from breaking out for a big performance this game is the offensive line. They have generally performed poorly as run blockers this year, and were all notably awful against the Eagles, contributing significantly to Hill’s ability to only put up 1.4 yards per run. But, don’t tell that to Hill, because in addition to being motivated to improve his numbers, he seems motivated to reward the offensive line for what he feels has been an admirable performance.

“Our guys have battled all year. That’s the thing I respect about our O-line since I’ve been here,” Hill said. “They battle every week. They’ve gone against some tough matchups all year. As a unit we have to find chemistry. Whether it’s a penalty, an error, whatever it may be, we have to find a way to get it fixed.”

Regardless of who is to blame for the Bengals’ struggles in the running game, Jeremy Hill is a very talented running back who tends to prove himself when he plays the Browns. This week, he is looking for an excuse to absolutely shred a team like the one he’s facing, and there’s no reason to think that he can’t or won’t do it.