2016 hasn’t given the Bengals much to get excited about, but Tyler Boyd has been one of the exceptions.

Share All sharing options for: Tyler Boyd’s rookie season has been leading up to rematch with Pittsburgh

The Bengals don’t typically see a lot of production out of rookies. They prefer to allow first year players to sit and learn for a while before throwing them into the fire. For Tyler Boyd, however, it has been a fairly atypical rookie season. Of the receivers who comprised the team’s roster in 2015, only A.J. Green and James Wright remained at the end of a tumultuous offseason. It was a situation that essentially required Boyd to play a much bigger role in the offense than the Bengals would normally ask of rookies.

However, Boyd has performed admirably thus far. He spent most of the season as the No. 3 receiver on the depth chart, but has been the No. 2 receiver behind Brandon LaFell since Week 11 when Green exited the game with a hamstring injury. In 13 games, he has recorded 48 catches for 526 yards and a touchdown as well as three runs for 43 yards. Those numbers already exceed the numbers of last year’s No. 3 receiver, Mohamed Sanu, and are on pace to be comparable to Marvin Jones’ 816 yards and four touchdowns from 2015.

That’s really impressive for a rookie. You could argue that those numbers are inflated due to his increased production with Green out, but it also shows that Boyd has the ability to step up when the Bengals need him the most. He has absolutely been as productive as the Bengals could have expected, a feat that he attributes to his confidence increasing as his reps do the same.

"I'm definitely feeling a lot more confident in my game," Boyd told Katherine Terrell of ESPN. "I'm going out there and feeling like how my last year of my college career was. I'm feeling so confident that guys... can't guard me. I want to have that mentality. I'm just trying to get better every week."

That theory was echoed by quarterback Andy Dalton, who has started to develop more chemistry with the young receiver lately after being forced to let go of his Green security blanket.

“I think he’s playing faster because he has a better feel for the game and of what we’re asking him to do," Dalton said. “It comes back to the whole confidence thing, knowing he’s going to be in the right spot. It’s knowing that when he gets there, the ball will be on time. That’s the biggest thing. He’s gotten a lot more comfortable with what we’re doing.”

Thus far, it appears that the selection of Boyd in the second round of the draft was a great move by the Bengals. Only Michael Thomas and Sterling Shepard have more receptions as rookies this year, both of whom were drafted ahead of Boyd. Those two plus Will Fuller and Tyreek Hill are the only rookies with more receiving yards. Of those four rookies, only Hill was selected later than Boyd in the draft.

“We haven’t had many young guys since A.J. was a rookie have this kind of experience. You wish you could restart it with those guys and see how they go because of how much better they get week in and week out," Bengals coach Marvin Lewis said this week. "Tyler has all of a sudden become a much better blocker, now that he has become better at being in better spots and being more involved in the offense. It raises your level in everything.”

One notable thing about Boyd this year is the fact that he simply hasn’t made many critical mistakes. In fact, the only particularly devastating one was a late fumble that he dropped against Pittsburgh in Week 2. Many Bengals fans and even the announcers for that game didn’t believe it was really a fumble, but after review, the call stood. Whether it was a fumble or not, letting go of the ball was a mistake that Boyd still remembers and laments, even though he has played excellently since. 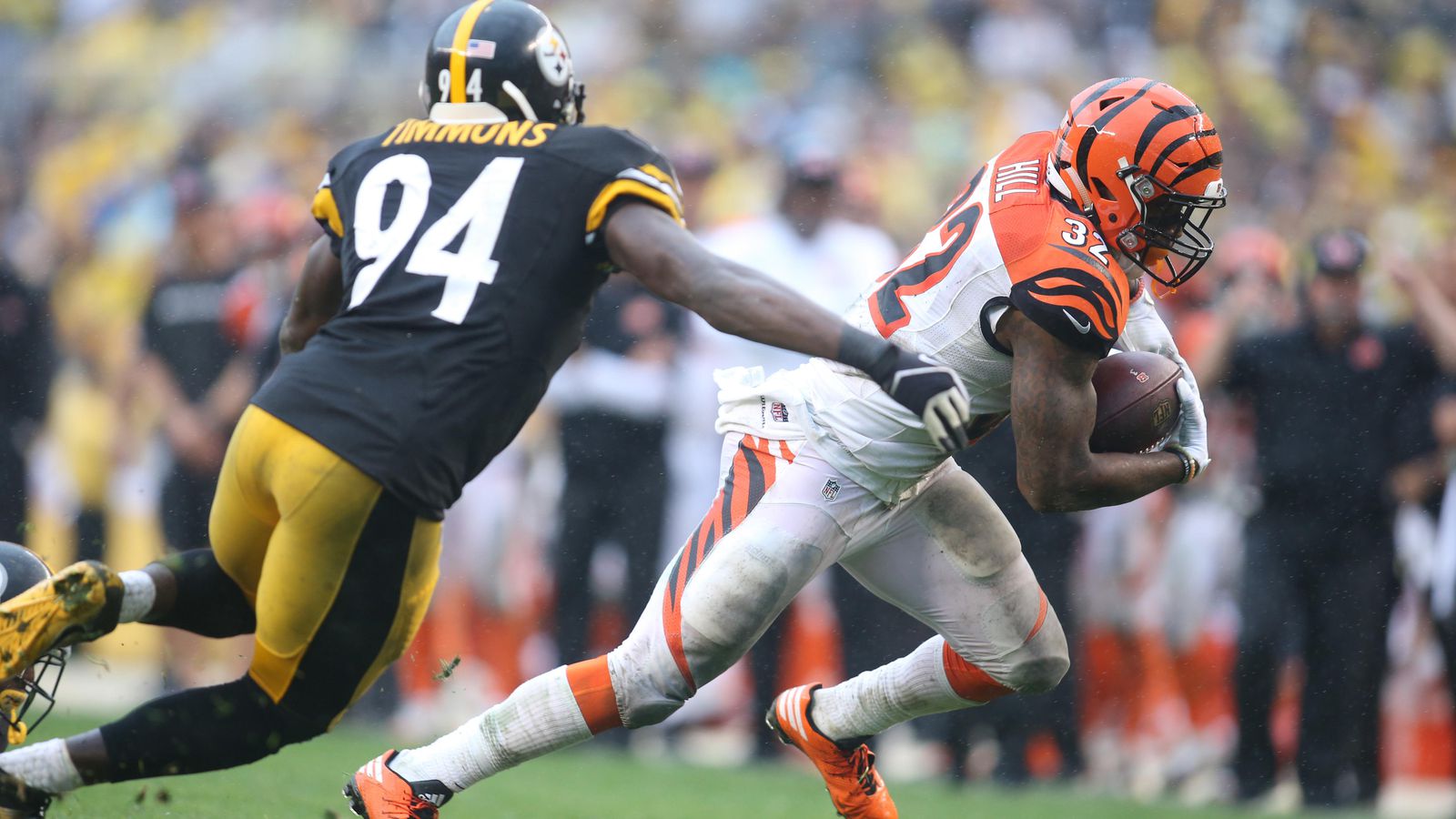 The Steelers travel to the Queen City for the second leg of this (recently) always-interesting AFC North rivalry. 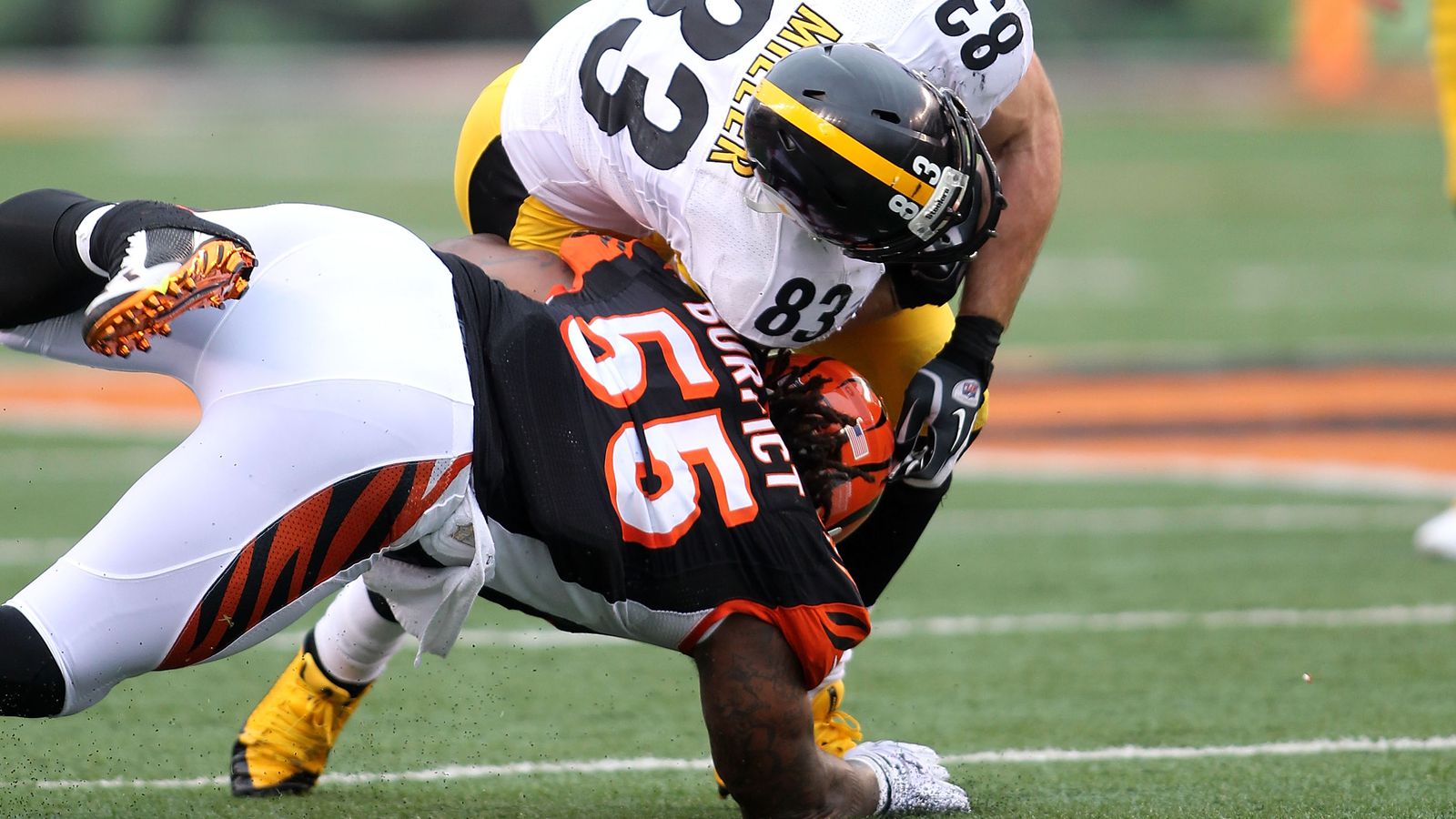 Vontaze Burfict is ready for the Steelers

Marvin Lewis and Adam Jones sounded as confident as they’ve ever been in Vontaze Burfict this week as he prepares for his first game against the Steelers since the infamous Wild Card game back in January.

"I definitely felt some type of way because we were in a scoring drive, had an opportunity to continue playing, take it to overtime and come up with a win," Boyd said. "It's always hard on a player who messes up [the chance] to win the game. ... So I'm just going to do everything I can this week to [make] everything go positive."

However, even though there was plenty of discussion of whether or not he actually fumbled the ball, he owned his mistake and is using it as motivation this week to help his team get revenge for what happened in Week 2.

"I've been getting calls all week, everybody telling me, 'I hope you had 100 yards, five touchdowns, this and that, but I hope y'all lose.' But I hope we win," the Pittsburgh-area native said. "At the end of the day, I'm playing here for the Bengals organization. It doesn't matter who we play, but a Steelers win to me, it's going to mean a lot."

With Green doubtful to play this week, Boyd has an opportunity to take advantage of the moment and he seems motivated to do so. If he can, the NFL will need to take notice of this young receiver from Western Pennsylvania.