The Ravens keep toying with fate down the stretch. The Steelers maintain their division lead after a comeback against the Bengals. The Browns are searching for answers, but the ones they’re finding are incorrect.

Week 15 has come and gone, and the Steelers still sit atop the AFC North. The Ravens are right behind them though after surviving against the Eagles, who had a chance to win at the end of the game. The Browns keep doing what they do best, and that is losing games.

We have all been here before. The Steelers took advantage of the Bengals and the aftermath is sadness. It isn’t as bad as the loss in January, but this trend needs to stop. The Steelers are a very talented football team, and sometimes you have to anticipate losing to good football teams. But the Bengals have lost four straight games to Pittsburgh.

It didn’t seem like this is what we’d be talking about during the first half. The Bengals were moving the ball and putting up points while holding Pittsburgh to field goals. In fact, the defense did a great job all day of containing the Steelers’ potent offense. Then the second half happened.

As for the Steelers’ offense Le’Veon Bell was held under 100 yards rushing, but he hauled in five catches for 38 yards to get him over the century mark for yards from scrimmage. Antonio Brown was also held in check. He finished with three catches for 58 yards. He did have a touchdown called back due to a Bell chop-block penalty. Ben Roethlisberger managed to spread the ball around to the rest of the receivers as six guys not named Brown caught passes. Ladarius Green, who was the team’s leading receiver on Sunday, is now in concussion protocol after a hit late in the game.

The Steelers proved Sunday that they were the better team in 2017, and that should leave everyone in the Bengals’ organization, top to bottom, with a horrible taste in their mouth.

Bell is arguably the best running back in the game, but for how talented he is, he is equal parts frustrating. After the game Bell said the Bengals were trying to hurt him again.

He says this with little to no evidence, especially as there were no plays during which Steelers were injured evidently by the Bengals. All a claim like this does is keep the bad blood alive. I’m personally tired of hearing how Vontaze Burfict intentionally hurt Bell with a routine tackle, and he followed it up by celebrating (it had to be celebrating the injury and not celebrating a good play in his first game back from microfracture surgery. HAD TO.). The Reggie Nelson hit from 2014 was low, but if you carry the ball enough you will get hit like that from time to time.

These teams don’t like each other. Period. There really isn’t a need to drum up drama that isn’t there.

The Steelers weren’t the only ones to fuel the fire though. Jeremy Hill celebrated his touchdown by tearing that stupid, overpriced piece of cloth. For the sake of us fans, Hill, if you’re going to do that please make sure you win. Now we have to hear about a stupid curse that every Steelers fan wants to talk about.

The Ravens won on Sunday like they have won most of the year. They played down to their opponent's level, but made a play at the end to survive.

The Ravens and Eagles were back and forth for most of the game, but Baltimore looked to have the game on ice when Mike Wallace took the ball into the Eagles’ red zone up 27-17 with a little over six minutes left. But Joe Flacco instantly gave the ball back via an interception. Philadelphia went on to kick a field goal and then score a touchdown with four seconds left.

The Eagles, who had converted a two point conversion earlier in the game, decided to go for the win. Carson Wentz tried to throw it over the blitz on a slant route to Jordan Matthews, but the pass was deflected at the line.

Sometimes it is hard to tell when a team is lucky or just makes the plays when they need to, but Baltimore is banking on the later being true heading into an ever important matchup with the Steelers.

Obviously the Ravens’ best option of making the playoffs is beating the Steelers next week and then the Bengals to win the AFC North. However, with Denver’s loss to New England, the Dolphins have jumped into that final Wild Card playoff spot. But will they be able to hold onto it? Is it possible that another team besides the Ravens or Steelers could take the last Wild Card spot with the team that comes in second place in the AFC West almost certainly getting the 5 seed. 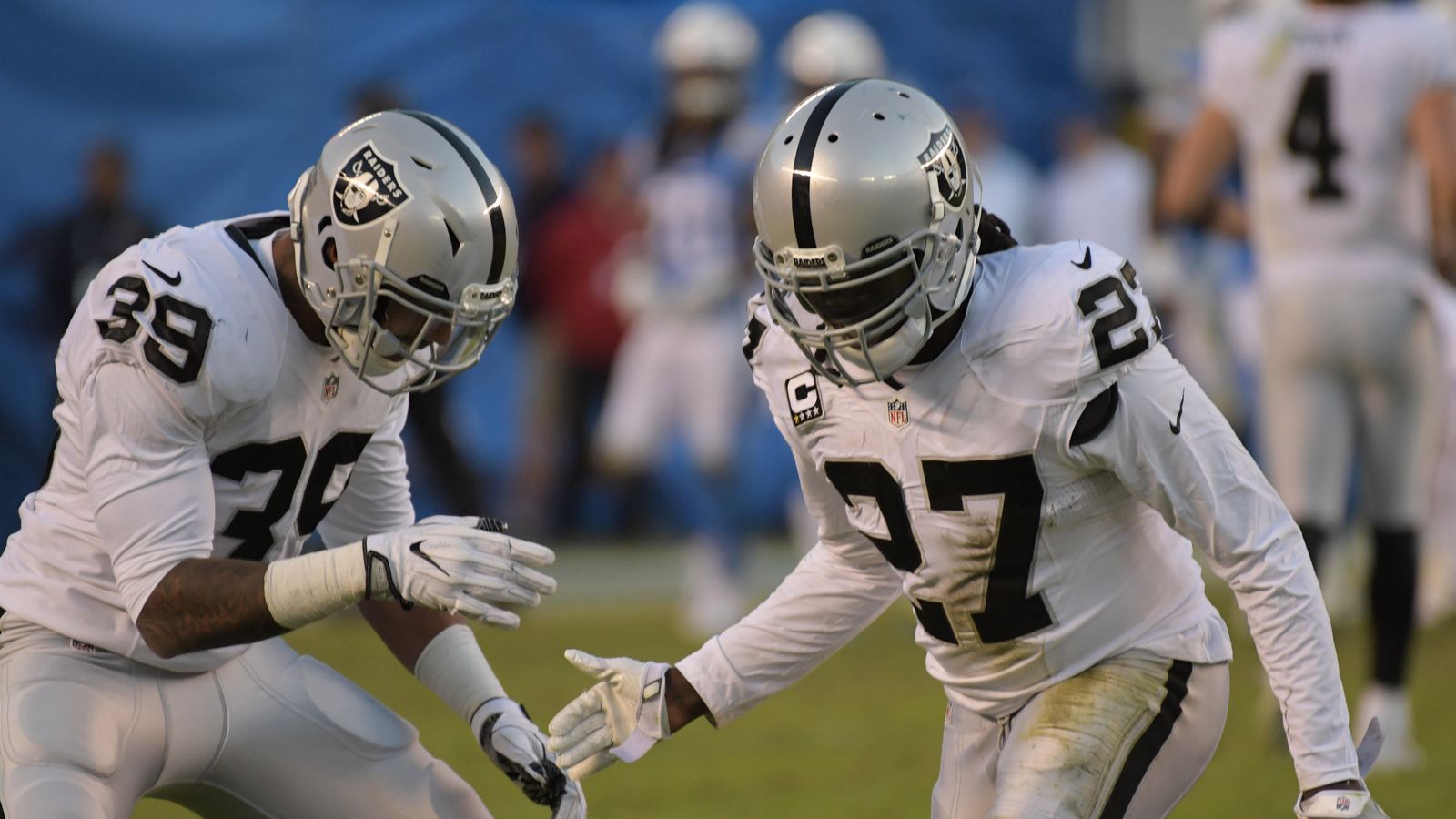 The Steelers lead the AFC North but the Bengals could still play a role in dictating the playoff teams, despite being eliminated from contention.

The Dolphins’ (9-5) remaining games are against the Bills and Patriots. The fate of Miami’s playoff hopes depend on two things. First, can Matt Moore keep playing well in place of the injured Ryan Tannehill? He torched the Jets on Saturday night to get back the No. 6 seed, but everyone has torched the Jets’ secondary this season. The second, can Oakland keep pushing New England for that first seed. The Dolphins don’t have much of a chance against the Patriots, even if it is in Miami, but if the Patriots have the first seed clinched going into the final week they could sit starters. The Dolphins are far from secure as a playoff team.

The Ravens sit right on the outside looking in, but they still have to take care of the Steelers and Bengals.

The Steelers are the more likely Wild Card representative, if they don’t win the AFC North. If Pittsburgh loses to the Ravens, they will drop to 9-6 with a game against the Browns to finish off the season. If the Ravens lose to the Steelers they would fall to 8-7 and would need the Dolphins, Titans and Broncos to lose out. It is just harder for the pieces to fall that way for Baltimore.

The Titans (8-6) are trying to earn their way into the playoffs. The past two weeks they have beaten the Broncos and Chiefs. They finish off the year with the Jaguars and Texans, but in order to get the Wild Card, they’d almost have to win out hoping the Ravens or Steelers finishing with a worse record and the Dolphins finishing with an equal or worse record, since the Titans beat the Dolphins this season.

There are only two weeks left this NFL season, but there is still a lot to be decided.

It is hard to imagine a team not winning one game during an entire season, but here we are with only two games left for the Browns to avoid that mark. The Browns don’t do much well. Against Buffalo they struggled particularly with tackling Tyrod Taylor and LeSean McCoy as well as protecting Robert Griffin III.

The Bills came in struggling on offense, but as they have most of this season, the Browns showed the other offense they could succeed and be productive. It all started with McCoy who had 153 yards on 19 carries with two touchdowns. He really just made it look effortless. Wait, maybe it was the Browns who looked effortless. It was hard to tell.

As for the Browns offense it started okay, but Griffin had almost no time all day long. He did a good job of standing in the pocket and delivering a few passes though. He also had a pretty fun run for a touchdown and didn’t turn the ball over, which is nice. He also somehow ended up being the team’s leading rusher with 58 yards.

Speaking of players leading categories they shouldn’t, Duke Johnson Jr. led the Browns in receptions and yards. To be fair, Johnson is good receiving back, but at some point, you need your receivers and tight ends to contribute in the passing game. Terrelle Pryor Sr. suffered an injury and only mustered up four catches for 19 yards.

The Browns don’t do much well. The thing they do really well is lose. They are the best in the league at that.

During Sunday’s loss Pryor sprained his finger Sunday. He reportedly does have a torn ligament, too, which he’ll try to play through for the next two weeks. He’ll then need to have a surgical procedure after the season is over.

Despite the turnstile at quarterback Pryor, has accumulated 67 receptions, 877 yards, four touchdowns, and two angry corners in Janoris Jenkins and the Bengals’ own Adam Jones.

Pryor is set to be a free agent after the season. He has said he would like to be back with the Browns, and that might have something to do with familiarity with the system, Jackson giving him a second shot, and maybe the Browns having a ton of cap space and the ability and willingness to pay him a few pretty pennies.