Does tanking lead to injuries? The Steelers vs Giants game will provide quite the receiving duel. Baltimore hopes to keep Jay Ajayi from running loose on their defense.

The Ravens and Steelers have intriguing Week 13 games lined up while the Browns are on their bye. The Ravens will be hoping to ensure Jay Ajayi doesn’t get loose on them. The Steelers are looking for their star receiver to do a bit more dancing than the Giants on Sunday. Also, let’s put to bed one of the worst Browns’ takes so far this season.

Ravens CB Jimmy Smith (back) is listed as questionable after full practices all week.... https://t.co/n5l44i6QM6 pic.twitter.com/GaWGRZo7e7

After missing last week’s game against the Bengals, Jimmy Smith was a full participant in practice. He’ll be needed as Jarvis Landry and the Dolphins receivers are on their way to Baltimore to test their pass defense.

Alex Lewis is a big loss for an offensive line that has struggled with injuries. His presence is mostly injury insurance, but he has played well when called upon this season. His absence may come into play even if a lineman needs a breather or a play off with Ndamukong Suh and the Dolphins intense pass rush trying to put the pressure on Joe Flacco.

One player is largely responsible for the resurgence of the Dolphins, and that is Ajayi. He ran so well that the loss of Arian Foster, who decided to retire mid-season, is hardly being felt.

Ajayi had his troubles starting the season, and he didn’t make the trip to the first game as punishment for his public frustration with his role. Even when he returned to the team, he had a clearly defined backup role. He didn’t more than 10 carries until Week 5, his first start in place of Foster. It was Week 6 where he exploded on the scene with a 200 yard performance in a win over the Steelers. That began a stretch of three games where he totaled over 500 rushing yards and four touchdowns. Since Week 9 he has not been able to top 100 yards. Last week he had 45 rushing yards with a 2.5 yard per carry average. He’s looking to get back on track, but the Ravens defense isn’t exactly going to make that easy. 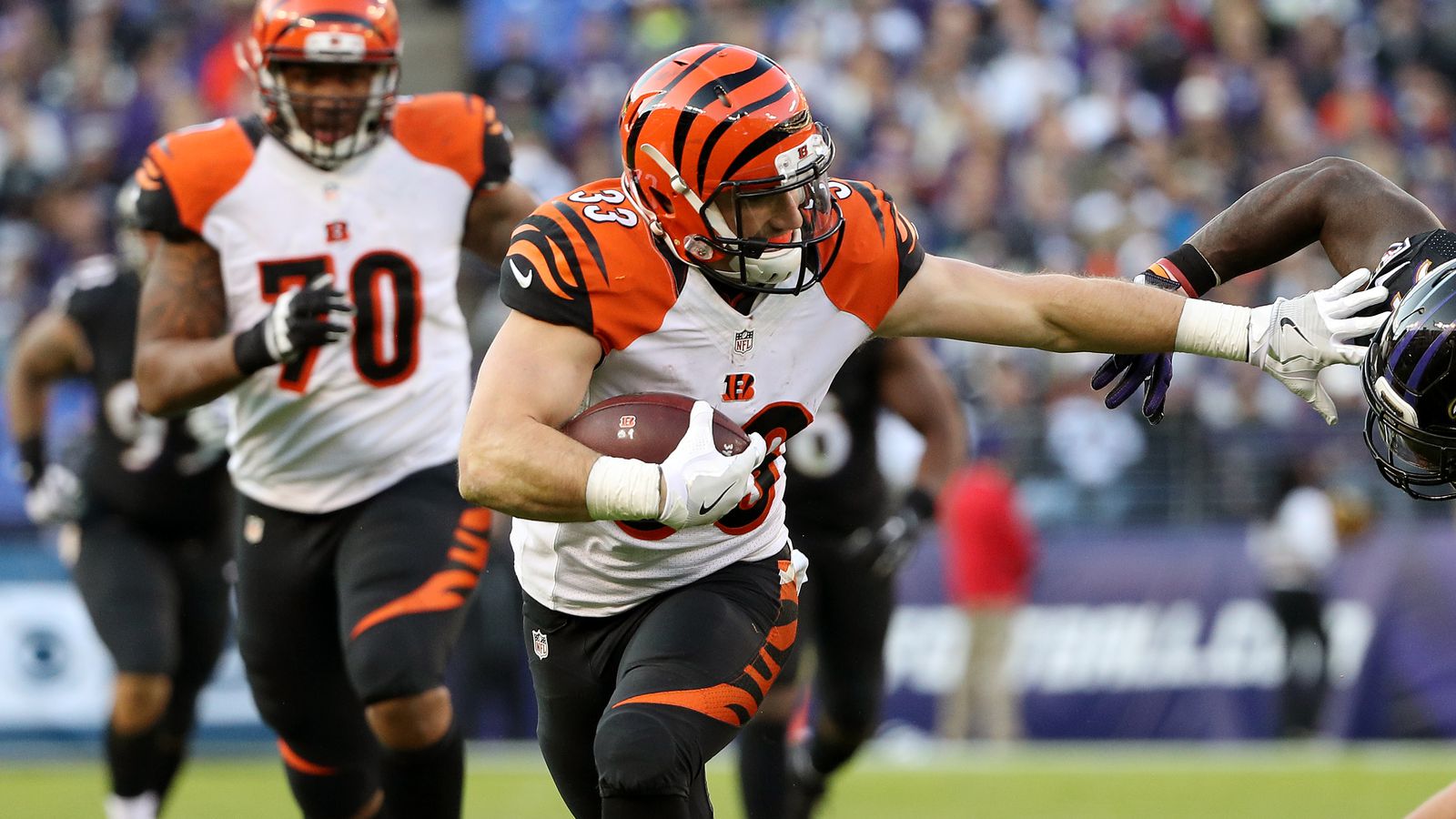 This game is essentially a pick ‘em in the eyes of the experts. 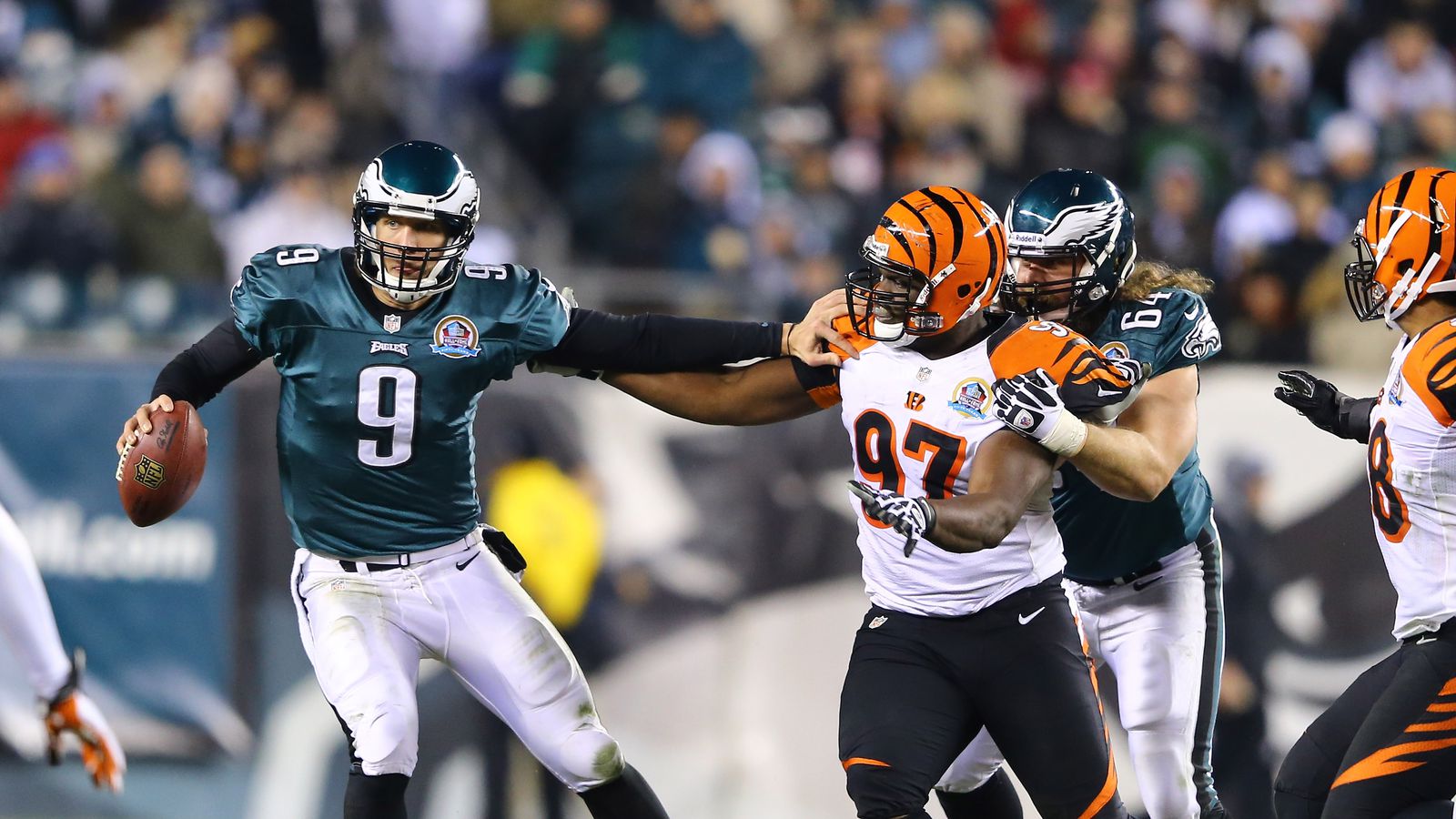 Bengals need to win in the trenches to beat the Eagles

Both the Bengals and Eagles have loads of talent and some key struggles on both their offensive and defensive lines. As a result, the winner of the battle in the trenches will surely have a strong advantage throughout the game.

The Ravens rushing defense is the best in the league, only allowing runners 74.9 yards per game. Led by Timmy Jernigan and C.J. Mosley the Ravens’ rushing defense has been determined to force teams to become one dimensional (like their offense). It has been a mixed bag as the Ravens are sitting at 6-5.

If Ajayi can’t get back on track, the Ravens shouldn’t have much trouble coasting to another win and putting the pressure on the Steelers to keep up for the division crown.

Which wide out will put on a bigger show?

The NFL will be treated to quite the matchup on Sunday when two of the best receivers currently playing will be facing pretty forgiving secondaries. It could lead to some real fireworks. Odell Beckham Jr. and Antonio Brown have been putting on shows for quite a few years now. Now they get to fill a highlight reel together.

Coincidentally both receivers had rough starts to the season. Brown was held to 39 yards twice to open the season, and he was struggling at times with the double and even triple coverage that he was facing. He has stormed back though, and he is near the top of all the major receiving statistics.

Beckham went scoreless until Week 5. Coincidentally enough, that is the last time the Giants lost. Since then, Beckham has been held scoreless only twice.

While they’re not matched up against each other, I’m sure fans won’t mind watching them compete on Sunday, and the dances that are sure to take place.

The Steelers remain relatively healthy heading into Week 13 of the season. The only major question mark is offensive lineman David DeCastro’s status on Sunday. Even that isn’t really in question. DeCastro missed practice with an illness.

It isn’t clear what the issue was exactly, but it is flu season. At this point in the season, the Steelers probably told Decastro to take a veteran day and eat some soup while he recovers for Sunday’s game against the Giants.

Seriously? This is a take that exists. I get the line of logic that gets you to this point, but it isn’t right. The main citation for this take is Cody Kessler getting hurt so much. He has experienced several concussions this season due to the hits he has taken. I get it. The Browns have a really bad offensive line, that leads to the quarterback being under more pressure and the player’s health being at stake.

But that doesn’t prove tanking is the cause. Andy Dalton has taken so many hits this season, and hasn’t even missed a drive. Kessler has actually been sacked less than 20 other quarterbacks in the league. Dalton is the second most sacked quarterback, tied with Carson Palmer and only behind Andrew Luck... Hmm, no wonder all three of those offenses have had trouble this year.

The Browns don’t have durable quarterbacks and they do have a bad offensive line. That gives the illusion of this theory, but it isn’t true.

I’m not sure what causes a take like this to happen. Did someone need a story for the Browns’ bye week? There are plenty of compelling stories like tracking how young players have progressed. Even speculating which free agent or rookie quarterback the Browns will sign this offseason is pretty good click bait. Maybe it was made up by someone who just hates tanking. I can get that. You don’t want to hear team officials literally say they don’t care about this season. However, to try and put the blame for injured players on them is an unfair accusation. And, also, the Browns are hardly tanking. They’re just bad.

Plain and simple the Browns were a horrible team going into the offseason. No matter how that offseason shook out they weren’t going to be climbing out of any gutters. The new regime decided to plan for the future and drafted a bunch of rookies. They even acquired several additional picks for next season.

The Browns might not be intentionally tanking but this season was part of what they hope to be a long-term rebuild of their franchise and roster. It is frustrating to watch as it plays out in real-time, but the Browns could be reaping the rewards in a few years.