The Bengals continued their trend this week of solid defensive play, but they actually managed to put together a really good total team win as the offense finally got things going.

It has been a rough season for the Cincinnati Bengals in 2016. Throughout much of the season, the team has sported decent defensive play paired with lackluster offensive play, or decent offensive play coupled with poor defensive play. On Sunday, we finally saw the offense and defense clicking at the same time. Since the Bengals failed to capitalize on a weak AFC North, any realistic hopes for a playoff berth are gone. So, as good as this win was, it came a bit too late to matter much. As a result, these final four games feel like nothing more than glorified preseason games, at least in terms of importance to the playoffs.

Still, it would be a shame if we ignored just how well certain members of the Bengals played this week. The offense graded notably well in this week’s grades from Pro Football Focus, led by Andy Dalton (89.7), Andrew Whitworth (81.9), Kevin Zeitler (79.8), Brandon LaFell (77.9), and Jeremy Hill (75.2). It’s the first time since Week 8 when the Bengals tied the Redskins in London that multiple Bengals players received above average grades or better.

The story of the week was the fact that the Bengals’ offense finally got things going, after a poor four game stretch, but we shouldn’t gloss over the fact that the Bengals’ defense looked solid for yet another week. Geno Atkins (85.8) led the group, but the team also saw very good performances out of Carlos Dunlap (84.8), Vontaze Burfict (83.1), Darqueze Dennard (79.6), and Pat Sims (79.5). It’s surprising and enjoyable to see Dennard and Sims among that group, while expected for Atkins, Dunlap and Burfict.

It was awesome to see Dalton playing so well, and a lot of that had to do with the fact that his offensive line actually protected him really well for what feels like the first time all season. He wasn’t sacked once (a first this season) and was rarely pressured, thanks in part to a fantastic performance from Andrew Whitworth, who earned a very good pass protection grade (82.6) due to not allowing any pressures.

Things didn’t improve much at right tackle, despite Cedric Ogbuehi being benched. But, the play from Eric Winston and Jake Fisher was enough to allow Dalton the time he needed in the pocket to put up 23 completions on 31 attempts for 332 yards and two touchdowns.

What is particularly impressive is the Bengals managed all of the offensive production they had without A.J. Green and Giovani Bernard, and with Tyler Eifert struggling for much of the game. Eifert did manage to record a decent receiving grade (75.6) for his two catches on two targets and a touchdown. But, he was undisciplined with two false start penalties and a poor run blocking performance. Those issues caused his overall performance to suffer.

Regardless of Eifert’s issues as a run blocker, Jeremy Hill (75.2) managed to put together a decent game due to forcing two missed tackles and creating his own running holes. He only managed 1.4 yards per run, but with a touchdown to boot, he was still impressive.

The Bengals’ defensive line was mostly good this week, seeing stellar performances from Carlos Dunlap and Geno Atkins. Atkins recorded a defense-leading performance despite not registering a single sack, but he was constantly in Carson Wentz’s face with two QB hits and four QB hurries. Atkins was also facing consistent double teams all game, which helped Dunlap. Speak of, Dunlap did record a sack in addition to two QB hits, three QB hurries, and three pass deflections. Dunlap leads all defensive ends in pass deflections with 14 and ranks sixth overall in the category in the league. 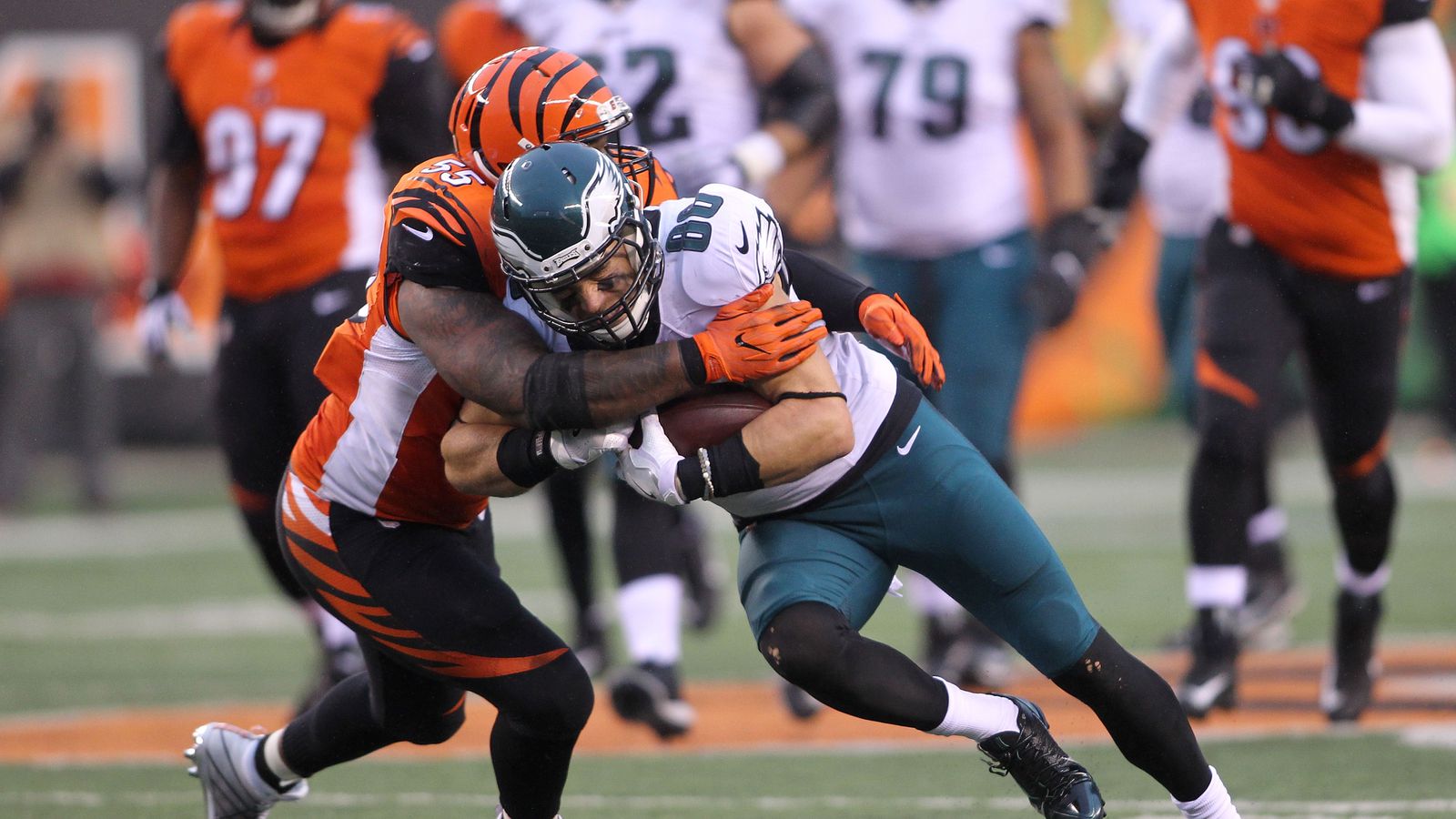 The (inter)national media reacts to the Bengals’ big win at home over the Eagles that really needed to come much earlier in the season. 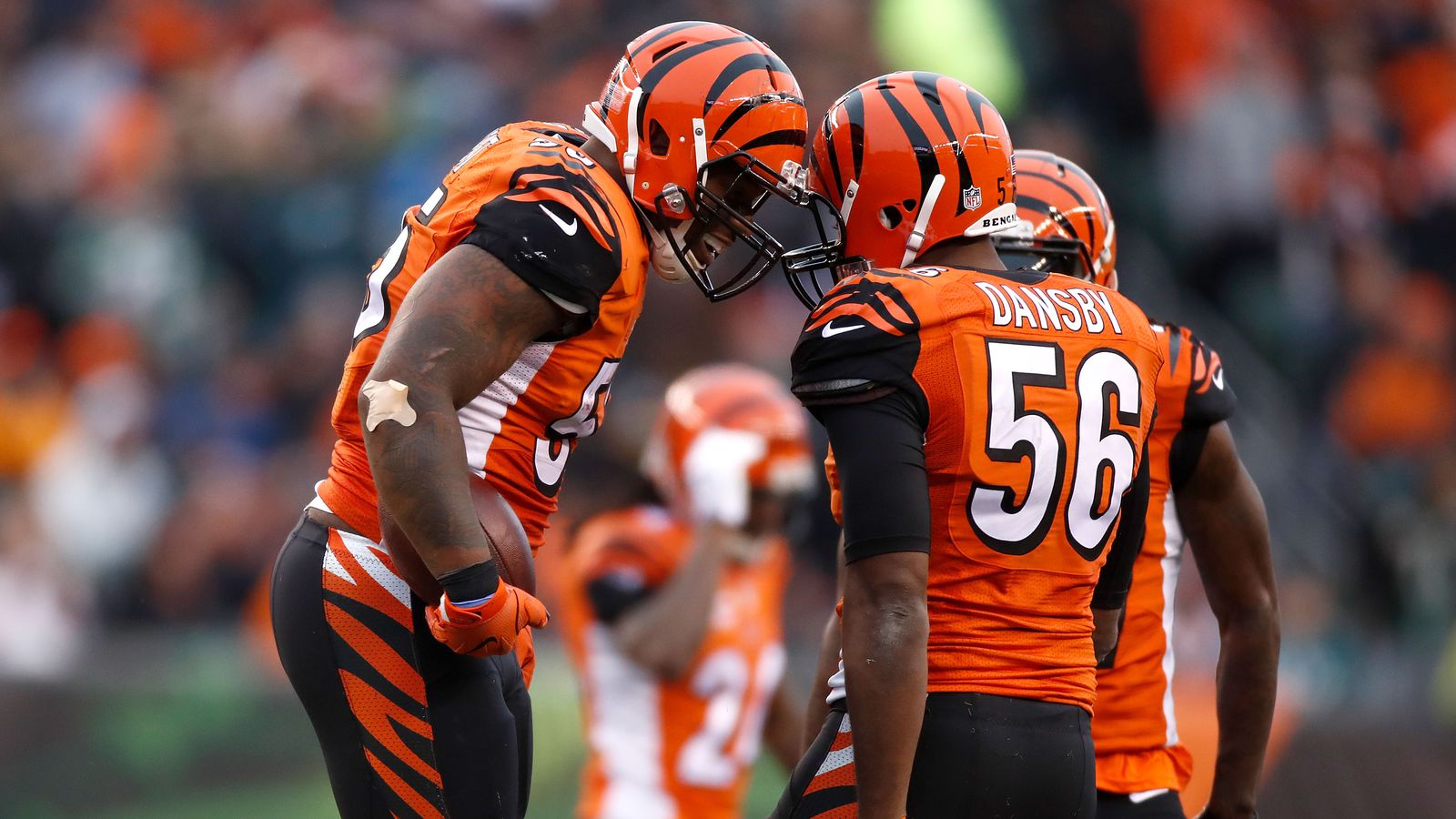 One player who has been playing very well this season (when not suspended) is Vontaze Burfict. He put together another solid performance this week (83.1) due to 15 tackles, two run stops, two interceptions, and only allowing 6.1 yards per reception when targeted. Only three linebackers across the entire NFL graded higher than him this week.

Here’s an interesting statistic: despite the criticism and a few issues in coverage this year, Shawn Williams is currently carrying a solid overall grade (78.5). That grade is higher than Reggie Nelson’s this year with the Raiders (77.0), which shows that the Bengals probably made a good decision by going with the young player who has potential to develop, rather than the veteran who performed well in 2015.