Though the 2015 first round pick has struggled mightily this year, the Bengals seem determined to bring out his long-term potential.

There are many reasons to explain the Cincinnati Bengals’ disappointing 4-7-1 record this year, and none might be more obvious than the offensive line struggles. One player who has had the most troubles in the unit is second-year tackle Cedric Ogbuehi.

The 2015 first round pick was handed the starting right tackle spot once Andre Smith bolted to Minnesota and he’s been one of the NFL’s worst players at his position this season. Even so, the Bengals’ coaching staff is determined to get him back on track. That started with getting benched last week and not playing one snap against the Eagles. Now, the Bengals and giving Ogbuehi work at left tackle in practice, as well as continued reps on the right.

Per Geoff Hobson at Bengals.com, offensive line coach Paul Alexander believes Ogbuehi projects to a better left tackle prospect than on the right. It’s an easy proclamation after his many struggles on the right, but it does harken back to the long-term plan at tackle when they took Ogbuehi and Jake Fisher in back-to-back rounds last year.

Cedric Ogbuehi is probably a more natural left tackle, he said, and at some point we’ll see him before the end of this season even though he was benched at right tackle for Sunday’s 32-14 victory over the Eagles.

Speaking of Fisher, he and Eric Winston replaced Ogbuehi in the team’s 32-14 win against the Eagles last Sunday. Even though a rotation began to surface between Ogbuehi and Winston since the middle of the year, Ogbuehi was essentially demoted in Week 13. But while Alexander isn’t prepared to hang up the towel on the Ogbuehi-at-right-tackle experiment, he is also planning to get Ogbuehi reps at left tackle sometime this year.

If that’s the case, it brings up an interesting situation with Andrew Whitworth, the team’s current starting left tackle. Recently, Whitworth reiterated his desire to stay with Cincinnati in 2017, which would come with a starting role at 35-years-old. So, it becomes an issue of whether the team wants to look to the future and roll the dice with Fisher and Ogbuehi, or whether they want a Whitworth band-aid for one more year. 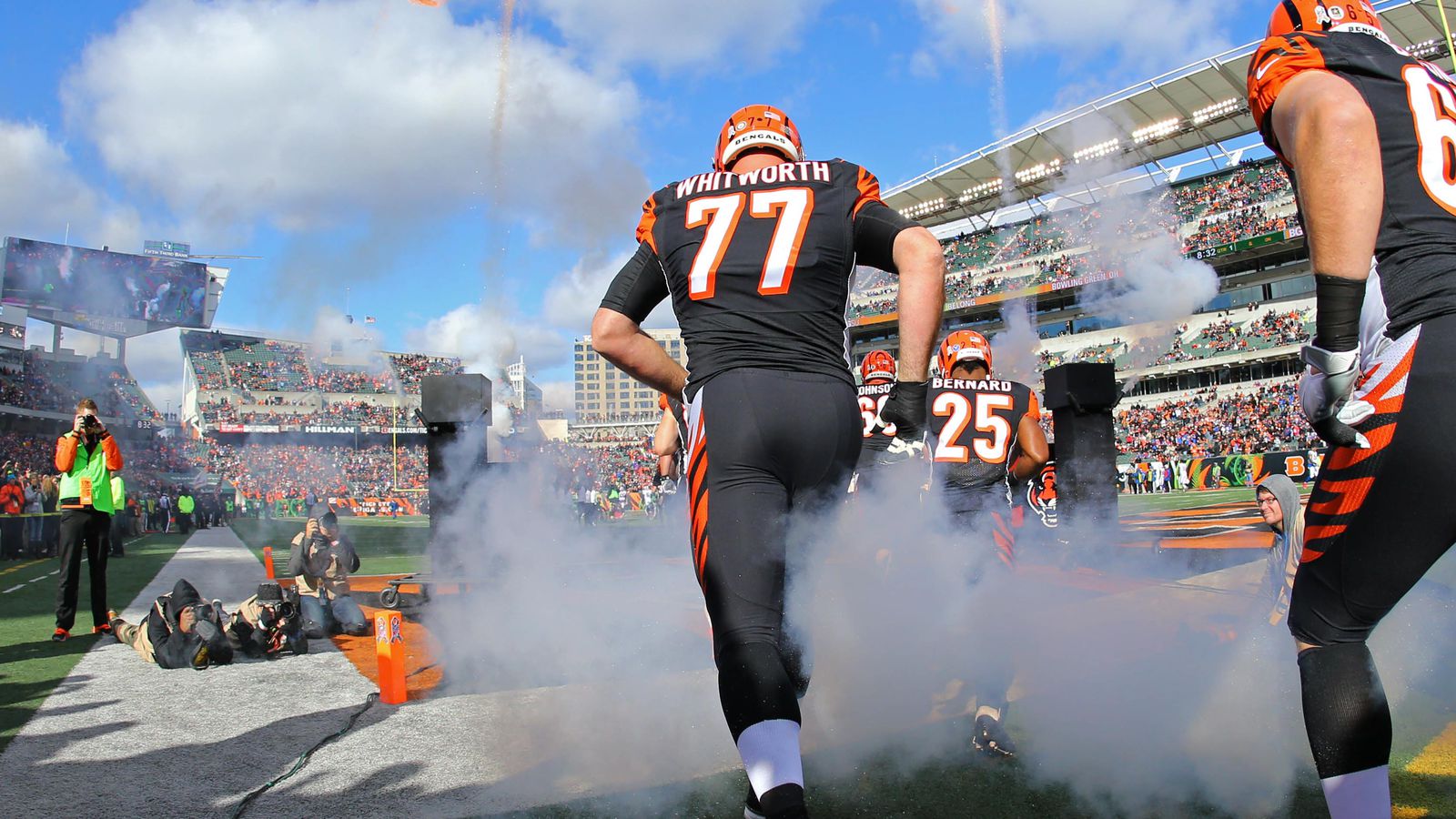 Andrew Whitworth hopes to remain with Bengals in 2017

In a season that’s been full of painful lows and gut-wrenching losses, just hearing Andrew Whitworth say he plans to play in 2017 is music to Bengals fans’ ears.

Alexander did note that the possible in-game snaps to Ogbuehi at left tackle won’t determine Whitworth’s status for the future, but it does show the Bengals’ forward thinking. These limited snaps at left tackle during the next few games might show the team a different look from Ogbuehi than what we’ve seen from him on the right side.

The grizzled offensive line coach also was non-committal when it came to who would be starting at right tackle against the Browns.

“We’re just trying to get through Sunday,” Alexander said, via Hobson.

Regardless, the Bengals appear to be committed to Ogbuehi and Fisher as their bookend tackles for the next handful of years. Whether more snaps is the key for future success is yet to be determined, but it seems as if the team wants to see more from the young duo to get a grasp on the outlook of their future.

Update: Ogbuehi has officially been moved to left tackle, as the backup there.

Cedric Ogbuehi says he has been moved to left tackle for #Bengals + feels much more comfortable back at his natural position. Still a backup

Ced remains upbeat even with Whit entrenched in front of him. says a load off his mind to be back at LT