The NFL Network continues to countdown the top 100 to ever play the game as they add names to the Wall of 100 of the best to ever play. This episode features the safety position. The position has always been a fan favorite as he assumed the role of enforcer for our favorite team.

The safety position is a crowded class of the greats. It is a position that was important from the first days of the NFL all the way to today. There have been many greats to play & many dominated the middle of the field for many years. In the early days, they provided the last hope for the defense to prevent a big play. They also were effective as administering vicious hits & act as intimidators. The game has removed violence from the tool belt of the safety, but their importance is still important.

No matter whom you call your favorite team, the name of an opponents safety was on everybody's lips. Their reputation was known to fans across the country. The safety position is an important position as he makes many of the defensive calls & can provide momentum turning plays with a forced fumble, an INT or a bone crushing tackles. As you read this the images of those safeties dances through your head waiting to hear their name mentioned. Well, wait no moore, the following 14 finalists await to hear threat name added to the final list & added to the Wall of 100!

Six will hear their name called, the question will be do you agree? 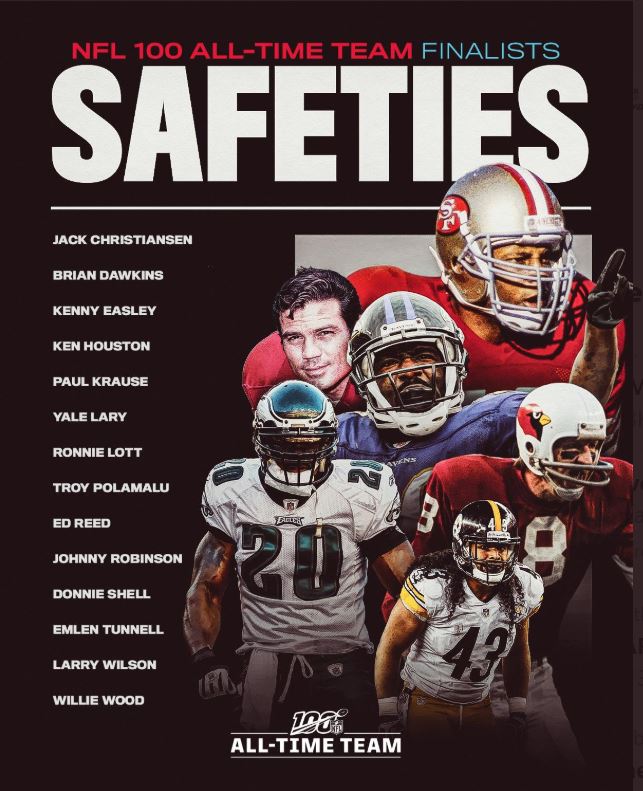