What happened to the Bengals’ defense at the end of each half on Sunday?

After tying the Eagles last weekend, the Bengals are now 0-10-1 in one-score games under head coach Zac Taylor.

Each game is unique and there are a variety of reasons for any loss, but there was one aspect of this game that would have made a huge difference: two-minute defense.

The Bengals defense only allowed two touchdowns, but each came in the closing minutes of the half.

End of the first half

After an Eagles field goal put them up 6-3, the Bengals’ offense responded by driving down the field for their first touchdown of the day. This connection between Joe Burrow and Tee Higgins was the first of two times the duo hooked up for a score on the day and hopefully the 1st of many times they will do so over the next several years.

This gave the Bengals a 10-6 lead with less than two minutes to play in the half.

The Bengals defense was understandably thinking “pass” when they called this defense, but as teams often do, the Eagles started the two-minute drive off with a run.

The Bengals have both defensive tackles in the B-gap which can be an effective way of creating one-on-one pass rush matchups, but unfortunately it is terribly unsound against the run.

The Eagles get their blocks and open up a huge running lane for Miles Sanders who starts off the drive with a 19-yard run.

This puts the Eagles at the Bengals’ 41-yard line, which is already in fringe range for kicker Jake Elliott.

The Eagles went no huddle and the Bengals did not get lined up fast enough. They were still getting in position as the ball was snapped.

To make matters worse, linebacker Akeem Davis-Gaither’s first steps were to his left, away from the three-receiver side.

This gave the Eagles a window for an easy completion and 10 more yards.

On the following play William Jackson was playing loose man and Eagles quarterback Carson Wentz once again took the easy completion. He threw a quick hitch to John Hightower who Jackson quickly tackled in-bounds for a gain of eight yards.

Given the situation this is a good play for Jackson. He was in man coverage and was more concerned with getting beat for a touchdown than he was with the short throw. As a result he played loose on top of the receiver. He made the tackle and kept the receiver in-bounds. At this point in the game, the time the Eagles lost wasn’t worth the eight yards the gained.

Besides, the Bengals took most of those yards back on the very next play.

Carl Lawson had an excellent day and stepped up at the right time here.

On the left of the screen, you can see how quickly Lawson gets off the ball. He gets a great push with his signature strong inside arm. Then he comes inside for the sack on Carson Wentz, who Wentz, whofumbles.

This could have been a huge play if a Bengal defender was able to fall on the ball, but it was still a very good play, forcing third down.

The Bengals just needed to hold them for one more play.

Then came this play. Some people described this defense as an inverted Cover 2, but that’s not entirely accurate.

The cornerbacks are playing Cover 2 as is the free safety who plays the deep half on the bottom of the screen. What makes this different is that slot cornerback Mackensie Alexander plays the other deep half.

I like this defense for its ability to disguise Cover 2 as Cover 1, which the Bengals play a lot of, but what I really like about it is its use of personnel.

Vonn Bell is a good player, but struggles in deep field zones. In the traditional Cover 2, he would be responsible for a deep half. This defense avoids that, by having Alexander take the deep half and making Bell the Tampa dropper in the middle of the field. Essentially, he plays the role that the Mike linebacker normally plays in Tampa 2.

The Bengals are disguising Cover 1, so Alexander is rocked down and moving with the receiver in motion. The motion could have thrown him off, but it should have actually helped him. It gave him an excuse to move and gain depth without giving up the disguise.

He is responsible for the deep half, which means he has to be able to cover the seam and the fade. It is smart for him to play over the top of the seam, because that is the faster and easier throw for the quarterback. What gets him in trouble is at the 15-yard line when he turns his hips inside.

This puts him out of position to play the fade and ironically the receiver cuts outside anyway.

Remember this is not a pure Cover 2, it is a form of Tampa 2. Bell is dropping inside and if the receiver turned suddenly to the post or dig route, he would be right underneath it. There is no reason for Alexander to turn inside.

While the quarterback can zip the ball to the seam route, the fade requires him to put more air underneath it. This along with underneath help he should be getting from cornerback Darius Phillips is why in Cover 2 the deep middle field player should favor the seam threat over the fade threat.

As a general rule in zone coverage, you cover deeper routes and rally to tackle shorter routes. Additionally, it’s third-and-eight, so no one should care if they throw a short pass as long as the defense comes up and makes the tackle, like Jackson did earlier in the drive.

After jamming the receiver he should continue to drop underneath his route, but instead he jumps the five-yard flat route.

The quarterback is already throwing the ball at this point. Although Phillips turned his back to him to jam the receiver, it appears that he gets his eyes back to Wentz. Unfortunately he misreads the shoulder and thinks the pass is coming underneath.

Another issue I take with Phillips here is that he jams the receiver to the outside. If he could have forced an inside release, this would have helped Bell out by pushing him closer to the other threats to the deep half. 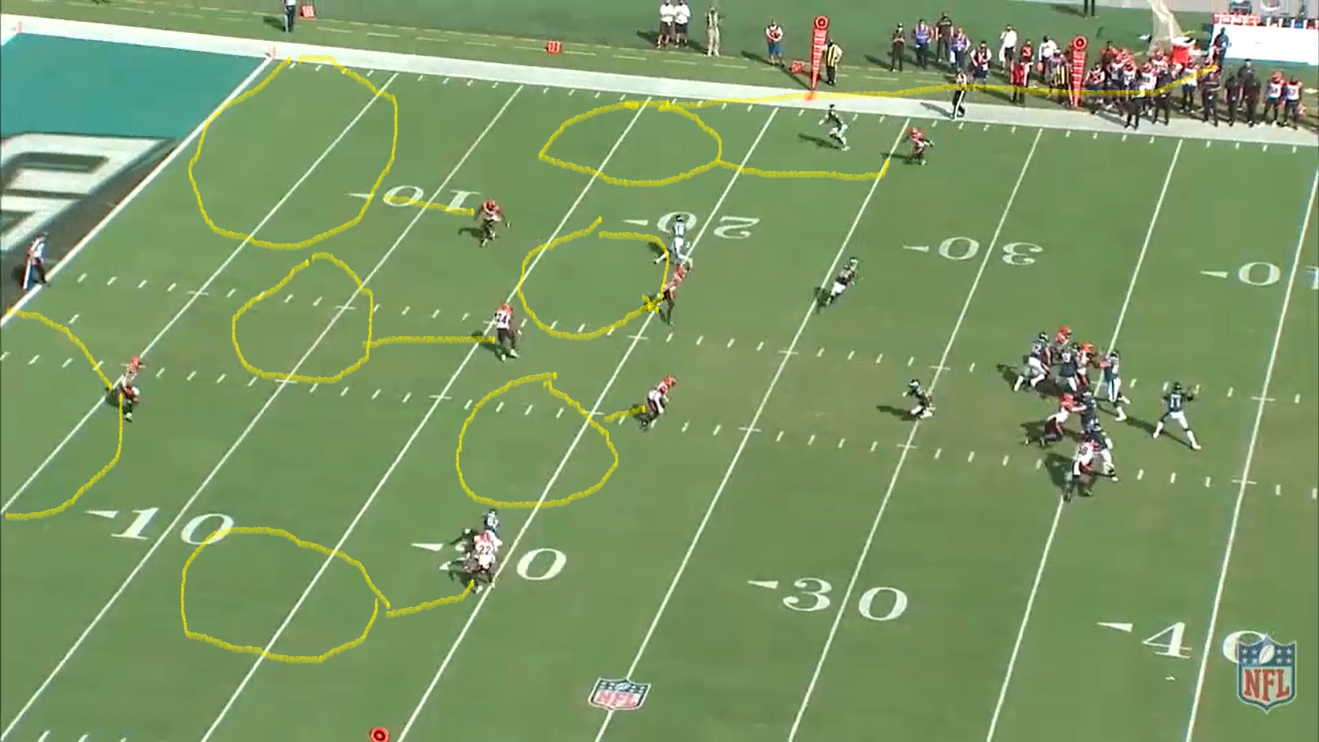 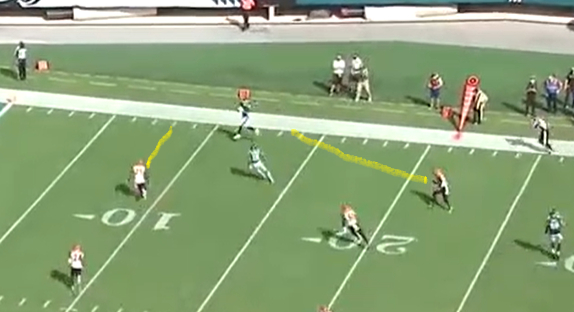 Alexander can sit on the seam until he see the quarterback going to the fade (or in this case the seam breaks off). Then he should turn and run over the top of the fade route. The problem is that he turns his hips the other direction so he cannot get out to the fade quickly enough.

Phillips should jam the receiver inside, then drop under the fade and only break on the out late. This is particularly true given the situation of third-and-long with less than a minute in the half.

With Alexander over the top and Phillips underneath the receiver would be bracketed, making a very tight window for Wentz to try to get the completion. Instead, both were out of position which makes it an easy pitch and catch for the score.

Late in the 1st half, the Bengals strung some bad plays together and it started with the kickoff out of bounds.

With Jackson’s tackle and Lawson’s sack they started to string together some good plays, but they could not close out the drive on third down.

End of the second half

With just over three minutes to play, the Bengals extended their league to seven points with a Bullock field goal. Following a touchback, the Eagles took possession at their own 25-yard line.

After a tackle for a loss by Germaine Pratt on 1st Down, the Eagles faced second-and-12.

The Eagles drew a pass interference call on this play. There is certainly contact, but it seems to be going both ways and I’d say Jackson got the worst of it.

I get the call, but to me it should be off-setting.

If they held on to the flag, this would have put the Eagles in a third-and-extra long situation and given the Bengals a chance at setting up forth down.

I am not one to complain about penalties and I was trying really hard NOT to on the previous clip, but the gloves are coming off here.

After completing a short pass on 1st Down, the Eagles faced second-and-four. They ran a hitch-and-go. The intent of which is to get the cornerback to bite on the hitch, so the receiver can run a go route past him.

Phillips bites on the hitch, then the receiver runs into him.

Seriously, look at Hightower lowering his shoulder. He is clearly initiating contact.

If anything, Phillips looks like he is catching him and absorbing the impact. To be fair, he gives Hightower a little push at the end, but the scheme and the receiver created the contact.

I don’t know how you make that call on a hitch-n-go. Once again, a potential third down becomes a first down.

On the next play, they completed a slant against man coverage for an 11-yard gain.

The Bengals played a lot of Cover 1 in this game. Man coverage has its advantages, but it also has its drawbacks.

One drawback is that it puts such a strong emphasis on one-on-one matchups, that a single mistake can easily lead to a score. The Bengals played 91 snaps of defense in this game. Say what you will about the Eagles weapons, but imagine trying to cover anyone man-to-man 91 times. You have to change it up.

The other issue is the quarterback. In zone all eyes are on the quarterback, so if he scrambles, the linebackers and defensive backs know it. In Man everyone is focused on their man, so if the quarterback takes off, he could be running for a while.

In this clip, the Bengals are in Cover 1 and the coverage is very good.

Sam Hubbard, who is the tackle on this play, spins back to the B-gap as Wentz starts to scramble. For the second time of the day, Wentz narrowly escapes Hubbard’s grasp to avoid the sack.

Wentz is eventually tackled, but only after gaining nine yards and a first down.

This put them in the red zone where they soon found themselves with a third down again. This time it was third-and-short and Wentz quickly threw the arrow route to move the chains.

A play later, the Eagles were in second-and-goal on the seven-yard line.

The coverage is sound and the pass rush is quickly on Wentz. He barely escapes the collapsing pocket as Carlos Dunlap desperately reaches for him.

Hubbard shows great effort, attempting to run him down, but it is no use. Wentz scores.

Once again, the Bengals were in man coverage, so the linebackers and defensive backs were not looking at the quarterback and as a result they were slow to react to the run.

This would be the last score of the game, which finished in a tie following overtime.

In short, the Bengals need to do a better job in two-minute situations defensively. This is a critical in-game situation and must be a point of emphasis for defensive coordinator Lou Anarumo in practice this week.