Due to word limits and constraints on the number of images you can link per post, I'm having to break this up into a 3-part series. Refer to Part 1 here LINK for the explanation on the process I'm using for this exercise as well as the DL breakdown, and to Part 3 here LINK for the DB grading. 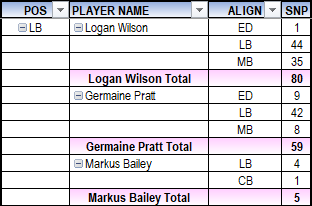 First topic of discussion here is who plays Mike. Wilson lined up with some kind of shade on the C in nearly 50% of his snaps (44% to be exact), while Pratt saw that same alignment only 10% of the time. An interesting note was Pratt lining up as a true stand-up Edge with Wilson as the sole off-ball LB. This was something that I'm sure was related to losing Trey on top of Jobi and Daniels, but I have seen them use this alignment in prior games so that's not the only explanation. I actually wish they would do this more often - I've soapbox'd on here before how the Pats used to use a 5-1 system like this a few years ago and the ability to be multiple with your personnel creates matchup issues for the offense. Having an Edge who can slide inside and play 5T against the run gives you odd/even flexibility. And then having a LB who can slide out and play ED and be capable enough as a pass rusher and run defender against TEs and OTs, while also being able to drop into coverage, is a huge bonus as well. Pratt is playing that latter role 9 times in this game, and while he isn't the prototype say a Dont'a Hightower is from that spot, he's still functional and I like the scheme flexibility it gives us.

Bailey was only on the field 5 times and all came in subpackage sets. In obvious passing situations we would sub off Pratt for either Bailey (still nickel but with better coverage) or Flowers (dime and have Flowers match up on Waller), or sometimes both with Flowers replacing Pratt and Bailey replacing a DT.

You can also already tell just how much time we spent in subpackages because Wilson played all 80 snaps but Pratt was off the field for 21. What I noticed in terms of trends was, we went to Dime/Flowers in between the 20s because his athleticism helped cover Waller in the open field. But when the Raiders got in the red area we kept Pratt on the field even in obvious passing situations, like the end of the 1st half and the last drive of the game where he made the INT. I'm guessing the logic is, with space reduced in the red area, Flower's speed isn't needed to man up Waller, and Pratt is better for playing zone in tight quarters? I know we played A LOT of man in obvious passing situations, rotating between a lot of 2-Man and Cover-1 Robber, where all 5 guys underneath played Man (with Flowers on Waller and Wilson on the RB) and the only difference was whether we were 2-deep or whether a safety dropped down to play a Robber zone in the underneath area. But we didn't do that in the red zone, instead defaulting back to more of our regular zone looks and I think the team prefers Pratt over Flowers for that.

Pratt had some very good plays in this one but also makes more mistakes than Wilson. Pratt's Win Rate was better (36% to 21%), but his Loss Rate was also worse (28% vs 14%). Wilson is better with his gap assignments, but I distinctly remember that one time where Pratt aggressively shot the A gap and made a TFL and earned a +3, the only such +3 for ANY player for run defense on the day. He definitely moves better than Wilson, but I also noticed he tends to get tunnel vision when in zone looks instead of getting his head around to see where routes are being run around and behind him. But overall he graded pretty well in coverage, and the +4 he got for the INT to end the game obviously helped. Wilson definitely has his limitations in coverage right now, most obviously evident when the Raiders went to 12 personnel late in the game we would stick to nickel personnel and have either Hilton or Bates manning up on 6'4 TE Foster Moreau while Wilson would still just cover the RB. If they don't trust Wilson with anything more than LBs in man, that's not a good sign. And we'll get into that more with this next chart.

The main thing to focus on here is the coverage responsibilities. Wilson played Man a total of 15 times on the day (counting snaps when he wasn't Active as well), but 12 of those came with him being assigned to the RB. Only 3 times on the day did he cover a TE in man. That's fine if the TE1 is Waller in 11 personnel because Waller is a beast, but backup Foster Moreau played 27 snaps with 17 on pass plays, and they only trust Wilson to man up a mediocre TE2 like him 3 times? Not encouraging to say the least.

In terms of the Man/Zone split, I had Wilson playing some kind of Zone on 43 snaps compared to 15 in Man. He was sometimes used in an underneath Rat/Hole defender zone while everyone else played Man, but for the most part when Wilson was in Zone it means the whole defense was as we played a lot of 2-Man in our 2-minute defense. As noted he was "good" in coverage when manning an RB, but struggled a bit in Short Zone with a Loss Rate of nearly 50%. Deep Zone for Wilson means dropping deep from his MLB spot in Tampa-2 to play a mock Centerfield role between the two safeties - he was rarely tested in this role.

Pratt also wasn't asked to do much more than cover RBs in Man and play Short Zone. He was actually a bit better in Short Zone, but again the +4 on his game-winning INT helped that average a tick. But I do think he looked better in Man on a RB than Wilson did - he's more athletic and moves better in space. His weakness as I mentioned earlier is to get a bit of tunnel vision when zone dropping, which didn't hurt him in this game but definitely could in others. He also had a couple good pass rushes mixed in, and definitely looks better than Wilson in that regard.

Bailey was in coverage for all 5 of his snaps but only active for 3, once in Man and twice in Short Zone. One thing I noticed that I mentioned elsewhere is that there were a few times where we matched up against Trips WRs with all our CBs on the WRs and Bates covering Waller on as the backside X receiver. This is usually a huge screaming tell for Man coverage, but I believe in most if not all cases we zone-dropped from this into a Tampa-2 shell with Bates playing underneath at the CB position and I think Hilton dropping into the other deep half zone. BUT, to completely go in the face of that, there was one instance where Bailey lined up at the CB position across from a split out RB. Again this is usually a huge tell for Man, and unlike the prior examples, in this case we did play Man. So my guess here is, Bates is good enough and smart enough that they trust him to play some CB in Cover-2 whereas they wouldn't trust Bailey with that kind of responsibility. It also tells you what they think of Hilton, if he was indeed the one dropping deep on the other side. Guys who can play multiple roles in like that gives Lou the ability to really disguise coverages.

All that said, Bailey wasn't asked to do much in this game with only 5 snaps because they spent most of their subpackage looks in Dime with Flowers marking up on Waller. These are usually the situations where Bailey would enter the game for Pratt, as he offers them a little more in the passing game.