Back again. Due to word limits and constraints on the number of images you can link per post, I'm having to break this up into a 3-part series. Refer to Part 1 here LINK for the explanation on the process I'm using for this exercise as well as the DL breakdown, and to Part 2 here LINK for the LB grading. 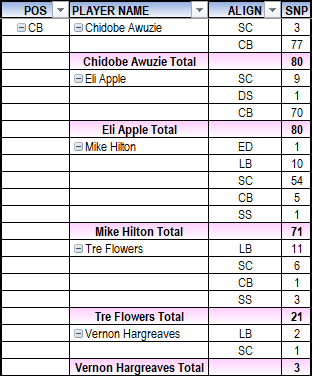 Not much to notice here, because we already know both Chido and Apple rarely ever play in the slot. But it is interesting to note that they did stay in nickel several times the Raiders went to 12 personnel and kept Hilton in as a pseudo LB. I noted in Part 2 how it seems the team didn't like having Wilson man-up on TE2 Moreau, so sometimes they kept Hilton in the game for that reason?

A side note here to explain the different positional nomenclature. A CB simply refers to a boundary DB lined up in any capacity, I don't care if they're over a WR or in zone over a TE with no WRs to their side. If there was a 2nd DB lined up to the same side as a CB, like say Hilton or Bell, then they could have 1 of 4 possible tags depending on alignment. If they were aligned over a slot WR, that's easy they're tagged as a slot corner (SC). If there isn't a slot WR then it defaults to one of the other 3, depending on depth. If they are 3-5 or so yards off the ball then they get tagged just like a regular LB. If they are deeper than that, like 8-10yds, then they become a strong safety (SS). And conversely if they are really pressed up to the LOS then I could tag them as a true Edge defender (ED). So that is why you see a lot of different tags for Hilton but basically just CB and SC for Chido and Apple. Because boundary corners take precedence and then any other DBs in the area depend on how many slot WRs there are.

Getting on to Flowers, we can really see the last point in live action. Other than 1 random snap where Flowers lined up wide at CB over Waller, pretty much every one of his snaps came in the slot area. But his positional tag would depend on how Waller was lined up. If Waller was split out in the slot, then Flowers is a SC. If Waller is an in-line TE, then Flowers is a LB. If Waller is in-line and Flowers lines up deeper than the LBs in off-coverage, then he's a SS. But anyway you slice it, he had one role in this game, to match up on Darren Waller.]

Hargreaves played 3 snaps while Hilton was banged up. The first was the disgusting DPI on 4th down that extended a Raiders drive near the end of the 3rd quarter. To continue beating the same horse, Hargreaves was manning TE2 Moreau on the play despite being 6 inches shorter instead of having Wilson cover him.

It looks odd at first, but I didn't have Chido as "Active" for a single play against the run all game. He typically lines up on the right side which is the offense's natural weak side, so most runs aren't in his direction and even when they were, by design the Raiders weren't involving his WR in the blocking assignments so Chido didn't have to do anything.

In terms of coverage, this wasn't one of his better games IMO and PFF agreed giving him a 63. He did have a higher Win Rate than Apple (57% to 45%) but his Loss Rate was too high matching Apples (29% to 26%). Can't have your CB1 losing his matchups nearly 1/3rd of the time. We'll get into more detail later in terms of the specific coverage assignments.

I mentioned in another thread that Hilton was basically the MVP of this game defensively, but I'd split it between Hubbard and Hilton. This guy was a menace both in coverage and in run support. There aren't many 5'9 CBs who can play aggressively against the run like he can, or that can zip off the edge in a blitz as smoothly as he does. He is so good at hiding an incoming blitz and then still has the quickness to get off quickly and get to the QB without having to telegraph it first. But his coverage was just flat out excellent in this game, with a 71% Win Rate and only 2 losses in his 28 active Snaps.

Flowers had some ups and downs with 7 wins and 3 losses across his 17 chances, netting out to a mostly average performance on the day. But, when having to match up against an elite TE like Darren Waller, average is basically excellent. Waller did have 7 catches for 76yds on the day, but most of that came when other defenders were on him. When Flowers was on Waller, Waller only managed to catch only 2 balls on 5 targets for 34yds. Flowers was a big, big reason for why Waller didn't have a huge impact in this game.

I already went over Hargreaves disgusting DPI call on that 4th down, which is why he got a -3. But he did follow that up with a nice blitz 2 plays later with a great Hilton impression. Obviously not much to go on here with only 3 total snaps and just 2 active snaps. But just a terrible look to be committing DPI as soon as he comes on the field for Hilton. 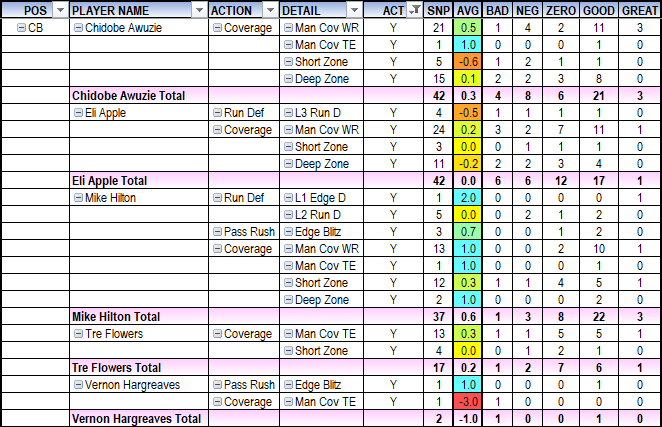 First off a comparison between Man and Zone. I have Chido being in Man 28 times compared to Zone 33 times. So a fairly even split, but I did mention earlier that we seemed to play more Zone by default and the redzone but for obvoius passing situations there was a lot of Man mixed in.

So the area where Chido struggled in this game was with his Short Zones, where he was downgraded on 3 of 5 chances. A really odd look. He also made several mistakes in Deep Zones, mainly Cover-3 or Quarters looks, where he was downgraded 4/15 times. However he does some good work in those Deep Zones too with a 53% Win Rate so it's not all bad. Not quite as good as the 67% Win Rate he had in Man though.

Apple had more 0's mixed in with his Man coverages than Chido, resulting in a lower 50% Win Rate. He played slightly more Short Zone than Chido (10 total vs 7), which would come in either Cover/Tampa-2 or Cover-6 looks. He made more mistakes in Deep Zones with a 36% Loss Rate, which is why teams like to target him on those Deep Posts a la the Chiefs.

Hilton was good in almost every facet in this game, but his Man coverage was exceptional. I had him with an 86% Win Rate and not a single negative in 14 tries. That 1.0 average over 14 snaps is EXCELLENT. His Zones were okay, and as mentioned I thought he was effective when asked to drop into a Tampa-2 Deep Half role, which he did 3 times and was upgraded in both Active chances.

Flowers played Man on Waller on 17 of 21 total snaps, and in 13 of those I considered him Active. I said there were some positives and some negatives, but a 46% Win Rate and just 15% Loss Rate against a guy like Waller is impressive, even if it only nets to a +0.3 average on the day. His Zones were much more mediocre and I'm guessing that's why they brought on Bailey a few times, because they aren't enamored with Flowers as a zone defender from the slot. 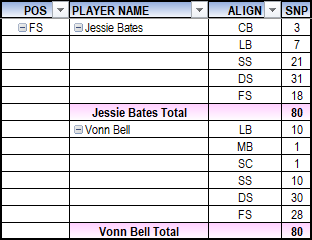 Both Bates and Bell played the entire game, but a couple things jump out at me here. First off, no Ricardo Allen. We've used him throughout the year for some 3-safety looks, but he didn't see the field in this one. With Flowers taking on the Dimeback role against Waller, that removed the need for a 3rd safety in the gameplan.

But it was also very interesting to me that Bell played more single-high than Bates in this game. For some nomenclature definitions here....a FS refers to a single-high safety while DS is a 2-deep safety. SS would refer to a DB who has dropped down into the box area and isn't over a slot WR but is also deeper than the LBs. To get a LB or MB tag it would mean they are aligned as a true box defender with the LBs but not over a slot WR.

So Bates aligned as a single-high FS just 23% of the time compared to Bell's 35%. That is REALLY interesting to me, given that Bates is supposed to be our elite CF guru. I've mentioned several times that I think the smart move is to move on from him this offseason because his CF skillset doesn't suit Lou's scheme, which wants interchangeable safeties and I think this proves it. Look at the following splits:

Bates played more in the box than Bell did! MAYBE this was gameplan specific for Waller. Bates did only man up on Waller 6 times, but he was also in a Short Zone another 13 times so maybe on the majority of those snaps he was also 'in the vicinity" of Waller to prevent the Raiders from going in his direction? I dunno, but very weird to see these kinds of splits when we supposedly have one elite CFer and one elite hard-hitting box safety, yet they're seemingly playing opposite roles in this game.

I mentioned earlier that Hubbard and Hilton likely shared defensive MVP of the game, but Bates has a good claim to it as well. PFF gave him the highest coverage grade for any Bengals defender on the day, and I'd say he earned it. That +0.7 avg over a massive 27 snaps comes via a 52% Win Rate and a miniscule 7% Loss Rate. Simply, very very few mistakes from this man in Coverage. Contrast that with Bell who did have a decent Win Rate (44%), but his Loss Rate was MUCH higher at 26%. Neither of these guys contributed much in run support. With Bates playing so much FS and DS, and the Raiders passing the ball so much, he just didn't have the snaps to earn a meaningful grade.

The final chart of the day. Congrats if you made it this far. Bates had more Man coverage responsibilities than Bell, 10 snaps vs 5. But Bates was also tasked with manning up a WR 3 times compared to zip from Bell, who solely covered TEs and RBs. And you can see why they heavily used Flowers on Waller in this game - when Bell was in Man on a TE he lost both reps. His zones were better, but he still isn't anywhere close to Bates. Bell posted a 45% Win Rate in Deep Zones, to go with a 15% Loss Rate. Bates.....was nearly perfect with a much better 67% Win Rate coupled with a ZERO loss rate. Zero. He didn't lose a single snap in Zone Coverage all day. In fact he only lost 2 coverage snaps PERIOD all day, once in Man on a WR and the other in a Short Zone, out of 27 total attempts. That is damn impressive.

In summary, I really liked what I saw from Hubbard, Hilton, and Bates in this game. Some of Hubbard's success can be attributed to his plus-matchup with RT Brandon Parker, but his hustle and power were on display almost every snap. Hilton was a pitbull in the slot no matter what his assignment was, run or pass. And Bates was nearly flawless on the backend in coverage. I will also say Reader was VERY good against the run, but the Raiders simply didn't run it a lot as they trailed all game and then losing Jobi and Daniels likely contributed to tiring him out late. And IMO I think Hill is as good as Jobi and this game proved it.