Going through and grading Burrow first from this game, but wanted to cover 2 plays I saw on the 2nd drive which were both related in nature but speak volumes about ZT's creativity and ability to design an offense.

#1 was the 2nd play on the 2nd drive, where Mixon ran for 16 yards. On the face of it, this play isn't anything special - a Power run where we pull an OL from the backside to lead through the hole on the front. Big deal.

First thing I want to point out is the motion from Chase. We start in a 2x2 with the TE split off the formation so nice and balanced. When Chase gets sent in motion though look at the effect it has on the Buffalo underneath defenders, how they slide out wide to account for any quick dumpoff to Chase. This is of course because they're clearly concerned with Chase to begin with, but couple that with having 2 blockers out in front of him including a detached TE, and that's sending off alarm bells in the defense for a quick screen to Chase. 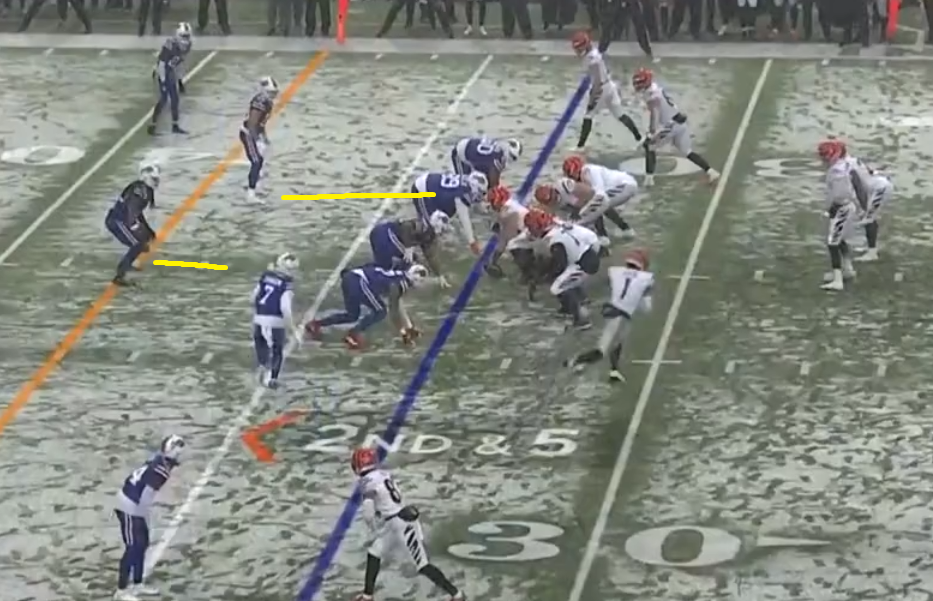 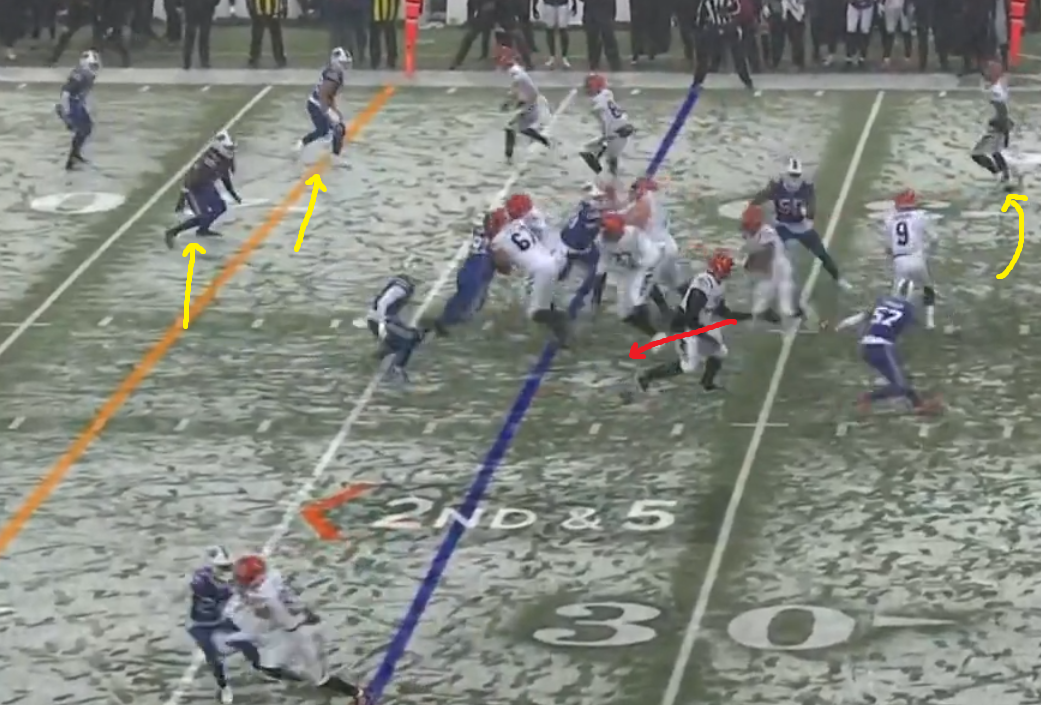 Not only does this remove 2 defenders from the box to cover the possible screen to Chase, it removes both LINEBACKERS from the box. This looks like Cover-6 post-snap given 2 deep safeties and the way LB Milano gets out into the flat underneath CB Tre'Davious White. Pre-snap the Bills have 2 CBs on the near side to match Chase and Tee and 2 LBs in the box. But because they're in zone, once we put Chase in motion now we've unbalanced their underneath defenders. This forces LBs Milano and Edmunds to slide out and cover the possible screen, removing both of them from the box entirely, and it leaves slot corner Taron Johnson to slide in as the only "LB" in the box. So not only is this a favorable run situation because of the 2-deep safety look, but now we've removed the 2 LBs from the box and replaced them with just a slot corner. This is a gigantic win for any run game.

The next creative wrinkle here would be using Adeniji as the puller, instead of the backside Guard which is much more common mainly because of timing - it's easier for a Guard to get out of his stance and get frontside to lead the RB because he doesn't have to travel as far. A backside Tackle would have further to run and often times be too slow to get there and contribute in a meaningful way as a blocker. What this does though is make the "reach" block easier on the backside NT. If you're pulling the backside Guard without help in the way of a downblock on the NT from the Center, that means the only available candidate to block the NT is the backside Tackle. Which means a huge reach block in terms of leverage and likely immediate penetration from the NT followed by a Mixon cutback into the backside DE (who is left unblocked by design). Having Adeniji pull frontside instead means Scharping is free to take on the NT, which he doesn't do well on this play but he does do enough to not allow that instant penetration to blow the play up.

The next thing I'd want to point out is Carman's block on the front side. My usual gif maker isn't working so I can only post a screenshot. 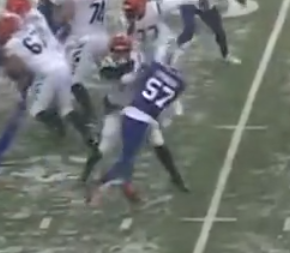 Just the way he tosses DE Epenesa into the backfield to seal off the edge. Epenesa doesn't seem to have good contain anyways, as it looks like he might be trying to swim around Carman on a speed rush. But either way Carman was having none of it and just tosses him 1 handed out of the play entirely, helping to leave a HUGE hole for Mixon.

And part of that huge hole is also caused by the massive double-team on the frontside from Volson and Karras, who just blast Ed Oliver backwards almost 5 yards. Meanwhile Adeniji just deletes the slot corner in the hole. 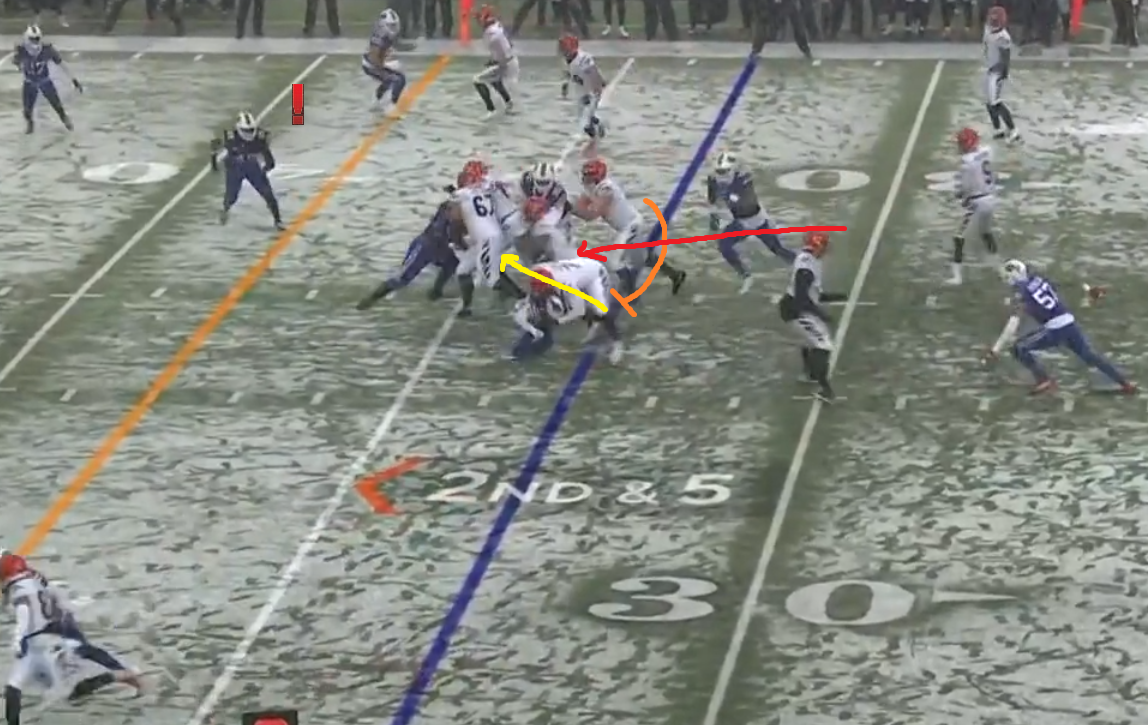 This all combines to allow Mixon to go 12 yards untouched before he rams into the safety and winds up with a 16yd gain. The window dressing with the Chase motion and backside screen threat helps to create a very favorable run situation in the box, and then the OL does a great job executing against that light box to create a big gain. Just look at this hole he has to run through.

We follow this up 4 plays later with what is basically a crack toss play to Chase when he lines up in a split back look with Perine who leads Chase like a FB. Basically we're broadcasting very early in this game, that we intend to use Chase in a lot of different looks and are getting creative around the LOS to get him the ball, so BE READY Buffalo. TAKE THE BAIT. And they are ready, getting a lot of bodies wide in a hurry to stop Chase after just 3 yards. 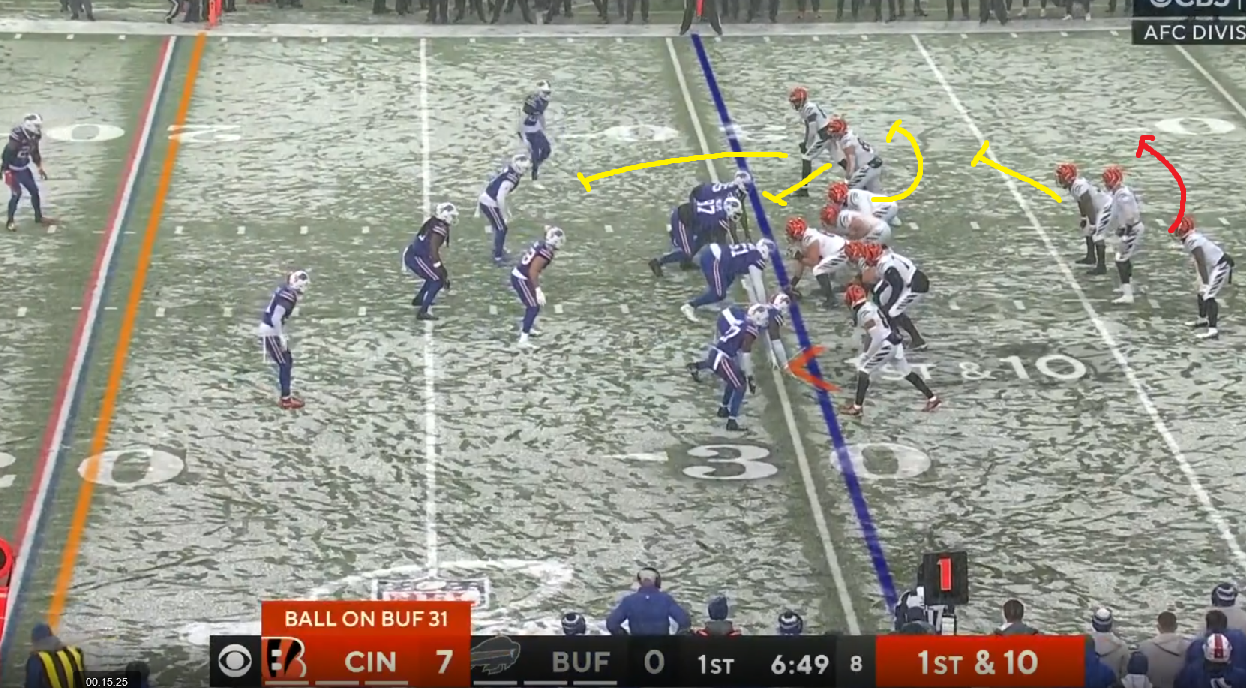 But it comes back to bite them literally 5 plays afterwards, costing them an easy TD.

The Bills are in what seems like Tampa-2 here, given the 2 deep safeties and MLB Edmunds getting depth down the seam at the snap. So they should be in a perfect position to shut down what we have called here, which is a hole shot to Hurst down the far sideline. Edmunds helping out in the deep middle should allow the deep safety on the far side to cheat towards the sideline and easily pick up Hurst when he releases deep. 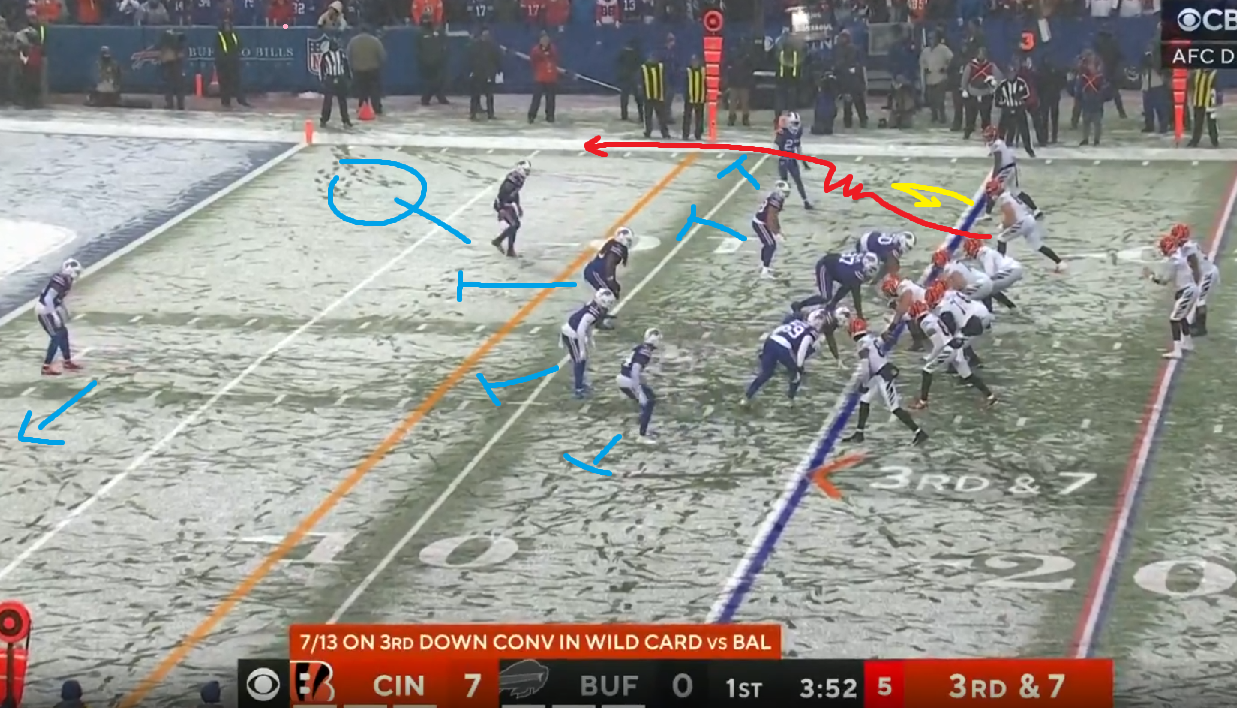 But we all know that's not what happens. This was likely something they saw on tape from the Bills, aggressively targeting underneath stuff at the LOS. And they'd been dangling bait with Chase underneath twice already this drive alone. So when Chase makes his cut back towards the LOS like he's about to catch a screen, while Hurst seemed to be lining up a big block with the way he aims his release off the snap...the Bills pounce. 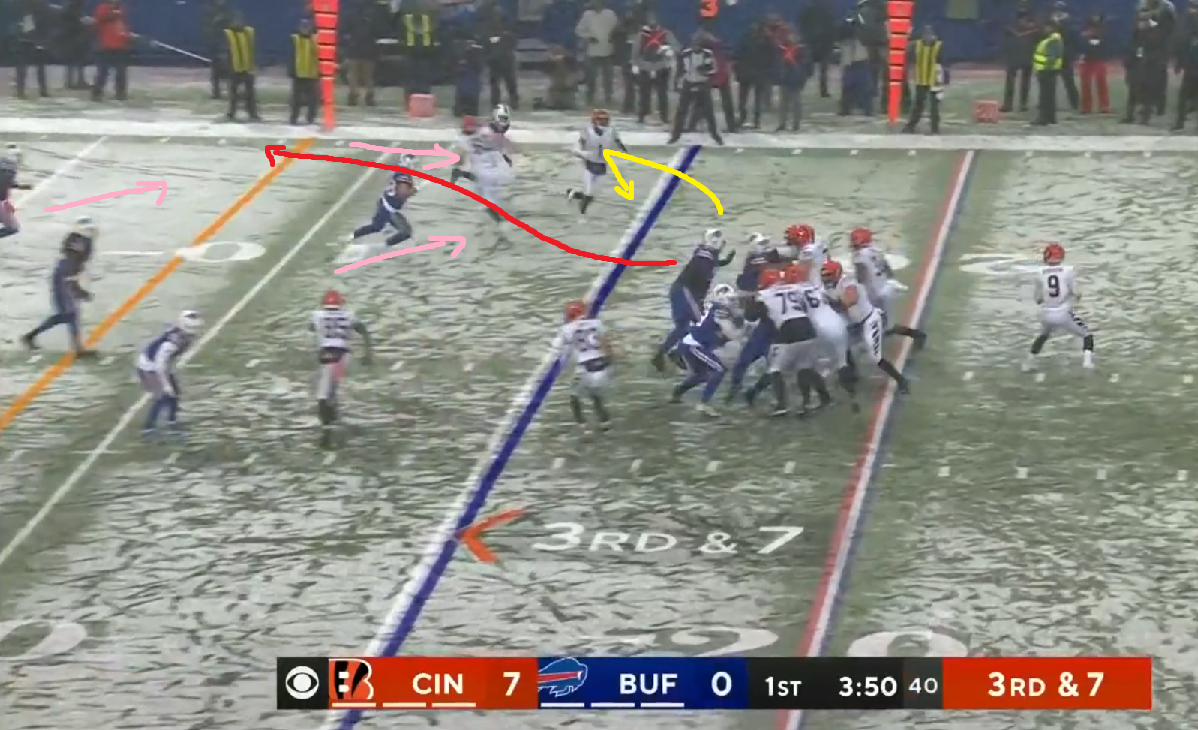 Hook, line, and sinker. The CB in the flat, Milano in the hook/curl, and even Poyer in his deep safety role all bite HARD on the screen action underneath. Both Chase AND Hurst do a great job selling this, with Chase feigning a catch and turn, and Hurst aiming right at the boundary CB off the snap.

Touchdowns don't get much easier than that in the NFL. But credit is definitely due to ZT and the coaching staff for this one. They noticed it during game prep and they designed some stuff around it to bait Buffalo early and set them up for it. Credit where credit is due.