The polls are closed. Thousands and thousands have voted. We listed five nominations for player of the game during Cincinnati's 27-24 overtime win against the Buffalo Bills.

The third-year quarterback needed a little goodwill from the base, after taking it on the chin during a poor set of games against the Browns and Patriots. And he did what could, completing 26 of 40 passes for 337 yards passing and tossing all of Cincinnati's touchdowns to A.J. Green, Giovani Bernard and Marvin Jones. It wasn't elite, but it was good enough.

Dalton is only the second offensive player to win the award this year, following Giovani Bernard's MVP against the Pittsburgh Steelers in week two. 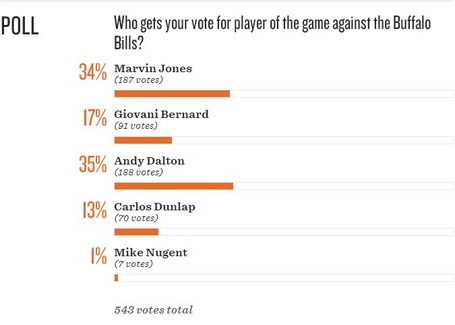