Play(s) of the Game Against The Bills: The Goalline Stand

It's not a difficult argument to make for this one.

Share All sharing options for: Play(s) of the Game Against The Bills: The Goalline Stand

Some complained (surprise) that our nominations for plays of the game didn't include touchdowns. We actually pointed out in the opening on Monday that touchdowns are naturally the biggest plays of every game due to the impact that they naturally have. We wanted to highlight non-touchdown plays that helped define the game that are otherwise pushed aside (as if Giovani Bernard's jaw-dropping touchdown wasn't going to win).

We listed three nominations for best play (or series of plays) during Cincinnati's 27-24 win over the Buffalo Bills. The nominations were the team's goalline stand in the second quarter, the special teams exchange in overtime and Mike Nugent's game-winning field goal.

The goalline stand changed everything, stoning Buffalo's effective running game while leading to a momentum-building 98-yard touchdown. The overtime special teams exchange lead to a field goal attempt, which won the game.

It's not hard to figure which play/series won.

One could, and probably should, argue that Cincinnati's second quarter goalline stand was the moment in which Cincinnati's offense woke up. Buffalo had generated 126 yards on offense in the first quarter, converting all four of their third down opportunities. On their first possession of the game, Buffalo went 65 yards on six plays, taking a 7-3 lead in the first quarter. They followed that up with a 60-yard possession on 16 plays.

But it was that 61st yard that alluded Buffalo.

The Bills have second and goal from the Bengals one-yard line when the second quarter began. Vontaze Burfict and James Harrison stoned Fred Jackson for a no-gain. Taylor Mays and Vincent Rey matched the effort on third down, setting up a fourth and goal from the one. Thad Lewis rolled out right but lost a yard when James Harrison wrapped the quarterback for a one-yard loss and turnover on downs.

It was a run-away vote. 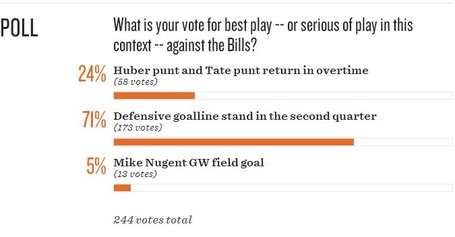