The CJ voters have spoken and voted Marvin Jones as the MVP for Cincinnati's week eight win over the New York Jets.

Share All sharing options for: Marvin Jones Wins CJ MVP Against The Jets

One would think that a quarterback throwing for five touchdowns would dominate the voting for player of the week in Cincy Jungle's weekly nomination. Only that one his receivers, Marvin Jones, set a franchise record for most touchdowns in a single-game, scoring four on the afternoon.

Jones claimed just under two-thirds of the vote with Dalton grabbing a third and A.J. Green and Adam Jones grabbing the rest of the votes. 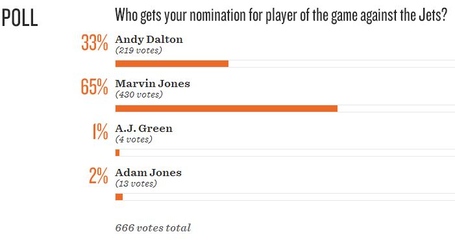