We nominated and you voted for the MVP against the New England Patriots.

Cincinnati Bengals defensive end Wallace Gilberry is one of the many examples why this team's depth is so good. Normally when a player like Michael Johnson, who posted the second-most sacks (11.5) in a single season since 1983, goes down with a concussion, things don't go well. Instead, Gilberry ensured that Cincinnati's defensive production kept truckin' on, pressuring Tom Brady four times and generating two quarterback sacks on third down that forced New England to punt in the first and fourth quarters.

Gilberry was nominated as the AFC defensive player of the week, but that award went to Oakland Raiders defensive back Charles Woodson.

On the other hand, Gilberry overwhelmingly won the MVP against the New England Patriots at Cincy Jungle, giving us four defensive players in the first five weeks into the season (not particularly surprising). 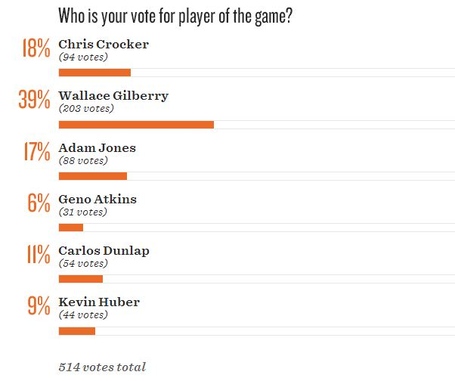