Bengals quarterback Andy Dalton was a topic for discussion on Monday, but this time for having a good performance on Sunday.

At some point on Monday, attention was directed at the team's perspective on quarterback Andy Dalton; which offers suspicious timing on a confusing topic after the quarterback submitted his best effort of the season; I suppose answers are far more elusive during losses and therefore not really worth digging into. But everyone is in a good mood, so let's talk Dalton and avoid the talking points between a divisive fan base that's not unlike political rivals in Washington. 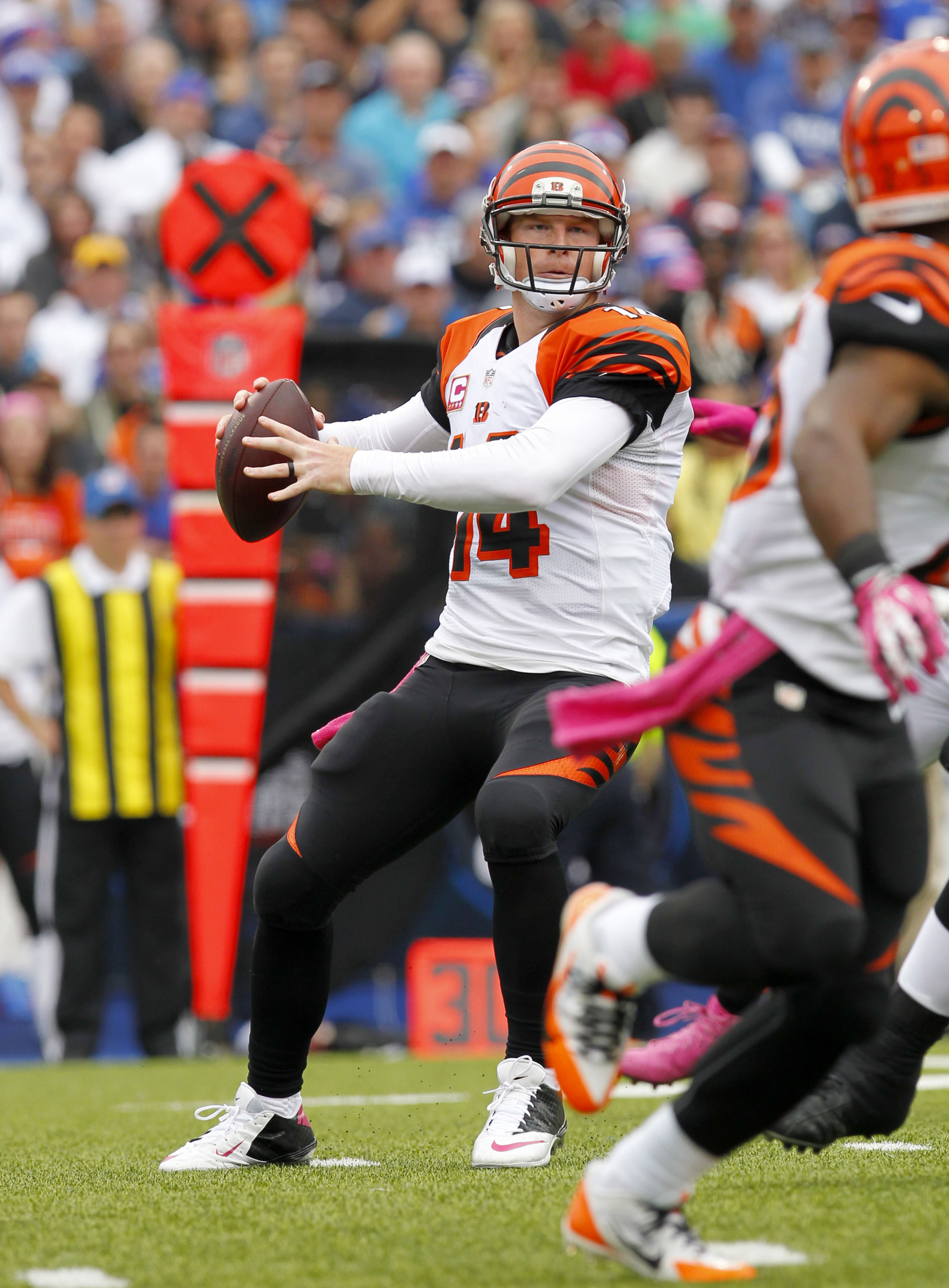 Andy Dalton had a good game against the Bills with a handful of excellent throws. We take a look at three of them.

Bengals head coach Marvin Lewis was specifically asked on Monday to compare Dalton to his predecessor, Carson Palmer after Lewis said that he believes that Dalton is being unfairly compared to other NFL quarterbacks. The quote that wins the money was the comparison to Carson Palmer.

"I don’t know that his predecessor has won these kinds of games week in and week out, you know?" Lewis said. "The ultimate goal we all have is to win the football game, and we wish it could be 10s across the board, but that doesn’t necessarily do it. If we had a 10 last week on defense, we didn’t quite make a 10 yesterday. That’s the way it’s going to be through the NFL. Last week’s recipe is not going to be next week’s recipe."

Dalton was credited with a game-winning drive against the Buffalo Bills, despite the offense's established goal of winning field position on Sunday. Once the Bengals reached the Bills 37-yard line, special teams and defense took over, eventually allowing the offense to run the football three times to give Mike Nugent preferred positioning, if not a reduction of eight yards before the game-winning conversion.

"I told (Nugent), you are going to kick a field goal to win the game and just be ready. That’s part of it, we drove down there, had a chance for a field goal, he hit a big one," Dalton said after the game.

"Throw the ball 35-40 times and you probably are going to make a bad decision or two. You are not going to be perfect. We are happy with what he did." -Bengals OC Jay Gruden

It's Dalton's eighth game-winning drive in three seasons, which also accounts for 32 percent of every win since '11. For the sake of comparison, Palmer was awarded nine game-winning drives after his third season.

"Andy’s doing well. He’s directing our football team. We’re in a good spot and we have to keep going," Lewis said on Monday. "We can’t recreate history. Those guys created a timeline. Andy has his own timeline going on, and right now it’s pretty good."

"What I was most impressed with yesterday was a lot of the touch passes. Yesterday he threw a nice touch pass to (wide receiver Dane) Sanzenbacher over the middle where he one-handed it. The touch passes on the swing passes were outstanding. He gave A.J. Green a chance on the corner route. Nice and high over the top, which is great to see something we really have been harping on to give it to him up and outside where he can go and get it. He really did some good things."

Beside Marvin Lewis, who are making these comparisons? The media? Fans?

We know that Dalton can be a good quarterback with excellent touch. His touchdown passes to A.J. Green and Marvin Jones shows that. We know that pressure doesn't affect him as much as it should, or the second down throw to Mohamed Sanu isn't made in overtime, nor are any of the eight game-winning drives over the past two-plus years; or the 15-yarder to A.J. Green against the Steelers that sent Cincinnati into the postseason.

Joe Reedy with the Cincinnati Enquirer has an excellent observation regarding the team's game-plan, pointing out why the team decided to use a short passing scheme against the Bills that led to a 253 yards after the catch on Sunday; which may indirectly quiet Jay Gruden detractors.

What most tend to ignore though is how the game plan the past two weeks has shown the range of the passing game. Against New England, it was a steady diet of passes to tight ends Jermaine Gresham and Tyler Eifert. They combined for nine receptions and 77 yards against the Patriots but had only four for 18 in Buffalo.

On Sunday, with the Bills being among the league leaders in sacks, Gruden went for the quick passing game, using Bernard, Green and Marvin Jones on flares and screens. Bills defensive end Marcell Dareus said after the game that it caught Buffalo completely off guard because it was something they hadn’t seen from Cincinnati before. During the first five games, the Bengals showed some of it on screens to Bernard but not with Jones and Green.

There are obvious criticisms. Once you filter out those with blind irritation towards Dalton because of the "deep ball", the criticisms are warranted, from bouts of inconsistency to locking into A.J. Green and holding onto the ball during a quarterback sack -- not that that is black and white either (sometimes there's no other options).

But the criticisms aren't raised from unfair comparisons to the league's elite quarterbacks. It's the five consecutive punts in the fourth quarter and overtime, or taking the sack on second down with 11:45 remaining in overtime. But who hasn't had these struggles? Last year's media darlings Andrew Luck and Robert Griffin III weren't very good this weekend in losses to the Chargers and Cowboys respectively. You think that they're avoiding criticism, along with 100-million dollar quarterbacks Matt Ryan and Joe Flacco? Again with the comparisons.

But again, the fourth quarter (lack of) production is not entirely fair to place on Dalton's shoulders. Gruden focused more on milking the clock using a combination of BenJarvus Green-Ellis and Giovani Bernard between the tackles that guarantees an extremely limited success rate -- the Bengals are averaging 2.79 yards when running up the gut, ranked 28th in the NFL. Giovani Bernard averaged less than one yard on six carries in the fourth quarter, mostly all between the guards. And Jermaine Gresham dropped a third-and-12 throw (in extremely tight coverage) with over seven minutes remaining in the fourth quarter.

I'll never promote the idea that people should have blind faith towards anything; it upper-cuts the idea of individualism into non-existence and everyone should base their fluid conclusions on the evolving information available to them. There will be losses against the Cleveland Browns again, maybe even this year. And most of us reacted accordingly to it. It happens. Nor should people with anti-Dalton talking points be so obsessed with downgrading Dalton by ignoring quality performances only because it might lighten those perspectives. There will be wins against the Buffalo Bills again. It happens. And we're reacting accordingly now. Information changes. It's alright to change your opinion.

In the end, you're your own person. Make your own conclusions. You shouldn't lock those conclusions into the vault of eternity. Things change and conclusions will need significant revisions. Or let's just ditch the "conclusions" part entirely, stick with what we know and react on a weekly basis instead of announcing our final observations that offers no room for improvement.

"I put enough pressure on myself," Dalton said late Sunday afternoon. "I want to come out and I want to play the best I can every week. Everybody can say whatever they want but everybody in the organization knows what is really going on and so for me, it was good to come out and play well. Not only so that there will hopefully be some positive stuff written about us but just for this team, just to get a win. The most important thing is for us to win the game and we were able to do that today."